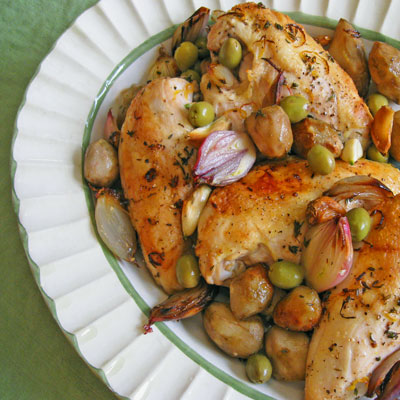 Roasted Chicken Breasts & Jerusalem Artichokes I am making a roast chicken recipe. This recipe has a lot of bold flavor in the form of shallots, garlic, lemon zest and green olives. But it also features a fairly unknown little vegetable called a Jerusalem artichoke or a sunchoke.

One of the many things I love about this vegetable is that they are neither from Jerusalem nor are they artichokes! You gotta love a misnomer like that!

Jerusalem artichokes (also called sunchokes) are known to botanists as Helianthus tuberosus.  They are the tubers of a type of perennial aster that looks like a small sunflower.

Jerusalem artichokes look a bit like ginger root. But they have a delicate nutty flavor. Somewhere between a water chestnut and jicama, but when cooked they take on texture somewhat similar to potatoes.

As I said, they are not from the Middle East as their name suggests. They are actually a North American food product dating back as far as 1585. Sir Walter Raleigh documented Native Americans cultivating this tuber in what is now Virginia. 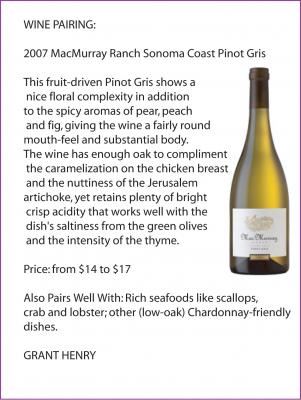 Wine Pairing Of The WeekIt eventually found its way to Europe and was greatly improved through selective propagation by the French, who called it topinambour (which is also their term for an ill-mannered, loutish oaf of a person).

I have heard them called Canadian Potatoes in a restaurant in Vancouver, where they seemed to be more popular than they are here in the U.S.

I see them regularly at my grocery store. Not every time I go, but they seem to be there rather consistently, so they do not appear to be a seasonal vegetable. That’s probably because like a potato they travel and store well.

I am most familiar with them in a cream based soup paired with potatoes. Their delicate nutty flavor is very well highlighted that way.

But I am using them whole as a potato substitute. I am going to roast them along with chicken breasts in a very hot oven.

I originally pulled this recipe out of Martha Stewart Living magazine. That little scrap of paper has rumbled around in my desk drawer for years. I finally decided to either try the recipe or throw it out.

Well I tried it and I am glad I did. It was a very impressive dish. The bold use of lemon worked well with the garlicky chicken. The little sunchokes held their own quite well too; despite their subtle flavor. I guess they are like a potato that way. 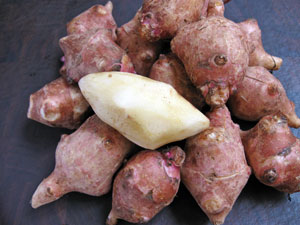 I followed the magazine recipe fairly faithfully (for me at least). It turned out well and I liked it very much. But I have to be honest.  I decided to re-write the recipe making a few simple changes that make it work better for me.

The recipe suggested a 500-degree oven. I roast whole chickens in a 500-degree oven all the time. It is a good way to cook a smallish bird with nothing but a little salt and thyme rained down on the skin. The high heat and the low humidity from an un-stuffed, small well-dried bird makes a mighty nice, crackly skin.

But these chicken breasts had a lot of wet things going into the oven with them. So I adjusted the temperature down to 450 degrees and I think it was a good call. Why burn the sunchokes in an attempt to get super crackly skin, when the humidity fairly much assures us of only getting a moderate crunch. 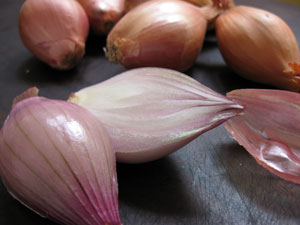 Secondly the recipe says to peel the sunchokes, and I did. I if were to make this again, I think I would just give the sunchokes a good scrubbing with out peeling them. I read that the bulk of the nutrients are held just below the skin and will peel away easily. Besides I can’t imagine the thin skin to be any sort of bother when roasted as these are.

Like I said the flavors are pretty bold. So choosing the right wine to accompany this recipe is key.

So this is a good time to announce that my brother Grant will be joining us more regularly to make wine pairings happen. Afterall, you can’t have Sup with out a little Sippity! 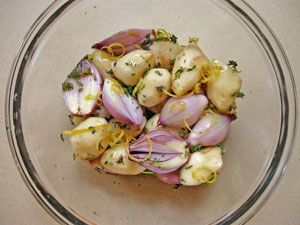 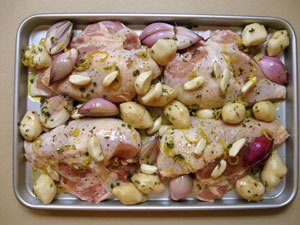 1. Preheat oven to 450 degrees F. Rub chicken breasts on all sides with 1 tablespoon of the olive oil. Then liberally season them with salt and pepper.
2. Place chicken into a shallow sided roasting pan or jelly-roll sheet pan. Arrange the chicken in a single layer leaving as much room between each breast as possible. Set aside.
3. Zest one of the lemons into long strips. Zest the other lemon with a fine grater such as a micro-plane. Keep the zests separate and set them aside. Juice both lemons into a small bowl and set it aside.
4. Combine the strips of lemon zest, whole garlic cloves, Jerusalem artichokes, halved shallots, and 2 tablespoons of the thyme leaves. Add the remaining 2 tablespoons of olive oil and season well with more salt and pepper.
5. Pour this mixture over the chicken, tossing as you go until all the chicken is well coated.
6. Roast the chicken until golden brown, about 40 minutes. 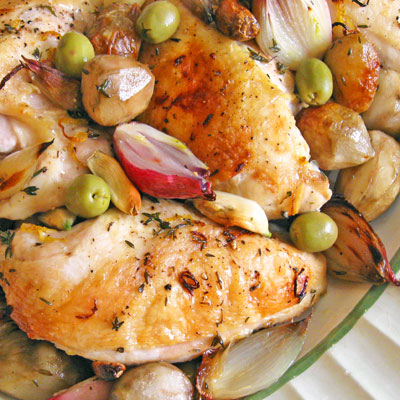 7. Carefully remove the hot chicken from the oven, and add the reserved lemon juice, wine, and olives. The pan will sizzle, so quickly scrape up any of the crusty brown bits and deglaze as well as you can with the chicken still in the pan. Scatter the diced butter cubes all around the pan.
8. Return the pan to the oven, and cook an additional 10–15 minutes until the sauce has thickened slightly.
9. Remove the chicken from the oven and transfer everything to a large serving platter. Garnish with the remaining grated lemon zest and serve hot.