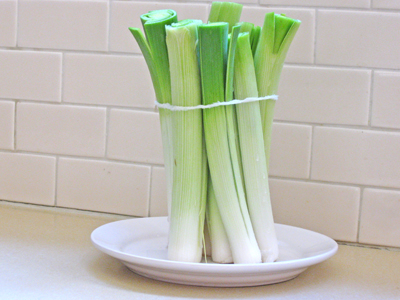 Time once again for another Market Matters. I am choosing the leek. While it is true that leeks are generally available any time of the year. It should be noted that traditionally they were a warm climate wintertime crop.

Leeks really are one of those cornerstone ingredients. They play support so very well in soups and stews. They are indispensable in many broths and sauces.

In France, the leek is known as poireau, which oddly enough is also a derogatory term meaning “simpleton.”  But the leek is anything but simplistic. The leek has a very refined, subtly sweet flavor. Far more nuanced than its cousin the standard onion. I think it deserves the spotlight once in a while. And thatâ€™s just what I intend to do. So get ready Mr. DeMille, Allium porrum is ready for her close-up!

Thought to be native to the Mediterranean and Middle Eastern areas, leeks have been cultivated for more than 3,000 years. They have long been popular in Europe. But have only just begun to become a staple here in the U.S.A. Thatâ€™s in a large part due to foodies like you! So good job!

But this also means I donâ€™t have any â€œat the readyâ€ ideas about how to give this gal her starring role. I need inspiration.

That is just where my head was when I was walking down the hill today to the Hollywood Farmers Market. It was a spectacular day. Warm and bright. The kind of weather that makes you glad to be alive. 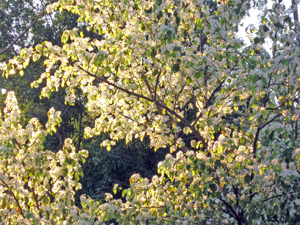 I know that technically it is still winter. Chances are where you are things are still a bit chilly; maybe even frigid. After all, itâ€™s the beginning of February. But what I noticed, as I was heading out the door… in my neighborhood, Spring had Sprung! The ornamental pear tree in my yard was in full regalia. I just had to stop and admire it.

Between the weather and the blossoms my mind made an irreversible right turn toward springtime classics. Fava Beans! Peas! Asparagus!

Asparagusâ€¦! Thatâ€™s when it hit me.

I would do leeks as a stand-in for asparagus. Iâ€™d do a Chilled Leeks in Vinaigrette with Eggs Mimosa! When made with asparagus it is a classic French Bistro dish. And the leeks are a perfect replacement for the asparagus.

Leeks can be quite succulent when cooked well. Rich, almost creamy. A lot like my favorite of all the asparagus. Those big fat monster spears you find early in the growing season. Before they get thin and a bit woody (which I also loveâ€” especially grilled. Yum.) But I digressâ€¦

Back to leeks. At their core they are sweet, but with a lovely acidic finish. Like I said they also have a rich, fatty quality.

They will pair wonderfully with the very simple vinaigrette I have planned and a nice big pile of minced, hardboiled eggs. The acidity and the fat balance each other well and will exactly mimic and articulate the similar qualities of the leeks themselves. If I didnâ€™t know myself better Iâ€™d say I was a genius.

But the truth is, somewhere in the back of my brain, I think I remember eating this exact dish before. In some obscure Bistro in the 3Ã¨me or 4Ã¨me arrondissement of the Marais. Itâ€™s all a red wine induced haze. So forgive me if I cannot give proper credit where it is due.

Just so you know the eggs Mimosa style that accompany this dish are named after a lovely Medditeranean bush or small tree with bright yellow flowers. Just another springtime metaphor to placate my weather induced Spring Fever. Here in Los Angeles we call this group of plants the Acacia, and they are just getting ready to come into bloom. It’s glorious when they do too! So this little factoid may have played a role in my decision making process as well.

To make this you are going need a dozen medium sized leeks. Reject any over an inch thick. We want to control the cooking time as well as possible.

Remove several layers of tough outer green leaves and cut all the lengths to about 8 inches. Trim the little rootlets from the ends, but do not go crazy here and trim them too high up the leek. We want them to hold together during cooking.

Cleaning a leek well is very important. You need to remove the grit and dirt that is always between the layers. It is a much easier task when you are chopping or dicing them. But we want them left mostly intact lengthwise. So try this trick:

Starting at the root end stick the point of your knife into the white part about one inch up from the very bottom. Then slice the leek upwards lengthwise all the way through the green tops. It will kinda look like a

clothes pin. You can then wash between the layers taking care to leave the white root end intact.

We are going to boil or steam the leeks because we want them well cooked; so that they become soft and succulent.  Easy to cut when plated.

To get them ready for boiling or steaming you should tie all the green leaves together in one bunch, not too tight though. You’ll want the water or steam to be able to circulate.

You can now boil or steam the leeks vertically or horizontally depending on the pan you choose. If you boil them, the water in the pan should completely cover the leeks. They may float a bit at the beginning but as they cook they should submerge. Check on them regularly to be sure. If you steam them make sure you have a tight fitting lid.

When they are totally tender. Almost to the point of mushy (but not quite) remove them from the water.

At this point your instincts might be to quickly plunge them into an ice bath to stop the cooking. But in this case it is unnecessary.

When they are cool enough to handle release them from bondage and discard the string. Cut through the root ends splitting them in half completely. Place them into a shallow dish, cut sides up. Season them a bit with salt and pepper.

Now itâ€™s time to marinate them. You may choose a commercially prepared vinaigrette if you like. But choose a very plain one. Nothing with too much fabulousness. That means no balsamic, no raspberry, or any of the other crazy concoctions Wishbone can conjor up.

Me, I prefer my own recipe, which is 2 parts red wine vinegar to 1 part canola oil. I now also add 2 or 3 dollops of Dijon to my basic 2 cups of vinaigrette recipe. As I recently learned in the aioli demonstration this really helps in the emusification. 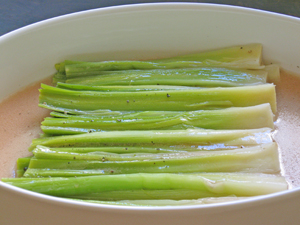 This vinaigrette is a good base to start with when making a dressing for salads. If I were going to use it for that purpose I might add additional flavoring as basic as shallots, or as crazy as dried cranberries. But for this marinade I think plain is best.

Whatever marinade you choose dilute it with 1/3 volume water. A good rule for this recipe is 2 cups vinaigrette to 1 cup water. But this depends on your leeks and your dish. Use your own judgement. Thatâ€™s why God gave it to you.

Marinate the leeks at least overnight and up to 3 days.

When you are ready to serve this, hard-boil a dozen eggs. Let them cool and peel them. Cut each egg in half lengthwise and separate the yolks from the whites. Dice them separately to keep the final product pretty. 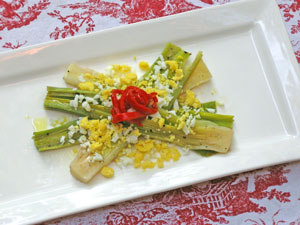 Remove the leeks from the marinade. Then plate the leeks in individual servings or on one big platter. Thatâ€™s up to you. Top them first with the egg whites followed by the egg yolks. A garnish of diced chives and/or thin strips of roasted red pepper is a very nice touch. I took the “mimosa”, “springtime”,” flower” imagery a little too literal in my plating. So forgive me for that. Sup ain’t usually so sweet!

As a final flourish (as if it needs one!) give it a little salt, pepper and a drizzle of really good olive oil. And “action” ‘cuz these babies are ready for their close-up. â€œSmile honey, thatâ€™s right youâ€™re fabulous!â€