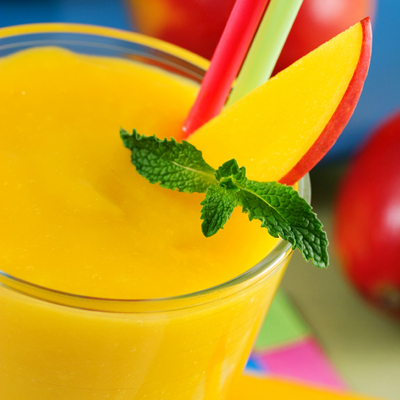 I smell a holiday. A holiday I typically spend in the raging heat of the Palm Springs desert. Which means I’ll probably spend a lot of my time blending up something cool and frothy. Oh yeah, it may have a kick in the ass from rum too. Did you know rum was most especially the American spirit of the 13 original colonies? Well it was. Making it perfect for the 4th of July holiday and a real hot weather lifesaver. So let’s celebrate America with this  Mango Rum Cooler.

I think cool and icy blender drinks were probably invented in Palm Springs or at least for Palm Springs. Because there’s a street in town called Fred Waring. There are lots of streets named after famous people so it’s easy forget that the names have significance in this town. But that’s not the case with Fred Waring. I am quite sure why Fred got such a major throughfare named after him. Sure he may have been a famous bandleader, but his real claim to fame is far more lasting. In fact every time I drive down the street named for him I think to myself, “Fred Waring, wherever you are I’d like to kiss you right on the pucker. Because you my wise friend brought us a summertime lifesaver: The Bar Blender!”

It’s quite a contraption too. Capable of pulverizing an ordinary “on the rocks” cocktail into a frosty, smooth summertime thirst quencher. If it weren’t for you, Mr. Waring, the famed Tiki drinks of the 1930s wouldn’t exist. Daiquiris would remain shaken or stirred. Margarita would just be an island in the Caribbean. 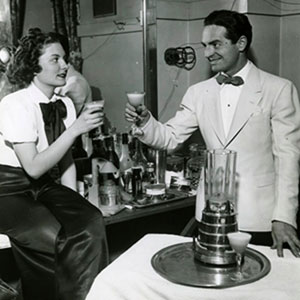 Thanks to you, plain ole schmucks like me can transform ice, alcohol and fruit into a pleasurably slushy treat. We can kick back 3 or 4 potent fruity concoctions and never know what hit us.

Now I know you did not exactly invent this machine. That honor goes to another Fred named Osius (you know as in Osterizer). But it’s you Mr. Waring who saw its potential. It’s you who put your wallet where your pucker was and fronted early production and design of this whirling little beauty.

Maybe it wasn’t the nicest thing in the world to fire that other Fred and have your team put his machine through some redesigns. But it was those redesigns that finally made this baby sing.

Because you were the man who believed in the future of the Bar Blender even through its early failures I give you credit for its success.

Sure you were a big time bandleader– that could have been enough for an ordinary man. But you saw more and pushed harder. You were the genius that went on a one-man marketing campaign beginning with the hotels and restaurants you and your band toured. It’s you who brought the machine to the public by assuring a place for it on the shelves of upscale stores such as Bloomingdale’s and B. Altman’s. But mostly because you Mr. Fred Waring, once bragged to a St. Louis newspaper, “…this mixer is going to revolutionize American drinks.” And so it was….

So pucker up and take your reward like a man! SMOOOOOCH. GREG

Combine all the ingredients (except garnish) in a blender; process until smooth. Divide and pour the mixture into 2 stemmed glasses, and serve garnished with the reserved mango cubes and mint leaves as garnish. 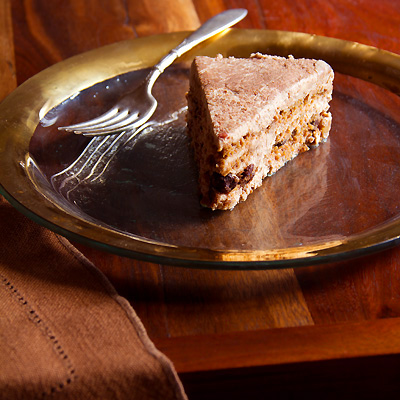