Leek & Potato Soup, Not That I’m Dwelling On It 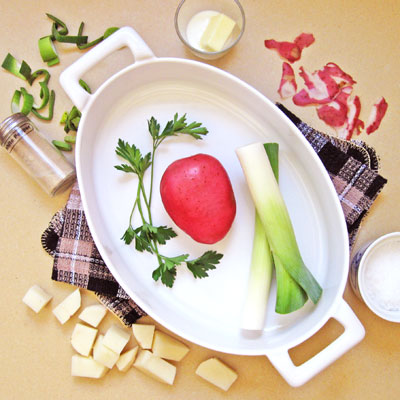 I have decided to quit dwelling on my particular (short term) handicap.

I mean you don’t need the excuse of having your mouth wired shut to enjoy a smooth, velvety cup of soup. Lots of people with perfectly functioning mandibles eat soup. Oh wait that sounds vaguely like I am dwelling upon my affliction. I am not.

That’s because, as the jingle goes, ‘soup is good food’.

For today’s good food I choose a Leek & Potato Soup. It’s finished with just a touch of cream. Which adds a luxurious bit of richness with out being overly indulgent. Because honestly, a touch is all this soup needs to be creamy and delicious.

This soup is strongly associated with the French. Serve it chilled and you would call it a vichyssoise. Though vichyssoise was actually ‘invented’ in New York at a French restaurant.

Still, I love classic French cooking. I have a lot of opinions about it too, especially for some one who is not French! I am the type of American who might have invented vichyssoise. 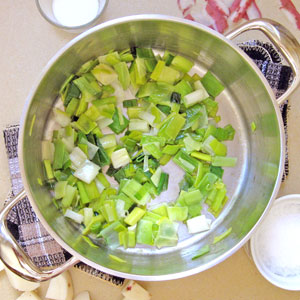 When many of us think of French soups our mind automatically turns to French Onion Soup. French onion soup succeeds on many levels. Its utter lack of pretension is just one winning aspect of this soup. Leek & Potato Soup too excels at simplicity.

But in many other ways French onion and leek and potato soups are polar opposites. Onion soup is typically the specialty of informal and inexpensive restaurants in France. But leek and potato soup is more usually regarded as ‘la cuisine de bonne femme’ in its homemade version.

But in my opinion onion soup and leek and potato soup go hand in hand and are inextricably linked with a particular style of Parisian cooking. Humble yet hearty. Eat in or eat out they are gastronomic symbols of the social and psychological lives of many Parisians.

In its most basic form (my favorite form) Leek & Potato Soup is nothing more than a couple of medium leeks that are trimmed down to the white and light green parts. They should be rinsed carefully to remove the inevitable sandy, mucky grit, and roughly chopped.

You then saute them in a few tablespoons of butter over medium low heat in a good-sized soup pot until soft.

I use 1 1/2 pounds, more or less, of peeled potatoes cut into chunks to 2 chopped leeks. The ratio is amendable to your particular taste. I follow the advice of Joel Robuchon and use waxy red potatoes. They have a lighter potato flavor and are less heavy and starchy on the palate. But I promise you any type of potato is fine. In fact a great many chefs in France favor brown potatoes. In any case the chunked potatoes are tossed in with the leeks and butter. 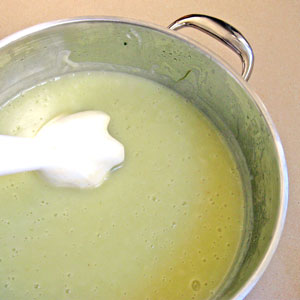 You should then add just enough water to cover the potatoes and the leeks. Add a couple big pinches of salt and bring the pot to a boil.

At this point turn the heat down to a simmer and cook until the potatoes begin to disintegrate; about half an hour.

I usually use the back of my spoon to gently break the potatoes down to a rough puree once they are soft enough. This way it is quite easy to use an immersion blender to finish the job resulting in a smooth velvety texture.

An additional dollop of butter is also a very good idea. I personally like a tiny bit of cream (less than 2 tablespoons) stirred in right before serving. Though this is not a mandatory amendment.

I usually choose finely minced parsley and white pepper as a garnish. But chervil, chives or even a bit of herbes de Provence are also acceptable options.

This may seem like the simplest of flavor combinations. And there is certainly nothing too difficult in achieving perfection in this preparation. But don’t let the apparent simplicity fool you. There is intricacy too. Good potatoes will be mellow, but they will define the subtle sweetness of the leeks. 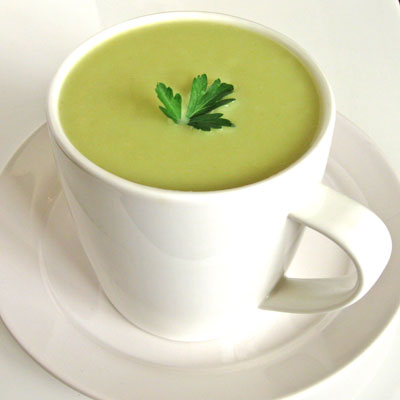 In return the leeks augment the earthiness of the potatoes. The tiny addition of fat in the form of butter and optionally cream adds the smoothness to the texture. And like all fats it transforms the flavors so that they harmonize in the mouth.

The overall effect is of psychological well being. And believe me if you had your jaw clamped shut with sharp pointy wires, you’d need all the well being you can get. Not that I am dwelling on my predicament. Why would I?