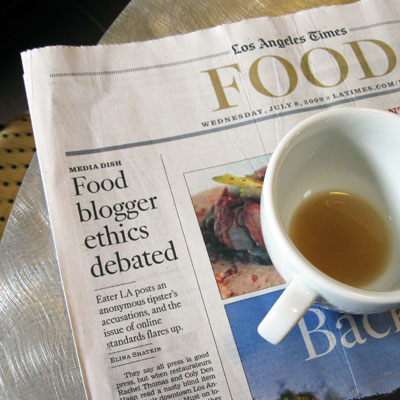 Did you see this?

It’s an article in today’s LA Times Food Section. It’s about the ethics of food blogging, written by Elina Shatkin.

I have given a lot of thought to the ethics of SippitySup. I don’t really do restaurant reviews. Which is the focus of this article. But I might someday. Still many of the points in this article are quite relevant to so many of us, and may be worth a little soul searching.

Every time I post a recipe I think about its accreditation. I am not sure I have ever run a recipe that was absolutely someone else’s (except my mother’s and brother’s). I often find recipes I love from a variety of sources. But I tweak them to suit my tastes and cooking skills. I then say it was adapted from a source. I will often say that a chef or cookbook inspired a recipe when I took a broad concept and made quite a few changes.

But after that there is some gray area.

Many times I make something that I once ate someplace. I had no recipe as I attempted to recreate it. Often it takes several attempts for me to get something I am happy with. But this food memory may come from years ago and I have no idea about its source. I certainly can’t even say how close to the original it may be. I usually consider these recipes my own and give no credit.

How about a recipe that started out as someone else’s but has morphed so many times over the years that it bears very little resemblance to the original? Is this a SippitySup recipe?

Then there are those recipes that are pretty much universal, but I have my own way of preparing it. Surely this is my own creation. Or is it?

Several food blogs have attempted to publish a “code of ethics”. The LA Times mentions Egullets code (which I have included here). But readily admits there seems to be very little interest from bloggers to adhere to such a standard.

Are bloggers just spouting their own opinions? Or do we have a responsibility to adhere to some journalistic standards. Is a food blog a public source of information or a private journal?

I mean, if these are just private opinions, why are we sending them out to the blogosphere to be read by any and all for now until forever?

The following I credit to Egullet.

Original content. All content is the original creation of the author except when clearly attributed, such as by quotation marks, citations and credits.

Respect for intellectual property. All text, photos and other media from outside sources is republished only with the explicit permission of its owner or as authorized by an applicable license (e.g., Creative Commons), with the exception of brief quotations from written works in the context of discussing those works.

Links where credit is due. Where the creator of content referenced on this website has made it possible to link to that content, a link is given here. Where the content is not directly linkable, as in a book, a full citation or link to a general information page will suffice. In general, links are favored over reproduction of content.

Disclosure of comps. Where a free or discounted product or service has been accepted, a corresponding disclosure is made.

Disclosure of conflicts of interest. Where the author has a relationship with the subject of coverage beyond a casual or typical customer relationship, that relationship is disclosed. Financial and employment relationships, including those of close friends, associates and family members, will also be disclosed.

Disclosure in the first instance. Where disclosures are required, they are made in the original entry on the subject. Repeated disclosures will not necessarily appear in subsequent entries in the same series. However, where separate discussion of the same subject occurs, reacknowledgement is made with a separate statement or by linking to the original disclosure.

Fact checking. The author of any factual statement has made a good-faith effort to confirm the accuracy of that statement. Statements of opinion, however, are just that.

Corrections. Where factual errors are discovered or reported, corrections will be made promptly by editing or in a subsequent entry.

Faithfulness to the historical record. Except where overriding legal or ethical concerns prevail (such as when remedying an invasion of privacy), substantive changes and corrections will be made in such a way as not to distort the historical record: by noting “edited to add” or the equivalent, or by making clarifying statements later without changing the original.

Terms of service (for website operators). This website abides by a published list of rules that cover, among other things, participatory conduct, use of anonymity, and consequences for violations of the terms. It can be found by clicking the “Terms of Service” or equivalent link on any page of this website. Anyone posting on this site agrees to these rules in the act of registering to participate. Further, this site may operates on a platform (such as Blogger​.com or WordPress​.com) that has a separate terms-of-service document. This site adheres to those terms.

Revision. This version of the eG Ethics code was adopted Tuesday 12 May 2009. This code will be revised, updated and clarified from time to time. The latest version of the code along with elaboration and discussion can always be found at eGullet​.org/​e​t​h​ics.