Get Inn to Ohio: The Inn & Spa at Cedar Falls 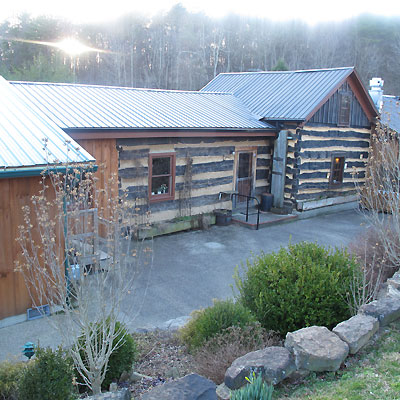 I’ve always heard that mid-westerners were friendlier than your average American. Quick with help, generous with handshakes, and honestly “tickled pink” just to have a conversation and a smile. But I live in the big city and I believe that it’s good to be skeptical of stereotypes. I also believe that stereotypes sometimes have a faint ring of truth to them. Still, it’s not like I set out to prove or disprove this theory when I recently headed off for Ohio. Once I got there I’ll admit I had plenty of “uff da” moments as I experienced firsthand some of that famous mid-western spirit.

Especially at The Inn & Spa at Cedar Falls. The Inn is located in the Hocking Hills area, a destination of spectacular natural beauty and a favorite of many a mid-western outdoor and nature enthusiast. The Hocking Hills State Park is defined by deep, water-carved gorges filled with shimmering pools and cascading water falling from glacier-etched rock formations. It’s an area where the maple sap runs and brittle blue skies sparkle.

The Inn & Spa at Cedar Falls opened in 1987. It started as a dream of Anne Castle, who recognized that the enormous beauty of the area wasn’t as accessible to visitors as it should be. In fact, before she opened the inn there really wasn’t much lodging suitable for most travelers. Her vision was 2 1/2 years in the making. Like many American dreams there were difficulties, setbacks and some “mind-bending discouragement”. But Anne didn’t seem to focus on those things and neither shall we. 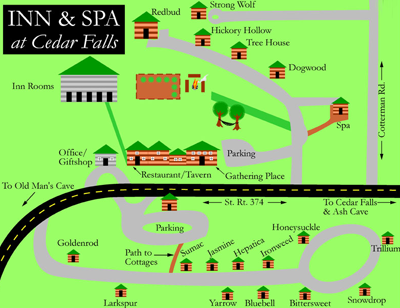 Today the inn seems a full-fledged success– offering three types of accommodations nestled into 75 wooded acres surrounded by Hocking Hills State Park. Which should be enough privacy for just about any traveler seeking a tranquil place to unwind. That quiet ambiance continues into antique-filled guest rooms furnished either with two twin beds or a queen-size bed to suit all needs. Across the ravine you’ll find a cluster of rustic cabins from the 1840s that have been collected, reassembled and remodeled. They now offer decks with porch swings and full kitchens. Each cabin is set privately on its own patch of woods to take advantage of all that peace and quiet. There are also cottages for those who have more modern sensibilities. These have 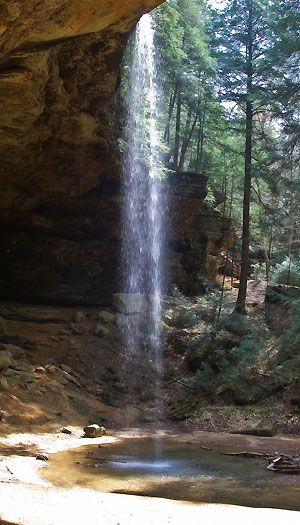 queen or king-size beds, romantic two-person whirlpool tubs, gas log stoves and personal refrigerators for stowing even more romance in the form of something bubbly if you like.

We arrived in time for lunch and immediately sat down at a table in the colorful dining room located inside another authentic log cabin. Which is what I call service with a smile (and a pedigree). I happened to be seated across from Anne Castle’s daughter, Ellen Grinsfelder. Ellen and her husband Terry Lingo are the innkeepers now, jobs they are well suited to, fortunately for me. Because I arrived with a problem that needed solving. I was exhausted. If I didn’t find a few minutes to lie down nobody in my immediate vicinity was going to be happy. Ellen is a doer, I learned that about her right off. In between bites of her lunch and the telling of the tale of this beautiful inn, she rearranged my schedule so that I could see the Inn, its cottages and cabins, have time to hike BOTH to Cedar Falls and Ash Cave, while still finding room for a nap before dinner.

Which is a good thing, because it was a beautiful spring-like day and I was really looking forward to the hikes to see the falls. So while some in our group enjoyed a full range of pampering in a secluded cabin set with all the spa luxuries you’d expect, a handful of the rest of us took a peaceful walk in the woods with Ellen as our guide. It was during these walks that I got to know her a bit. From my point of view I’d say Ellen is a passionate traveler. It’s probably how she got so good at knowing just what her guests are 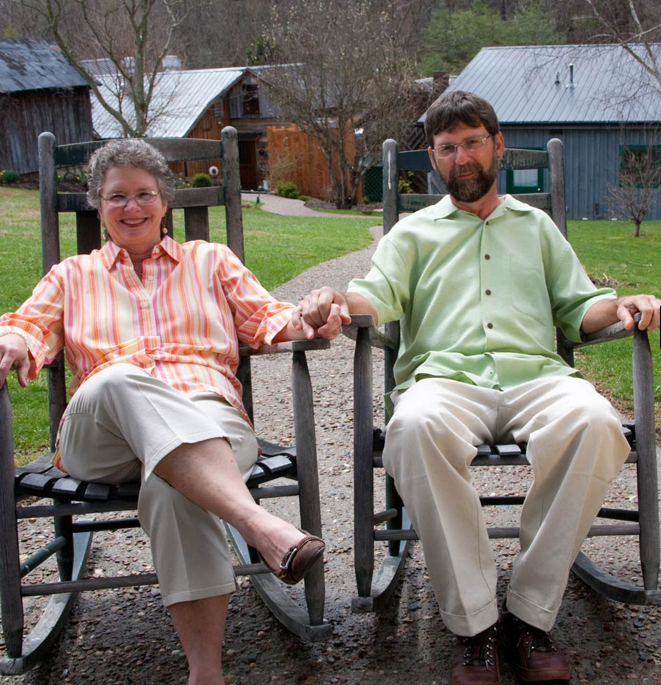 looking for. It’s the details at The Inn at Cedar Falls that really struck me. Ellen and Terry have made sure there is every comfort without ever losing sight of the fact that this is a country inn– way out in the woods. I’d say there was a standard of excellence completely appropriate to the experience. So there’s WiFi for blogger freaks like me, but no annoying cell phone service. So I actually felt un-plugged and un-burdened. See what I mean about appropriate details?

The pace of these parts of the woods is pretty low key, meaning a meal at The Inn at Cedar Falls is, again appropriately, one of the highlights of your stay. The talent of Chef Anthony Schulz assures this fact. Innkeeper Terry Lingo puts it this way, “Anthony brings a freshness to our restaurant menu. He combines using local produce and healthy cuisine to create a new menu each season. His skill and pride in the food he prepares are a welcomed addition 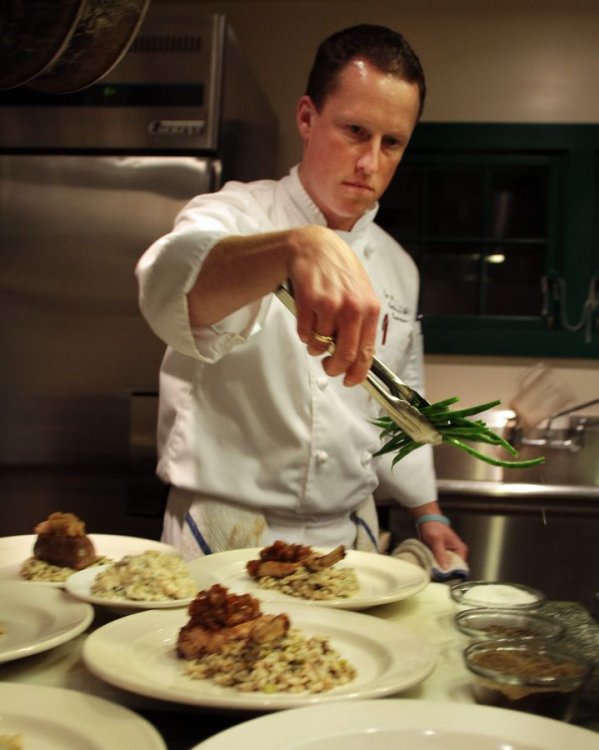 to our restaurant.” I’d call that statement accurate. The dining room features creative American cuisine artfully served. Since this was a sponsored press trip, part of its purpose was for the writers invited to experience the very best the inn has to offer. So we were also treated to a special meal that paired Chef Shulz’ great food with creative cocktails featuring locally produced liquor from Middle West Spirits which was one of the highlights of the trip as discussed previously in this series.

Furthering the enjoyable dining experience is an open concept kitchen. Guests can watch their gourmet meals being prepared by the chef, or stare dreamily into their partner’s eyes. Both of which are way better than TV, right? But, if you’re more of the “hands on” type there are also special cooking classes offered at different times during the year. Check the schedule before you arrive.

As I said Ellen’s mother Anne started the inn. It was Anne who hired local contractor Terry Lingo to build the inn and its various buildings. Ellen moved to the area 6 months before opening of the inn in 1987. Terry and Ellen met during this exciting phase and married shortly after. Sadly Anne died 4 years later. The inn and its legacy is now in the hands of Ellen and Terry. Ellen described her role at the inn to us this way – I’m paraphrasing, but I hope I get it just right. She said the inn was a baby born to a mother but raised by a daughter. That almost feels too personal of a story to share on this blog. I even think I saw Ellen’s eyes get a bit misty in the telling. But she offered it so honestly and with such good will, I feel that I can pass it along here. Because it really does define the sort of love you know went into making The Inn and Spa at Cedar Falls so special.

Ellen was so generous sharing her story, she even managed to get me to open up a bit and share some of mine. She seemed interested in my life in Los Angeles and my travels as well. I told her about my upcoming cookbook and, without losing a beat, the doer in her came right out and in the friendliest way you could ever imagine Ellen was enthusiastically planning to have copies of my book available right there on the property, in the gift shop.

And I just couldn’t help thinking– ahh mid-westerners, there they go … being nice again. GREG 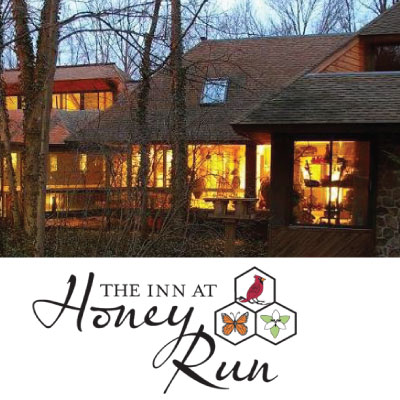 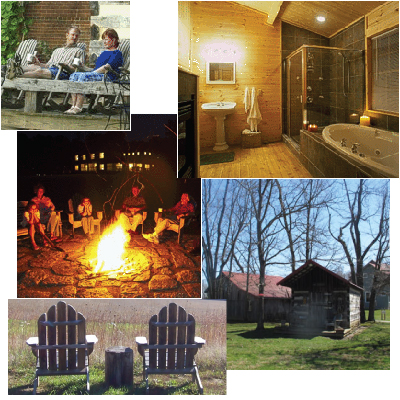