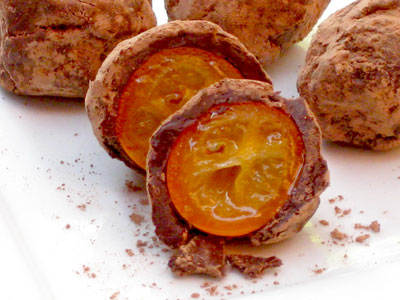 In case you are curious, my kumquat liqueur is coming along nicely. The fruits are starting to give up their color. So that means the vodka is taking on their flavor.

But I still had quite a few kumquats leftover.

What to do, what to do? In my last post regarding kumquats I called them the bon-bon of the citrus world. Because mostly, I just pop one in my mouth and call it done.

But that phrase bon-bon kept coming back to me. Bon-bons are typically chocolate. What was stopping me from turning these kumquats into chocolate-covered kumquat bon-bons.

People are always dipping things like strawberries into chocolate and making pretty little dessert yummies. But that’s just a little too expected. Don’t ya think?

Besides (here comes another confession), chocolate does not “wow” me. I mean I like chocolate, but when there is another choice on the menu I almost always leave chocolate behind.

No, straight-forward chocolate all alone, is not quite a complex enough flavor for me. But I do like the idea of a chocolate covered kumquat. Still, there has to be a way to deepen the chocolate experience enough to make it worthy of the intense, slightly earthy quality of kumquats.

I recalled that Michel Richard does a chocolate-covered grape. He tells a story in Happy in the Kitchen about serving some to friends after a large meal. “No thanks, I’m full” was their response. But at his insistence, they tried one. But “when they bite in and get a juicy, tart squirt of flavor, they always reach for another”.

There you have it. I would manipulate his chocolate grapes recipe to work for my chocolate kumqut bon-bons! Yea! I had a plan.

So I took the last pound of kumquats I had and I put them in the fridge to get good and cold. Instead of hand-dipping each one in straight chocolate, which is of course time consuming. As well as a bit too expected. I followed Michel Richard’s method of doing a pound of fruit all at once in just a few minutes.

Start by melting 4 ounces of 60% semi-sweet chocolate. The chocolate should not be super hot when you work with it, so test it by tasting. Body temperature is just perfect.

Next put the cold, dry kumquats into a large bowl. Large enough that they can all roll about easily. Add the chocolate to the grapes one spoonful at a time; stirring and folding as you go. Scrape the sides of the bowl as you work with a rubber spatula. The idea is to build the chocolate up in coats as it hardens around the cold fruit. Keep working until the chocolate begins to set and the kumquats are completely covered. 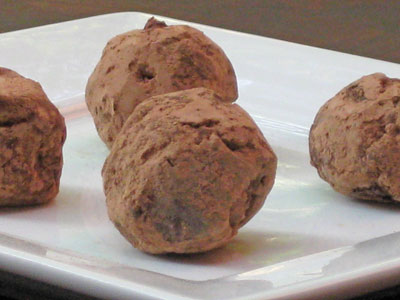 When the chocolate has nearly set, sprinkle about 2 tablespoons of cocoa over the chocolate covered kumquats. Use a small mesh strainer to cover them lightly little by little. Continue working by tossing and folding (I required 2 people to make this work, but if you have four hands you may be able to accomplish this on your own).

Working the cocoa in gradually and moving them around the bowl allows them to harden as you go and not stick together. When they are well-coated and separated move them to a parchment covered baking sheet. Cover them with plastic wrap and refrigerate until you are ready to serve them. I rolled mine in an additional coating of cocoa just before I served them. Michel does not with his grapes. So either way you want works fine.

To me the extra cocoa adds a deeper more complex level to the chocolate. It’s slightly bitter, and a great counterpoint to the bold citrus flavor of the kumquats.

So give it whirll, a roll, a spin. I think you’ll have fun.