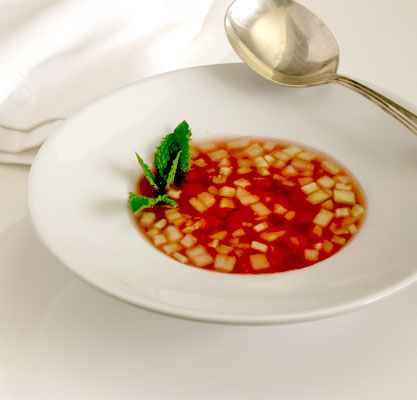 Do you recall that episode of The Simpson’s when poor, clumsy Homer somehow manages to make the barbecue pit explode in a violent flash of flame? Naturally, he’s freaked out because the only “summer food” he can wrap his brain around comes from the grill. But what about watermelon?

The look of sadness that crosses his face as he realizes his precious red meat burgers went up in flames is classically Homer! But, there are even bigger laughs ahead as little Lisa Simpson waltzes in carrying a great big bowl of something cold, red and soupy-looking– while merrily announcing: “Good news! You don’t have to eat meat! I’ve got enough gazpacho for everyone!”

Good laughs, I say. But little Lisa’s gazpacho imagination seems a bit limited. I think the soup she presents to the assorted gathering of Springfield’s oddball population is the rather generic Andalusian-style gazpacho. It is chock-full of tomatoes and cucumbers and is thoroughly associated these days with Spain.

Now I am not knocking Lisa’s gazpacho – I’m sure it’s a wonderfully flavored, cold soup full of fresh healthy vegetables. I bet it tastes like a “chunky liquid salad”, just as it should.

But if we look at the roots and origins of gazpacho I think we’ll find that originally gazpacho was neither Spanish nor made from tomatoes and cucumber. 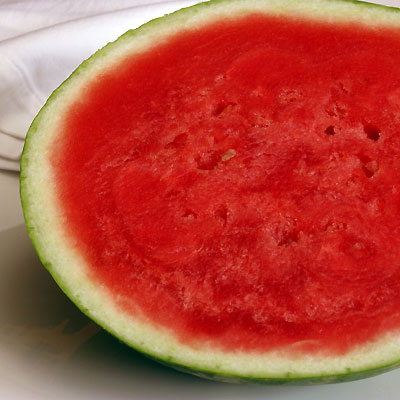 Depending on which side of the Mediterranean you sip your soup, the earliest versions of gazpacho are found in the soup bowls of the Roman Empire or the Moorish ones across the sea.

If you pay attention much to history you’ll see that both of these groups occupied Spain. In fact, there was a 700-year period when they had plenty of time to make a culinary impact on the Spanish people. So, to set the gastronomic record straight we need to allow for the fact that many of Spain’s great cooking traditions can be traced back to a bunch of neighborhood bullies!

Take gazpacho as a fine example. The Bully Romans and the Meanie Moorish both had a soup made of bread soaked in olive oil, garlic, and salt. The Roman version used a bit of vinegar, while the Moors used nuts as the foundation of their soup. Notice I have not mentioned tomatoes? Well, to get to the root of how gazpacho could be tomato-less we need to go back to the history books we were consulting earlier.

Because all of this happened before a certain Spanish explorer named Cortez set sail for the new world. It seems that this Cortez guy noticed that the Central American people he was busy destroying seemed to love a certain shiny red fruit indigenous to the area.

Well, that conquistador snatched up as many tomato plants as he could and sailed them back to Spain.

But those wacky Europeans decided that tomatoes were poisonous, so they never got around to seeing the decorative fruit as food until the 1700s. That’s when a great famine overtook Italy and the poorest of the poor decided to take their chances with poisoning rather than starvation. Well starve they did not, instead, they thrived and tomatoes became a staple in European cuisine. 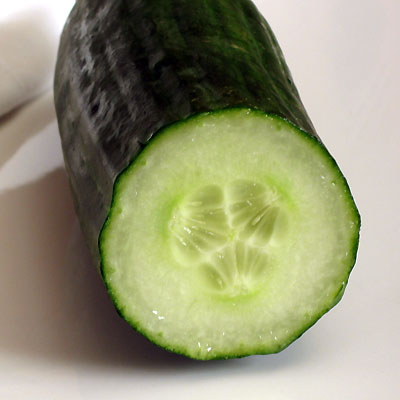 Up until that time, the cold soup that evolved into today’s gazpacho was typically made with almonds– or sometimes grapes. But once tomatoes were introduced they found their way to the climatically friendly area of Spain known as Andalusia. And modern gazpacho was born.

Gazpacho is easy to make, and variations on the basic recipe are open to the cook’s own innovative ideas. I have seen it made with jalapenos; I have seen it include seafood. Even sorbet! I recently tasted one in a restaurant that featured watermelon. I was highly impressed with that version. We even called the restaurant for the recipe. Sadly we are still waiting for the chef to call us back. But I have a feeling he may be playing his cards close to the chest. I would have been happy to plug the restaurant here. Oh well, their loss. I decided to make up my own version.

So I turned to my old friend the Internet. There were plenty of good recipes for watermelon gazpacho, but none quite like the one that made me swoon. That version was pureed to quite smooth and fairly liquid. It certainly made you taste the watermelon, but it was not cloyingly sweet like watermelon. It had enough acid and enough sour to balance nicely with the fruitiness of the melon. The only chunky texture in the soup was very tiny dice of peeled, seedless cucumber. But the kicker– and the thing that sent it over the edge was its very innovative drizzle of red-hot chili oil on top. It was served as an amuse bouche and let me tell you my bouche was certainly amused!

So here I present (true to its culinary history) my multi-sourced version of Watermelon Gazpacho with Chili Oil. Serves 6 CLICK here for printable recipe. I wonder what Lisa Simpson would think? 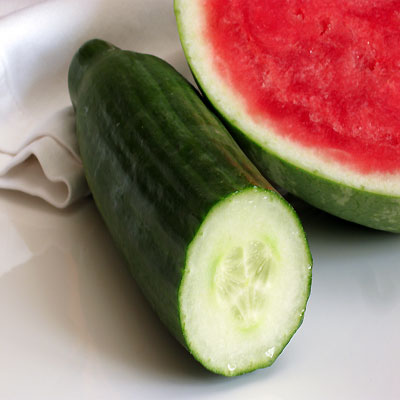 Make the chili oil: Roughly chop the dried chilis. Add the oil to a small sauce pan. Using a candy thermometer, heat the oil to about 230 degrees F. Like all hot oil infusions, the secret to making chili oil lies in getting the temperature of the heated oil just right. Too cool and the oil won’t absorb the flavors; too hot and the chili flakes will burn. Add the chopped chilis and cook until the oil becomes reddish about 12 minutes. Monitor the temperature during cooking. To make it even spicier, add more dried chilis or reduce the oil to 1/3 cup. The chili oil can be used almost immediately, but for best results leave the chilis in the oil for a day to allow the flavors to blend. Strain before using.

Make the gazpacho: In a blender, puree the watermelon, tomatoes, half of the cucumber, and the onion. Pour in the red wine vinegar, lime juice and olive oil, salt, and pepper. Puree until smooth. You may serve it just like this or pass it through a fine-meshed sieve removing any of the solids if you want a more elegant presentation. Chill the soup for at least 2 hours and preferably overnight.

Pour the gazpacho into chilled bowls and sprinkle with remaining cucumbers and a drizzle of the chili oil. Serve. 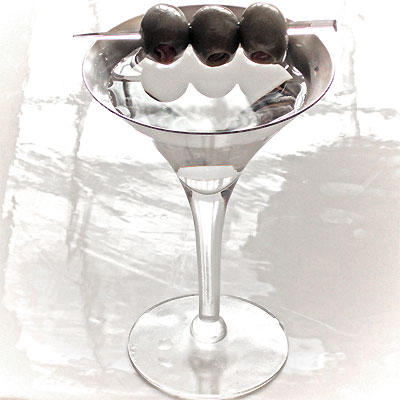