What I Don’t Know Will Thrill You: Bouillabaisse Velouté 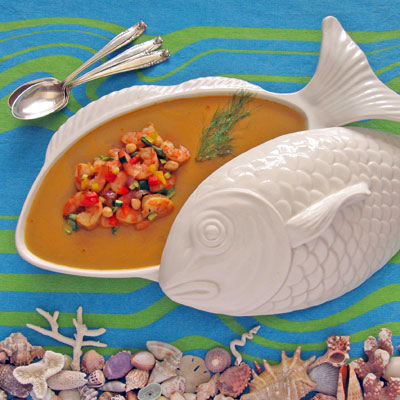 Bouillabaisse Velouté? Boy for a know-it-all there sure is a lot I don’t know.

velouté
[veh-loo-TAY]
One of the five “mother sauces,” velouté is a stock-based white sauce. It can be made from chicken or veal stock or fish fumet thickened with white roux. Enrichments such as egg yolks or cream are sometimes also added. velouté sauce is the base for a number of other sauces and preparations.

I did not know that. I thought a velouté was just fancy French name for a creamy soup.

Rouille
[roo-EE]
Literally French for “rust,” culinarily rouille is a fiery-flavored, rust-colored sauce of hot chiles, garlic, and fresh breadcrumbs and olive oil pounded into a paste and often mixed with fish stock. It’s used as the base in fish stews such as bouillabaisse. But can also be served as a condiment in the classic Provencal soupe de poisson.

I did not know that. Though I have made bouillabaisse plenty of times and could not possibly live with out the stuff in soupe de poisson. 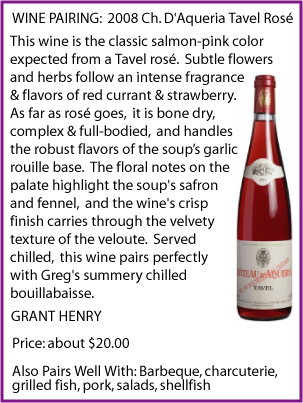 Click For More On Ch. D’Aqueria Tavel RoséSo when I was thumbing through Daniel Boulud’s Cafe Boulud Cookbook looking for soup inspirations. I came across a recipe called Chilled Bouillabaisse Velouté.

Which to me meant a creamy, cold summery soup with saffron and seafood. YUM and YES. Were my first two thoughts.

Next I thought I would use this recipe as a jumping off point and make up my own recipe, using what I know about my mother’s bouillabaisse recipe and an immersion blender.

But I did like the unexpected elements of Daniel Boulud’s recipe. He limited the seafood to really good shrimp, and served sauteed summer veggies strewn across the velvety soup. So those ideas I would steal. The rest would be all me.

My recipe was going to be called Velvety Shrimp Soup Provencal with Summer Vegetable Ragout. I figured I’d make it 2 or 3 times and try and get what I was looking for out of it. Then present here at Sup!

I also figured I would get my brother Sip! to do a wine pairing. So I emailed him my plan.

Well, he asked one simple question and threw my whole plan out the window because I did not know the answer!

The question was: “Will your recipe employ a classic rouille base?”

Grant! Don’t do this to me!

So rather than say to my “baby brother” duh, what’s a rouille base? I frantically searched the Internet, and why I was at it I decided to check out velouté too.

Well, when I found out that a velouté was one of the five “mother sauces”, and a rouille was the iconic element in these Provencal fish soups I love so much, I knew I was in over my head. I navigate much better under the notion that naive is the best tool in the box. Once I become aware that I am operating under a handicap I freeze up!

So, and this is hard for me to admit because I rarely do this. But I followed Daniel Boulud’s recipe word for word.

And now that I have made his soup I think the answer to Grant’s question is “no, this soup does not use a rouille base”. It uses all the same flavors, and is thickened with chickpeas instead of flour. So I guess Daniel Boulud was not afraid to take these flavors and make them his own. He was even willing to tweek a mother sauce. Hmmm…

And I further guess that I learned something today. Heck I even learned several somethings. And I get to eat this soup for dinner. All in all not a bad way to spend an afternoon. 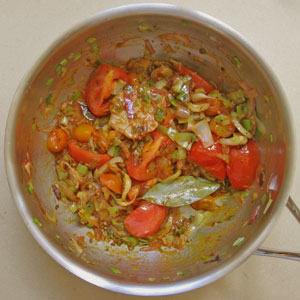 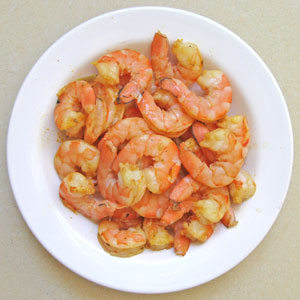 Bring the water to boil is a large saucepan, the lower it to a simmer and keep it there.

Pour the olive oil into a large stockpot set over medium heat. When the oil is hot, add the onion, celery, leek, garlic and fennel, season with salt and pepper, and cook, stirring regularly, for 8–10 minutes, or until the vegetables soften but do not color. Add the tomato paste and fresh tomatoes and continue to cook and stir for 4 more minutes. Toss in the shrimp, herbs, and spices and cook stirring, for 2 minutes or until the shrimps turn pink. 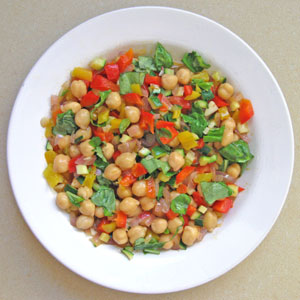 Add the simmering water and cook for 2 minutes more, then, with a slotted spoon, remove the shrimp. Set the shrimp aside for about 10 minutes, so that theyâ€™ll be cool enough for you to remove the shells.

Shell and de-vein the shrimp, reserving the shells, and refrigerate, covered, until needed. Toss the shells back into the pot and let simmer with the soup for another 30–40 minutes, regularly skimming off the foam and any solids that rise to the surface. When the soup has only 5 minutes left to cook, add the chickpeas. Bring the soup back to a boil, and then pull the pot from the heat.

Pour the soup into a blender and puree until smooth (you may have to work in batches). Push the soup through a fine meshed strainer, so that it is smooth and creamy enough to live up to its name, velouté– it should be thick enough to coat a spoon. If too thick, stir in a little water. Check the seasoning, add salt and white pepper, if needed, and then cover and chill. 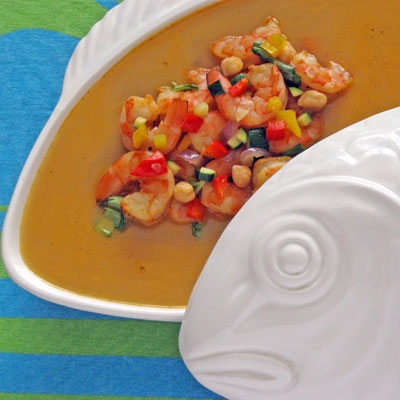 Warm 1 tablespoon of the olive oil in a large saute pan or skillet over medium heat. When the oil is hot, add the onion and peppers and cook, stirring, until the vegetables start to soften but not color, about 3 minutes. Pour in the remaining 2 tablespoons of olive oil and add the zucchini, eggplant, garlic, red pepper flakes, and salt and pepper to taste. Cook and stir for 6 to 8 minutes more, until the vegetables are tender. Turn the vegetables into a serving bowl to cool to room temperature.

When the vegetables are cool, remove and discard the garlic. Stir in the chives, half the basil, and the chickpeas. (At this point cover and chill the vegetables a few hours, until needed.)

Put the vegetables in a soup tureen, scatter over the shrimp, and sprinkle over the olives. Pour the chilled soup into the tureen and sprinkle the remaining basil over the top. Serve cold. 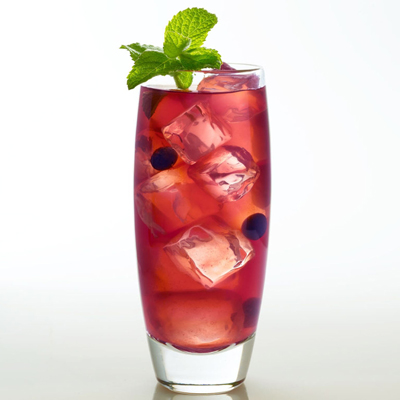