Turn It On Its Head- Upside Down Sweet Potato Gratin 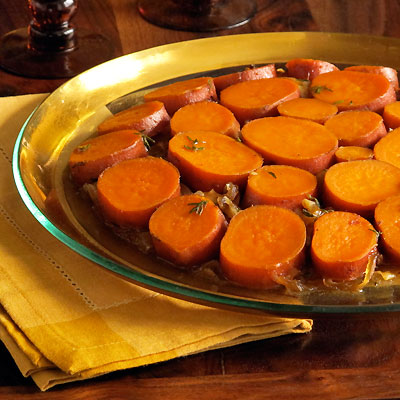 But as I started prepping I decided that a sweet potato gratin might be the direction I wanted to go. I had already boiled and sliced the potatoes. I had already slow cooked some Sweet 100 tomatoes. Caramelized onions were filling the house with their marvelous fragrance.

Was it too late to turn this into a gratin? Well, I didn’t prep a gratin pan. I already had a cake pan lined with parchment and drizzled with maple syrup all ready to go. I even had laid out an attractive layer of potato slices. But still, I stopped what I was doing and ran to the computer. Just what was a gratin, I wondered.

Well, it turns out a gratin is typically a vegetable baked with cheese and topped with crunchy breadcrumbs. Hmmm. Was I past the point of no return in making this into a gratin. Well yes and no. I had big chunks of potato and no plan for cheese. But I had some excellent aged goat cheese in the fridge and who says gratins can’t have chunky potatoes! 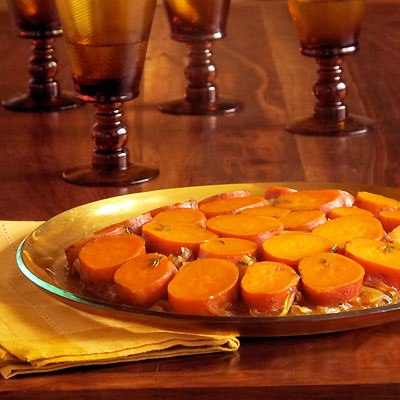 So that’s when this recipe came together in my mind. I grabbed that goat cheese by the horns and layered it on top of the potatoes, followed by the oven-dried tomatoes and my luscious caramelized onions. Hurriedly I popped that baby in the oven.

Half an hour later I could hear it bubbling away in there. It smelled just like my mother’s sweet potatoes. I let out a sigh of contentment, glancing over at my iPad in self-congratulatory bliss. That’s when I saw the Wikipedia definition of gratin again. Yikes. I forgot the breadcrumbs. I mean I will allow for some wiggle room but I will never accept gratin without its buttery crunchy breadcrumb topping.

So I threw open the pantry and fried me up some breadcrumbs in a pan. The obvious choice was to throw them on for the last few minutes of cooking but at this point, I wasn’t in an obvious kind of mood. I was feeling like a rebel! That’s when I got the idea to literally turn this gratin recipe upside down. I would invert this gratin, exposing the artful layer of potatoes in a bold new way. It made perfect sense to hold the breadcrumbs until after inversion. After all, gratins are topped with breadcrumbs. In my version, the bottom would be the top. So the breadcrumbs would just have to wait their turn. I passed them at the table letting people add their own breadcrumbs.

Preheat the oven to 250°F. Halve the tomatoes and place them cut-side up on a baking-sheet. Drizzle over some olive oil and sprinkle with salt and pepper. Place in the oven to dry for 1 hour & 15 minutes to dry. Too much juice will make the gratin difficult to unmold.

Meanwhile, cook the whole potatoes, with their peels in boiling salted water for 15 minutes. They should get a bit soft, but not thoroughly cooked. Drain and let cool. Trim a bit of the pointy ends off each potato, then cut into 3/4‑inch thick rounds.

In a medium sauté pan cook the onion over medium heat with 2 tablespoons oil and a big pinch of salt, stirring often, until lightly caramelized to a golden brown. About 18 minutes. Once you’ve prepared all the vegetables, brush a 9″ cake pan with a bit of oil, then line the bottom with a circle of parchment paper.

Pour the maple syrup into the cake tin and tilt it to spread evenly over the bottom. Scatter half of the thyme leaves on top of the syrup. Lay the potato slices close together, cut-sides down, on the bottom of the tin. Gently press the onion and tomatoes into the gaps and sprinkle generously with salt and pepper. Spread the slices of goat’s cheese evenly on top. At this stage, you can chill the gratin for up to 24 hours.

When ready to bake. Preheat the oven to 400 degrees F. Bake the gratin for 25 minutes, then reduce the temperature to 350 degrees F and continue baking for another 15 minutes, or until the potatoes are thoroughly cooked.

While the gratin bakes prepare the breadcrumbs. In a small skillet set over medium heat, melt the butter. Add the panko and toast, stirring constantly, for about 3 minutes until golden brown and crisp. Remove from the heat and stir in the remaining thyme leaves, and a pinch of salt. Set aside.

When the gratin is finished cooking remove it from the oven and let rest for two minutes and no more. Hold an inverted plate firmly on top of the pan and carefully but briskly turn them over together, then carefully lift off the pan. 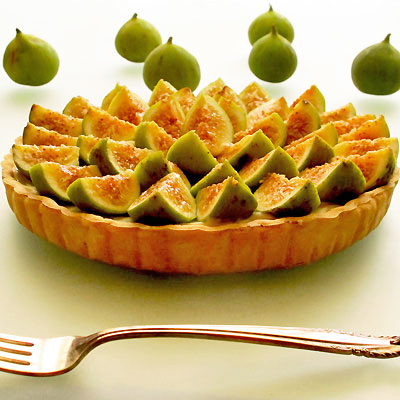 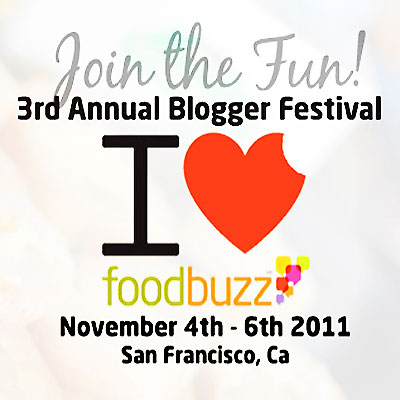 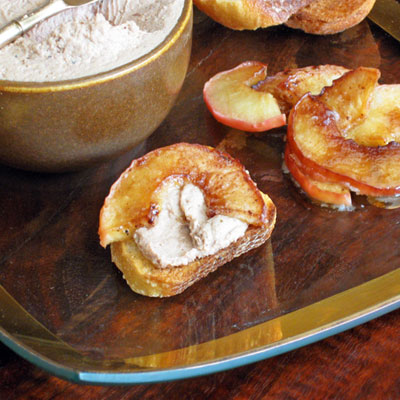