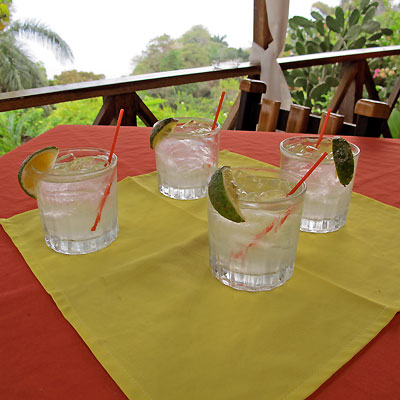 Let’s say you and your special you know who are in Costa Rica staying at a 7,500 sq foot ocean view home called Casa Elsa with two of your closest friends (more on the house and our cooking adventure to come soon).

Naturally you are having the time of your life, so it would be hard to pry yourself away from the house and all its beauty. But let’s say you’re me. The kind of person the dust rarely settles on. When I travel I like to– travel. Which to me means immersing myself in new traditions, new tastes and new cultures.

Well, one of the traditions I remembered most from immersing myself in the culture of Costa Rica on a previous trip was the taste treat known as Bocas. It comes from the Spanish word for mouthfuls, and they are closely aligned with the Spanish concept of Tapas. They usually consist of a variety of traditional foods served in small amounts, from black bean dip, to deep fried chicken wings, perhaps a small amount of ceviche, a small bowl of olla de carne, or fried yuca and pork chunks. It can be simple or creative. Casual or elegant. 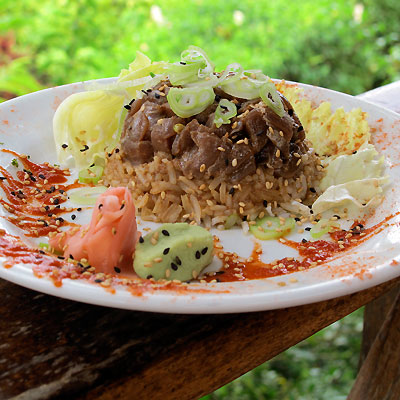 These days, as with so many other things, wider travels and easier communication means more and more Bocas are taking on more and more global influences. Bocas are no longer limited to the traditional foods of Costa Rica. It’s likely some of your favorite flavors will find their way onto a Boca menu. You might be served something with Asian flavors. Perhaps a raw fish dish. Something similar to poke.

In fact the very first plate of Bocas we enjoyed on this trip was called Atun Picante Puki Style. It was raw yellowfin on a bed of Lizano infused rice with soy, wasabi and a bold drizzle of hot sauce. Typically Costa Rican food is quite mild and I enjoyed this bold bite of spiciness, and appreciated the non-traditional direction this Boca plate took. But of course every bar has its own specialties and their own interpretation of the concept. 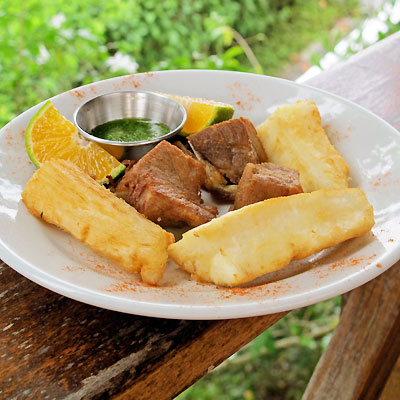 The global influence is both good and bad. Because I can remember 10 years ago or so the Bocas I was served came free of charge, usually during the late afternoon– the time typically referred to as Happy Hour in the US. Some rural bars still provide Bocas for free with your drinks, but most places today charge a reasonable amount for these small plates which are often designed as a smaller version of their entrees to entice you to stay for dinner.

One of these enticements came in the form of a very traditional plate of Chicharrones con Yuca. Fried chunks of stewed pork served with fat “chips” of fried yuca, which is a starchy potato-like root that is very common all over Latin America. It was accompanied by an herbal pesto of some sort which was the highlight of this delicious mouthful. 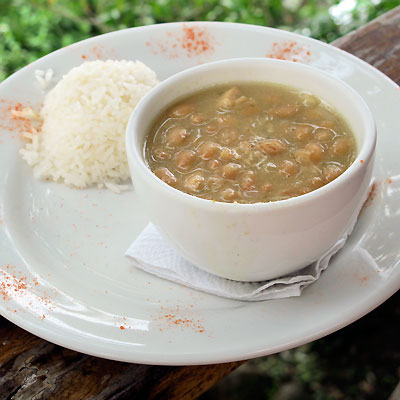 and beans are known as Gallo Pinto and they make an appearance at just about every meal. In fact there were at least three versions of the ubiquitous Tico specialty on the Boca menu we were enjoying. We chose the least traditional, Frijolitos Blanco con Pollo. Which are white beans and shredded chicken stewed with sage and served with rice.

I can’t forget to mention that the main purpose of a Boca menu is to get you to order drinks. So I suggest you learn the phrase “Que tiene natural?”, which basically means “What fruit juice are you serving?” Whatever the answer is it will make a great companion for guaro, the Costa Rican liquor I discussed in a earlier post.  Be brave, order the guaro with that juice. It’s cheaper than any of the imported liquors, and will get you in that Costa Rican groove. Of course we chose guaro, and though I am convinced I was served Fresca with it I am hardly complaining, it was mighty refreshing. 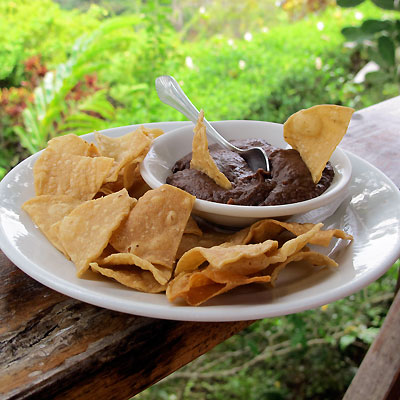 This trip our Bocas adventure was at an ocean-view bar and restaurant in Manuel Antonio on Costa Rica’s Pacific Coast called Cantina Salsipuedes. As soon as we were seated we were brought a plate of flour tortilla chips and a creamy smooth black bean dip, rich with super sweet pork fat. Which put me in the mood to enjoy the view from this restaurant. It is a beautifully situated little place with dead-on ocean sunset views. It appeals to a youngish crowd of local ex-pats (teachers at a school from what I could overhear) and a few of the more adventurous tourists. It has live, low key classical guitar music on some nights, adding to the ambiance. Which makes it a lively, but comfortable spot without all the “reservations please” rigmarole, or hefty menu prices that go along with the more touristy restaurants and high-end resorts you’ll find in the area surrounding Manuel Antonio National Park. 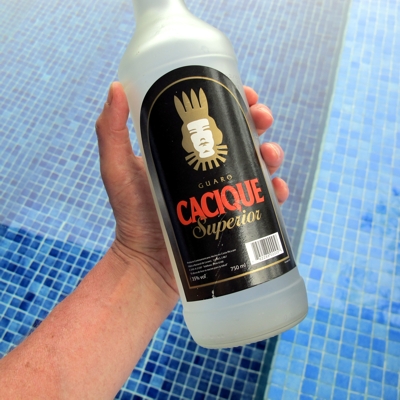 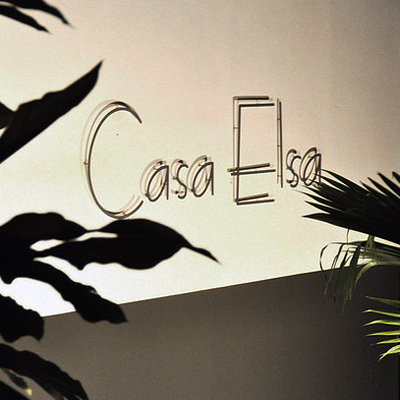 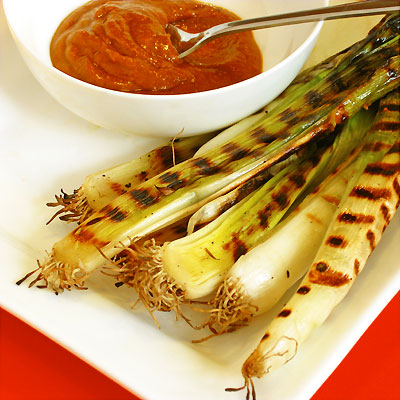