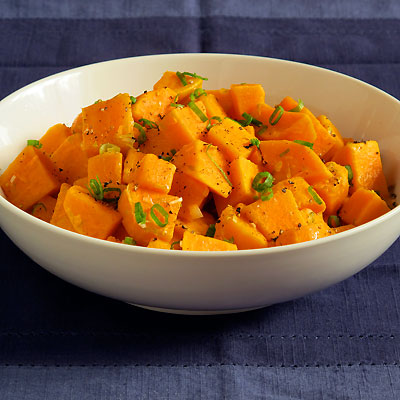 I’m on day five of a week long series dedicated to the summer salad. So far all of my salads have been a bit special. Salads that could work as a main course– or salads that feature a special ingredient. But today I have a salad that is a side dish. Meaning it’s supposed to play second fiddle to whatever else is served on the plate.

Which doesn’t mean it’s not special in it’s own simple (quiet) way. Besides, how can a discussion of summer salads go by without a proper nod to potato salad? Today’s salad fills that void. But it ain’t no plain ole potato salad. It’s a Chilled Sweet Potato Salad with Lime and Chili Oil.

Who says sweet potatoes (or even yams) need to be cold weather food? Not me. Why not shake up your ideas about potato salad. So leave the mayo in the fridge and have a look at what I can do with the humble (sweet) potato. My version is a little sweet, a little sour and even a little spicy. It’s so me. So of course I love it. But as much as I love it I gotta say it’s very second fiddle. Which isn’t a bad thing. Except I just got through cooking with Linda of Salty Seattle, right here in my own kitchen. She was giving me a little lesson in molecular gastronomy (is that the right term?).

We were using chemicals like calcium chloride and sodium alginate to create little bouncy balls of pea and mint. They were pretty damn spectacular, but not at all second fiddle.

So as I sit here pecking away at this keyboard trying to explain how or why my simple potato salad deserves your attention I feel a little like the kid whose bird’s nest show and tell flopped when Johnny SoAndSo brought a moon rock to class. It almost made me feel sorry for my simple little salad.

But you know what? Just look at the color of my salad. It might not bounce and squirt. But man oh man, does it taste good on the plate with grilled chicken on a hot summer’s day.

Bring a large pot of salted water to a boil. Add sweet potatoes, and return to a boil. Reduce heat, and simmer until tender, about 5 minutes. Drain. 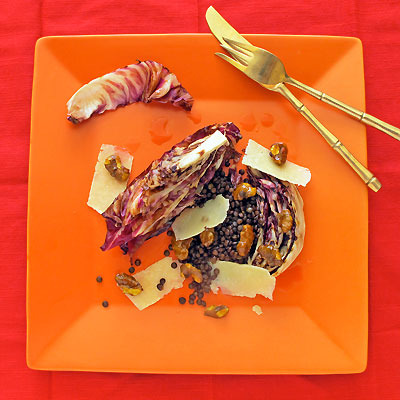 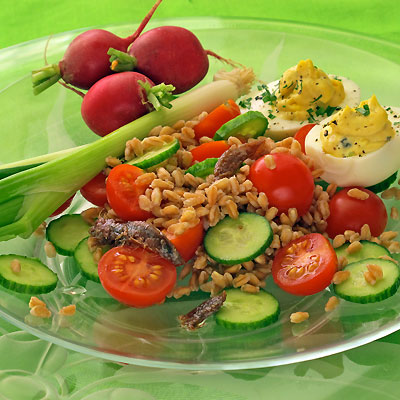