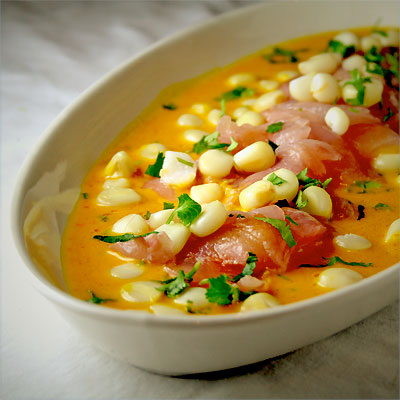 Crudo, ceviche, sashimi, tartare, poke, and tiradito. Different countries, different cultures– but it’s all raw fish to me. And it seems lately that we are swimming in it. So for today’s selection in my weeklong menu of small plates with wine pairings, I am choosing a Sea Bass Crudo raw fish dish. It’s got a bold Latin palate, and my brother Grant has paired it St. Michael-Eppan Riesling Montiggl.

Despite its strongly South American flavors, I am choosing to call my recipe crudo. Which may not be the prettiest sounding name to English speaking ears, but crudo has been music to the tastebuds of Italians for generations. Especially in regions like Puglia and Marche. There, thin slices of raw fish are flavored with whatever ingredients at hand– often in combinations far bolder than you might find at the best sushi bars.

Considered exotic or even downright unpalatable just a few decades ago, raw fish has gone mainstream, and the Japanese led the way here in this country. But most cultures have some presentation or another highlighting the very best the sea has to offer.

My version today takes many of its cues from Peru. There, raw fish is served both as ceviche and in the lesser-known style known as tiradito. Derived from the word tirar, which means, ‘to throw’, tiradito is the Latin cousin to crudo and sashimi. 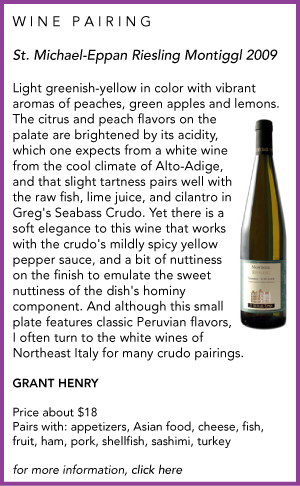 There is a large population of Japanese immigrants in Peru so it’s easy to imagine that this particular preparation may have a Japanese provenance because it seems closer to sashimi than ceviche, which is typically marinated in something quite acidic.

Tiradito is a raw seafood dish that can be executed with a wide variety of fresh catch. It is prepared with thin slices of raw fish and served with a sauce that typically includes lime juice and a local yellow pepper known as aji amarillo. Unlike ceviches, tiraditos don’t typically contain onion.

So in keeping with this cultural mash-up, I am combining the best of the Italian, Japanese and Peruvian in my version. Because these days imaginative chefs are not only embracing raw fish in its many forms, they are also finding cross-cultural inspiration to be an exciting concept. It’s stretched well beyond the familiar Asian-Fusion to include all sorts of styles.

Now, just a few notes on this recipe. I hope the seemingly unusual ingredients won’t discourage you. Because even if you can’t find the traditional yellow Peruvian pepper known as aji amarillo. Many Latin markets carry a prepared aji amarillo paste. It is also available on Amazon. Besides its possible to replace the aji paste with 1/4‑teaspoon cayenne pepper or omit it altogether for a milder version.

Also when I say sea bass I DO NOT MEAN Chilean Sea Bass. We are fast eating that poor creature into extinction. Please choose something sustainable. I chose the Seafood Watch rated “Best Choice” California White Sea Bass. It’s wild-caught in the Pacific and available online at I Love Blue Sea.

Lastly, I found the large grain Andean corn called choclo in the frozen section of a Latin food market in my neighborhood. Hominy or regular sweet corn are good substitutes.

Make the aji paste: Place aji amarillo in a saucepan with water and bring to a boil. Lower heat to a simmer and cook about 5 minutes. Change water and repeat procedure twice more. Remove the aji peppers from the water and let cool slightly. Slip the peels off the peppers, cut, seed, and de-vein them. Blend with the oil until you get a creamy paste. This makes more than you will need.

Make the tiradito sauce: Bring a small saucepan of water to a boil, add the yellow bell pepper and boil 15 minutes. Drain and cool. Slip the skin off the pepper and place the pepper in a food processor. Process until very smooth. Add the about 1 tablespoon aji amarillo puree (or more to increase spiciness), garlic, lemon juice, lime juice and clam juice and pulse just until combined. Pour the sauce onto a serving platter with a lip. Chill until ready to serve.

Prepare sea bass: With a sharp knife, cut along either side of the dark bloodline that runs down the center lateral line of the fillet. Discard the dark flesh. Trim away the thinnest edges and the belly flap, making sure to include the fine pin bones that reside just to the center of the belly meat. Each fillet has now been turned into 2 relatively uniform blocks.

Cut each block into 1/4‑inch slices or thinner slices, and arrange them top of the sauce on the chilled platter.

Using a dropper place one or two drops of soy sauce onto each slice of fish. Garnish with cilantro and choclo. 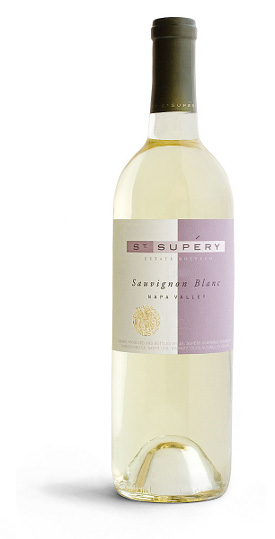 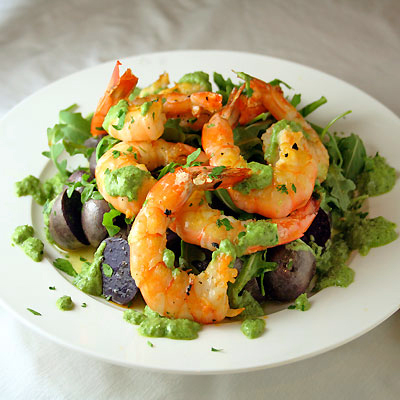