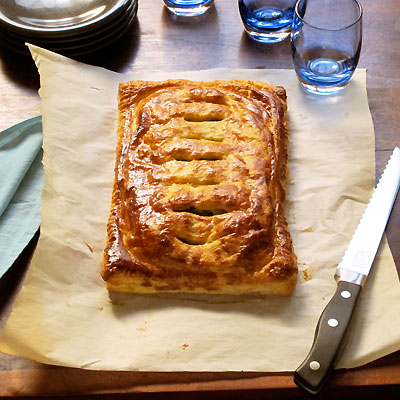 Well I mean– it’s not hers. I didn’t take it off her plate or anything. In fact I made this beauty with my own two hands. What I mean to say is I tore the recipe and photo out of her magazine several years ago. It’s been scrunched up in the back of my desk drawer ever since.

But in a recent bout of autumm cleaning I uncovered and unwrinkled it. I discovered that they very thought of this pie could still make me drool. Even after all these years. So I made her Alsatian Potato Pie. See now why I call it hers?

And you know what? Not only did I make it exactly as she instructed– I even took a photo that looks remarkably like the photo that captured my attention all those years ago. I figure emulation is the greatest form of flattery. And this pie deserves all the warm words you can throw its way.

In fact this savory pie inspired me so completely that I have decided to start one of my weeklong single subject marathons. That’s right the next seven days in a row I will be posting savory pies. Pies in all forms. Tarts, galettes, and even cute little hand-pies. They will all make an appearance. And the thing that binds them together will be the fact not a one of these warm from the oven beauties will be for dessert. Why should you wait til dessert to eat pie? 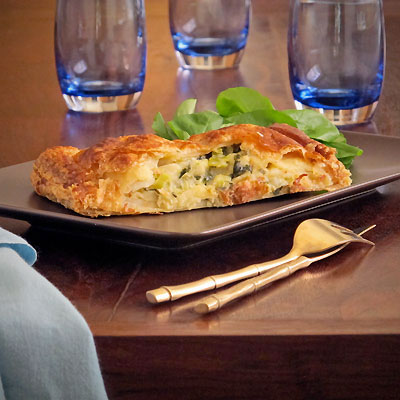 Because pies are comforting combinations of just about anything you can imagine.  Cheese. Meat. Nuts. Even Seafood. They all benefit when wrapped, tucked, or baked inside a delectable crust. Sometimes flaky, sometimes chewy. Crunchy. Crisp. Buttery.

In fact sweet pies are a bit of a modern invention. Because sugar was not readily available in Britain until the late Middle Ages. So, until then, pies were usually filled with meat.

Cooks love pies too. Pies are a perfect vehicle for leftovers. The word pie is said to have come from a bird called a magpie. The magpie was known to jump from here to there and everywhere in between grabbing little unrelated bits of this and that to tuck inside its nest. So pies developed as the perfect vehicle for a little like the magpie’s this and that– whatever the cook has handy and catches his or her attention.

The only rule I have about pies is regarding presentation. Pies should look spectacular. Because the pastry acts as a wrapping that automatically elevates the simplest ingredients. So be they rustic or elegant their visual appeal is what brings people to the table.

So sit right down and have yourself a pretty little savory potato pie. In fact have seven, because I hope to see you back at my table everyday this week. 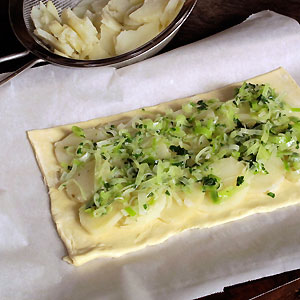 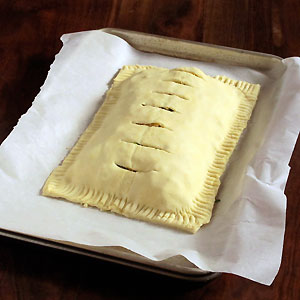 Cover potatoes with water in a medium saucepan. Bring to a boil over high heat. Add a pinch of salt; cook until just tender, 13 to 15 minutes. Drain. Let cool.

Bring 3/4 cup plus 3 tablespoons cream, the garlic, and nutmeg to a boil in a small saucepan over medium-high heat. Cook mixture until reduced by half. Season with salt and pepper; set aside.

Melt butter in a skillet over medium heat. Add leek; cook, stirring occasionally, until softened, about 5 minutes. Remove from heat. Stir in parsley; season with salt and pepper. Set aside.

Preheat oven to 400 degrees. Whisk egg yolk and remaining tablespoon cream in a small bowl; set aside. Divide puff pastry on a lightly floured surface into two 6‑by-13-inch rectangles. Set 1 rectangle on a baking sheet lined with parchment paper. Add half of the potatoes, leaving a 1/2‑inch border all around and overlapping potatoes slightly. Top with half of the leek mixture and 3/4 cup cheese; season with salt and pepper. Repeat layering with remaining potatoes, leeks, and cheese. Brush edges of dough with egg wash. Cover with remaining dough rectangle; gently press edges with a fork to seal. Cut 2‑inch slits lengthwise in center of crust, 2 inches apart. Brush with egg wash. Refrigerate until cold, about 30 minutes. 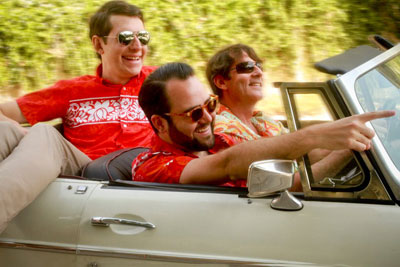 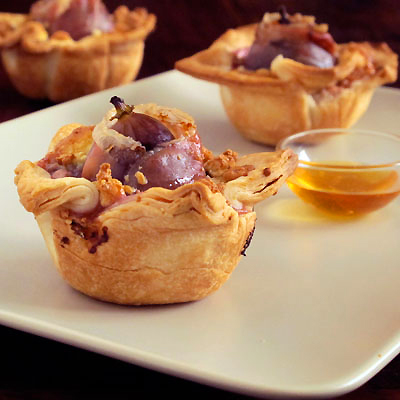 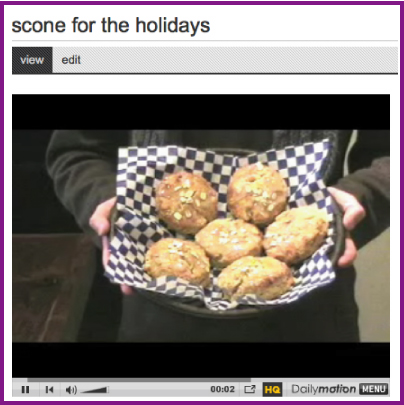