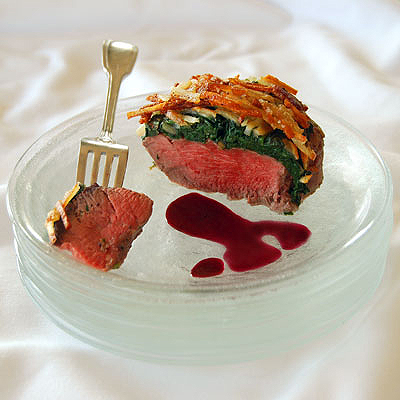 With its potato crust and pomegranate sauce, this is an elegant way to enjoy filet mignon. It may be the most refined version of “meat and potatoes” you will ever serve your guests.

Make the sauce:
Heat all the ingredients in a heavy bottomed sauce pan set over medium heat. When the mixture comes to a low boil, lower the heat and simmer, stirring occasionally, until the liquid reduces to a syrupy consistency, about 1 hour. This recipe makes more sauce than you will need. You may store leftover sauce in an airtight container for up to 2 weeks in the refrigerator.

Prep the filets:
Prehreat oven to 400 degrees F. Wilt the arugula in a scant amount of vegetable oil, season with salt and pepper. Transfer the arugula to a colander, pressing on it to squeeze out as much moisture as possible. Roughly chop and set aside.

Peel the potatoes. Using a mandoline with a julienne blade, slice the potatoes crosswise into 2″ matchsticks. Then very roughly chop them to get a nice variety of sizes from ½” to about 1 ½” long. Bring a medium-sized pot of salted water to a boil. Blanch the potatoes about 20 seconds. Drain them well. Transfer them to a paper towel lined plate and pat dry with more paper towels. You want them as dry as possible.

Lay out a section of plastic wrap on the work surface. Make a circle of potatoes about twice the size of your filets and about 3/4″ thick. Season one of the filets on both sides with more salt and pepper. Be generous. Place the meat onto the center of the potatoes. Top it with half the wilted arugula and another ½” of potatoes.

Then use the plastic wrap to assist you in fully encasing the meat with potatoes by carefully pulling it up and around the meat sealing the plastic wrap tightly on the top. Repeat this process with the other filet and place them in the freezer about 10 minutes before proceeding.

Heat about ¼” vegetable oil in a 10–12″ cast iron or heavy bottomed oven safe skillet. Heat the oil to shimmering and test the temperature with a few stray shards of potato. They should get golden brown in about 1 minute. Adjust temperature if necessary.

Remove the filets from the freezer and carefully unwrap them. Then invert each one onto a large spatula and carefully peel off the plastic wrap. Not all of the potatoes will stick, and that is fine. But you may need to press a few shards into place to assure an even, fairly thick coating. Gently slide the filet into the hot oil. Then immediately repeat the process with the second fillet. Let the filets cook two or three minutes with out moving them. Once the potatoes are golden brown very carefully flip each filet, and transfer the skillet to the preheated oven.

Cook the meat until the interior temperature reads 120 degrees on an instant read thermometer for rare, 125 degrees for medium rare. About 5–7 minutes. Transferring them to a cutting board to rest about 7 minutes. They will continue to cook a bit as they rest.

To serve: Gently reheat the pomegranate sauce. Adding the butter and stirring constantly as it melts. Once it has fully emulsified, cut each fillet in half, taking care to keep the potato crust intact.

Transfer both halves of each fillet to a warmed dinner plates. Spoon a couple of tablespoons onto the plate and serve immediately. 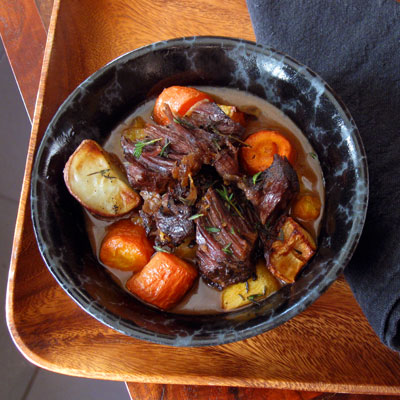 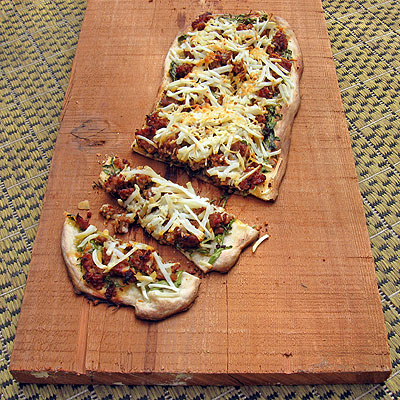