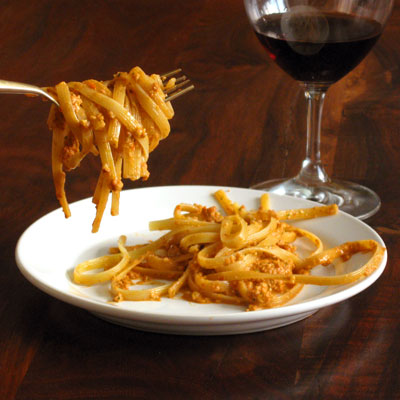 The Italian city of Trapani, on Sicily’s westernmost tip, has an identity all of its own. That is because geographically speaking it is closer both in distance and topography to Tunis than Naples. In fact it’s closer to several African ports than it is to any part of mainland Italy.

It owes much of its heritage to the sea and its importance to the ancient trade routes. Trapani flourished as the center of Phoenician trading because it was a navigationally necessary port during the middle ages. With out Trapani, links between Tunis, Naples, Anjou and Aragon may have been impossible at that time. These facts helped Sicily’s foods to develop separately and distinctly from the rest of Italy. Its hot, dry, predominately flat landscape seems more reminiscent of North Africa than most parts of Italy, and is another determinate factor in its culinary past.

So it’s no wonder that the foods we associate with North Africa have gained a footing in Sicily’s culture.

The most obvious example is couscous. There is a very well known Sicilian dish of coarse-grained couscous. It is steamed and served with a broth of (typically) eel, grouper, cod and scorfano (in French rascasse).

The intense flavors of this broth are quite reminiscent of bouillabaisse, and contains similar ingredients like: tomatoes, garlic, and saffron. Only the Trapanese discard the solids (fish and all) and thicken the remaining liquid with finely chopped fresh almonds. Sup! Is experimenting with his own version at the moment. I hope to bring you this recipe soon. 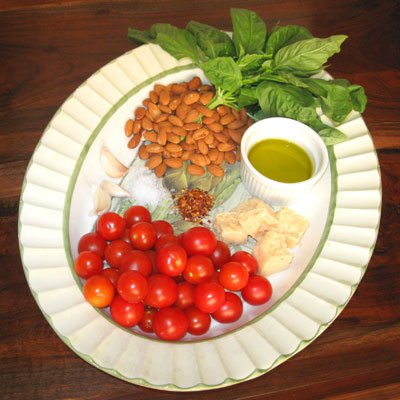 Almonds are a rather frequent visitor to the cooking of Trapani (and Sicily in general). They grow all over the place. It’s not unusual to see almond trees growing in the wild right alongside other trees, like date and citrus. All of which found their way here on ancient trading ships and have established themselves quite nicely.

My favorite of the almond centric recipes is the Trapanese version of pesto. I am sure the Genovese might argue with the term pesto, as this sauce is not green at all. It’s a rustic mix of chopped almonds, garlic, basil and fresh, cherry tomatoes. There is often a bit of heat to the recipe in the form of red-pepper. Like a more traditional pesto this version is pounded together in a mortar and pestle before being tossed with good local pasta.

Trenette is the typical pasta for Pesto Trapanese. It is a fat hand-rolled, square spaghetti. It’s almost impossible to find outside of Sicily. So I had to get creative when choosing a pasta shape for this pesto.

In Los Angeles it is often served with bucatini, which is a chewy hollow spaghetti typically used in casseroles. Most of the Internet versions I have seen substitute regular spaghetti or linguine.

I decided to use a rather untraditional fettuccine rigati. Historically, rigati (tiny ridges on the outside of the pasta) have been mostly reserved for short pasta shapes like penne. Pasta shapes with ridges tend to hold more sauce because of the incremental surface area created by the grooves versus their smooth-shaped counterparts. 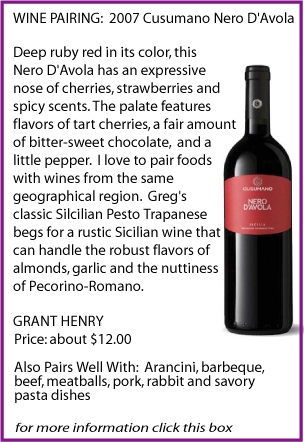 The only brand I have ever seen with this type fettuccine is Barilla. I chose it because of its chewy texture, and with the addition of ridges it seems the closest to the original intention of trenette to me. You can use whatever pasta you like, but I do suggest you limit yourself to the “ribbon” styles.

I also suggest you make and serve yours with a nice sized fistful of grated pecorino or something similar. Again, my research seems to indicate that Parmagiano-Reggiano and Grana Padano are the cheeses of choice for this pesto (at least in America). But I say take your orders from the geography of Italy and use a cheese more likely to be found in the southern villages around Trapani, such as caciocavallo or Pecorino Siciliano. Of course, Pecorino Romano is an easy to find substitute in most countries outside Italy and is the cheese I chose.

I asked Grant to do a wine pairing for us on this one. It was a bit of a challenge for him because I requested a red wine. Grant informed me that there were some very good, very traditional white wines that would work wonderfully well with this dish. I could see that was the direction he preferred to go.

But I was serving this pasta as a main course in a casual dinner. It was preceded by a simply flavored fish course paired with a white wine. The menu was already in place. I couldn’t change it. Besides, I don’t consider it a dinner party unless we have served a red wine!

So despite the difficulties associated with almonds Grant put his thinking cap on and came up with a red wine whose tannins would not clash with those in the almonds! Thanks Sip! 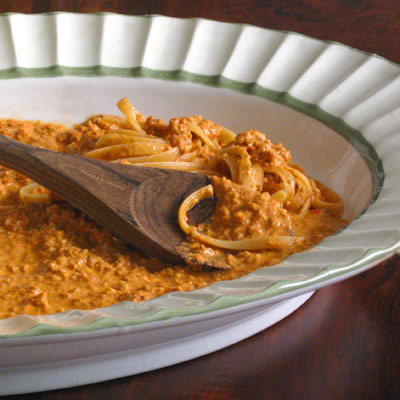 In a food processor, combine 2 tablespoons olive oil, tomatoes, garlic, basil, almonds, and red pepper flakes. Pulse the machine 10 or 12 times. The resulting pesto should be a consistent texture, quite grainy but not too chunky and not too wet.

Scrape the pesto in a serving bowl and stir, adding the remaining olive oil a little at a time. You may not need all of the olive oil depending on your tomatoes. Once the desired consistency is achieved add the grated cheese. Season to taste with salt and pepper. Set the sauce aside so that the flavors will have a chance to meld.

In the meantime, bring 6 quarts water to a rolling boil and add 2 additional tablespoons salt. Add the pasta and cook according to the package direction, until cooked, but still al dente. Drain well. Add the pasta to the pesto filled serving bowl and toss to combine. You may garnish with additional cheese and olive oil after the pasta has been plated. 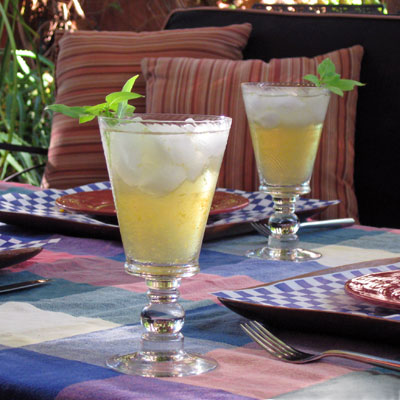