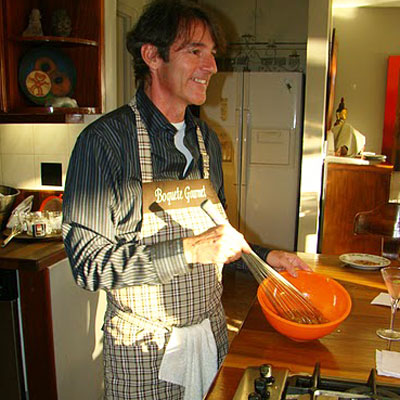 As promised some notes on my Panamanian Cooking Adventure. I am sorry it took me a month to get this to you. But that’s how life is, huh? You always gotta wait for the good stuff!

I was invited by Boquete Gourmet to come to Panama and lead a cooking demonstration. Not one to fear a little adventure– off I traispsed. My concept was to present 6 recipes from classic reastaurants of Hollywood. There is plenty of detail about my choices in previous posts. CLICK here for the original Panama announcement or on the purple links to posts about each recipe.

Panama City is a 5 1/2 hour flight from Los Angeles. We took the red-eye, so I slept on the plane and it seemed we arrived lickity-split (who slipped that Ambien into my cocktail?) to the Panama City Airport! It is big and modern and easy to navigate. We soon got our rental car and before you knew it, we were on the road. It’s a good thing we got an early start because our destination was still a full 8 hours away by car. We were off to Boquete, and it’s way up (over?) at the Costa Rican border. I am sorry I don’t have photos of this part of the trip, but I was a bit nervous about the cooking adventure and was a little lax on my photography, duties. 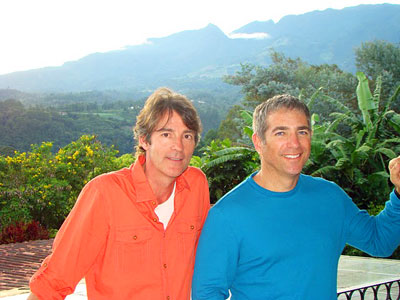 But let me tell you Panama is a pretty place. We stopped at a beautiful little beach on the Pacific coast called Playa Blanca. We had lunch at a beach shack where they served us a great lunch of fried fish, plantains and ceviche. It really was one of the highlights of the trip. I wish I had photos.

Well, we finally arrived at our destination. The drive was long, but quite pleasant as the Panamanian Highway is modern and well-maintained. We had no problems at all. Heck, we did not even get lost. But we were tired, so it was pretty much straight to bed for us as soon as we arrived at our host’s house. They set us up in two wonderful casitas on their property. If you ever want to stay in Paradise I suggest you consider Boquete and a stay with our hosts Cora and David. They rent these casitas out and you could not ask for nicer accomadations. CLICK here for information of Boquete Casitas Rentals.

The next day we were unprepared for the beauty of Boquete. We woke up and went out onto the balcony where laid out before us was a beautiful valley and a soaring volcano. You could see coffee plantations dotting the hillsides (I have a post planned all about the coffee industry in Panama coming soon). The weather was perfect. I guess it is perfect weather nearly every day of the year. Though expect rain (even in the dry season) because of the elevation–  and well, it’s not called a rain forest for nothin’.

In the days leading up to the cooking adventure. We hiked, we sat on the balcony watching the colorful birds and we ate in local restaurants. We enjoyed the town of Boquete a we went for a dip in volcanic hot springs followed by a swim in the (cold, cold) river! Robert even rode a water buffalo… don’t ask. It was on his “bucket list”! 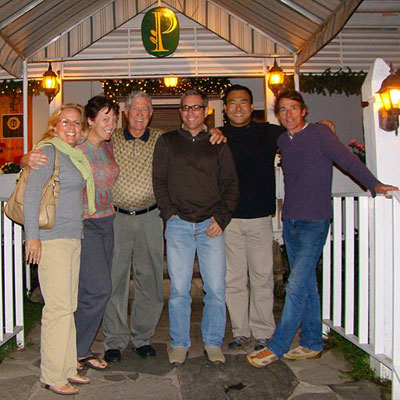 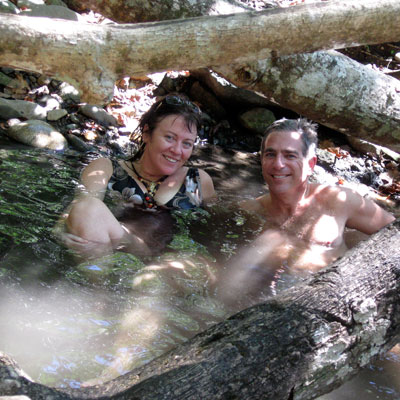 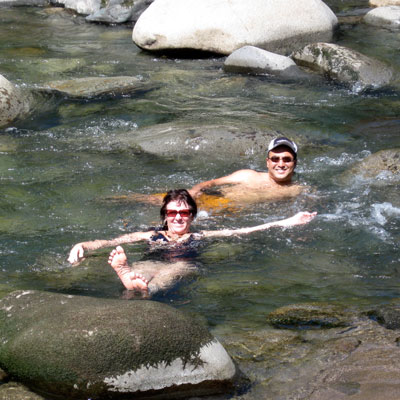 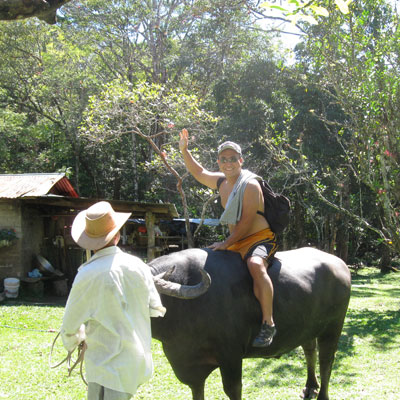 But of course the main purpose of the trip was cooking. Cooking for a delightful group of ex-pats who have figured out that they can live in Eden and still eat like royalty. I was there to help them follow that path. My friend Liz, who is a terrific cook, came along for the adventure and she and I got everything ready for the class. As the guests started arriving we passed around the first item we had prepared for the evening. Of course it was a cocktail. The Signature Cocktail from the Cocoanut Grove. We had to shake up quite a few of these pink libations because the event was a sell-out! Yes, people paid actual money… don’t look so shocked. I can still pack a house when I need to! 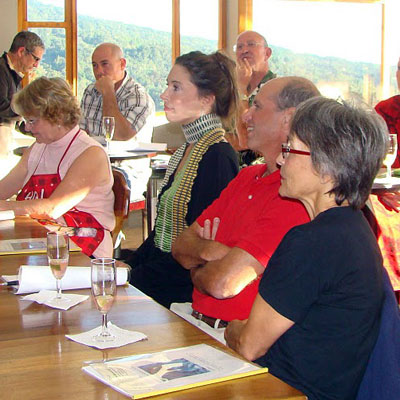 I have to admit I was so surprised how serious the class was too! People were taking notes… people were listening to me. People were assuming I had all the answers to their questions. I sorta liked it! Maybe teaching is a calling of mine. Nah…

Because despite the seriousness of the class. I had something else in mind. I wanted this class to have more of a party atmosphere. Because let’s face it, the recipes I chose to demonstrate were all very easy. I chose them for their history and their significance to the evolution of the “Hot Spot”! I liked them for their connection to the legendary haunts of Hollywood

So I tried to include plenty of conversation and lots of story telling in my demonstration, including a few stories of my own experience of working in show biz. 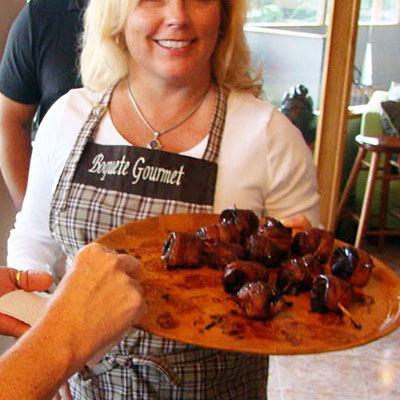 The first plate up was Rumaki. There is an entertaining little history regarding Rumaki’s attachment to Don The Beachcomber, which you can read here. I shared that story and Liz passed the Rumaki around. Well if you don’t know it, rumaki is chicken liver. Bacon wrapped chicken liver! I half expected to hear a few groans or twitters of fear. People can be so funny about food. But, nope! Not this group. After all, they are a group of (mostly) Americans with enough of the sense of adventure, enough heart and enough chutzpah to move to another country and party like it’s 1999. No Nervous Nellies here.

Now I always say to each his own. But to my way of thinking there in nothing to fear in saturated fats. Saturated fats are your friend when incorporated sensibly into a diverse diet. It’s those poly-unsaturated buggers you gotta watch out for. You know the trans-fats. But I digress. Let’s just say I was pleased to be surrounded by a group of sensible eaters, whose mantra was:  “One or two Rumaki ain’t gonna kill ya, so let’s just have a third!” That’s my kind of party…

But when I talk about balance and common sense in a diet I most certainly would include the next item. Plantains with Caviar and Black Beans  from Trumps. This is a wonderful little recipe and I thought the plantains were a nice way to use a very common local ingredient in a sophisticated way. As I learned fried plantains are called patacones in Panama. They are serious about the moniker so don’t make the mistake of calling them plantains until you get home!

I set my patacones up as a “help yourself” station. There were the fried patacones all laid out and several nice topping including a spicy bean puree and some beautifyl black and red caviar. It was my favorite recipe of the evening. 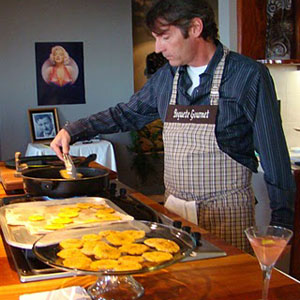 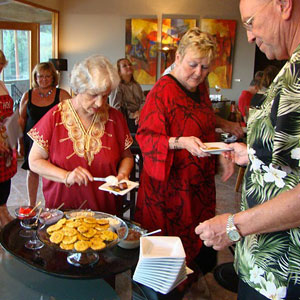 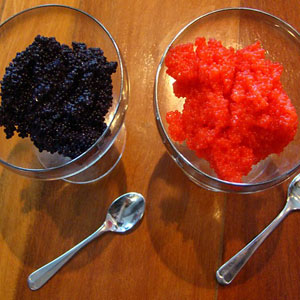 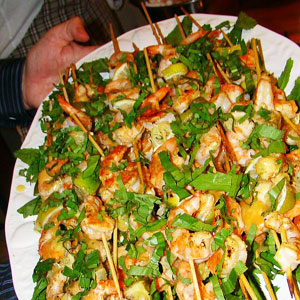 What’s a discussion of iconic Hollywood restaurants with out including Wolfgang Puck and a nod to the old Spago. I chose a barbecued shrimp dish to represent the flavors and tastes that seemed so new when Spago was young. The details of old Spago versuses new as well as a recipe link may be read here. My recipe included ginger. Which turned out to be the one semi-faux-pas of the evening. When Liz and I were prepping for the party we both noted how odd the ginger looked. I smelled it and sure enough it smelled like ginger. So I followed the recipe and added the specified amount of minced ginger to the marinade. I even tasted the marinade. I was not born yesterday you know. All seemed well.

However, in the hour and half or so that the shrimp sat in the marinade something happened. That ginger must be damn strong ginger, because I added the appropriate amount; same as I did in my practice run in Los Angeles. But something was differentâ€“ this ginger was so strong it caused the marinade to become VERY bitter! Sadly I did not discover this until after I grilled the shrimp. I am not in the habit of tasting the marinade that raw shrimp has been sitting in. I am not saying the shrimp were a disaster, but I noted a strongly bitter ginger note that I found slightly unpleasant. Oh well, live and learn. Besides those skewers were so darn pretty nobody complained. 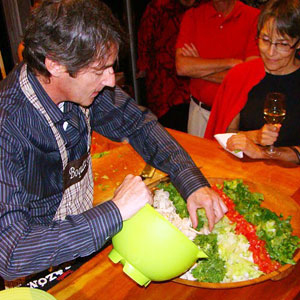 I decided to do an Original Cobb Salad as the main course. It’s a hearty salad filled with chicken, avocado, bacon and egg. More than enough for a meal. Again I shared a bit of it’s history. It is “original” to the famed restaurant the Brown Derby and all the detail may be read by CLICKING here.

By now I had the feeling things were going well. Our hosts moved us all downstairs to the pool house where there were tables and more than enough seating for us all! There was also a small kitchen attached to the bar. Everything I needed to assemble my salad and tell its torrid tale. The party atmosphere I had hoped for was  in full swing now. In fact my students who had all been hanging on my every word now had lots of words of their own; usually puctuated by loud laughter. In my mind that’s the sound of dinner party success! So I made the salad and pulled up a plateâ€“ seating myself down at one of the tables where I finally got to chat some one-on-one with the 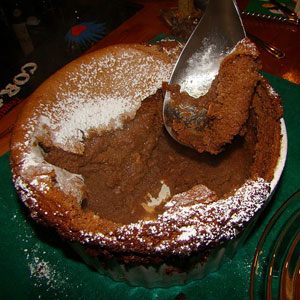 people at my table. Of course they were an interesting group. Look at the life they lead. I enjoyed my meal and the conversation.

Because now my part was over! Liz was up. Liz was to make the Chocolate SoufflÃ© whose recipe came from the classic Hollywood restaurant Romanoff’s. Now Liz is a pro at this and she did not disappoint, because this is the first soufflÃ©I have ever seen to rise to the point of almost too high for the pan! It’s those super fresh Panamanian eggs. Such a treat to cook with!

Of course none of these treats would have been possible with out the hospitality of our hosts Cora and David of Boquete Gourmet. When they first suggested that I do this I was a little verklempt. But not for long because I knew this had adventure written all over it. So while they “were talking amongst themselves”, I pulled myself together and accepted! I am so glad I did too because now, in this great big internet foodie world, I got good people at my back everywhere I look. Even in Panama… 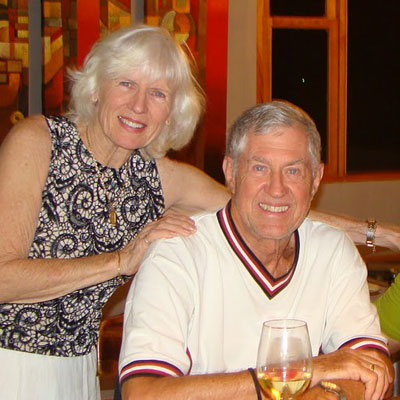 So here’s to Cora and David. May we all be so lucky in life, lucky in love and and lucky to know good eats when we see ’em… Thank you it was an experience of a lifetime. 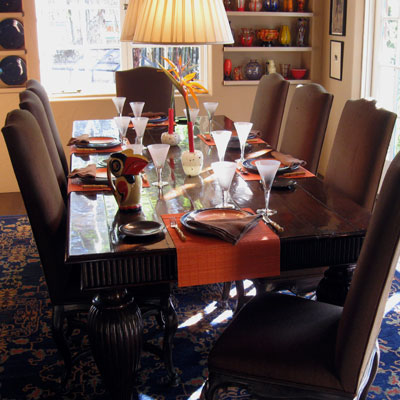