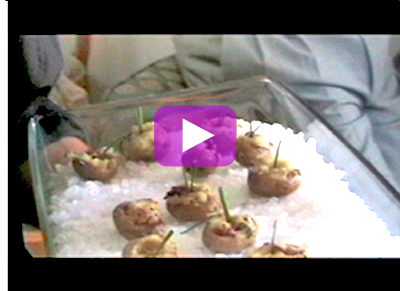 Since it is February, and I am doing re-runs. I thought it was a good time to remember my mother. She was born, got married, conceived me, and even passed away in the month of February.

The 1970’s were when my own awareness of food began to develop. My mother was a fantastic cook. She probably learned most of her skills during this same period and I’d bet that Julia Child, Simone Beck, and the whole “Mastering the Art of French Cooking” craze were her primary sources of inspiration.

While other kids were scarfing down “Tuna Twist”, “Mug-O-Lunch” and “Shake-A-Puddin”, my mom was serving us Bouillabaisse, Duck a la Orange, Mousse de Foies de Volaille. She even taught my little brother and me how to make perfect little crepes so that she could have 2 or 3 pans going at once for her famous dinner parties!

I recall bringing celeriac roumalade to school in my lunch box. I knew the difference between a béarnaise and a hollandaise. We did not eat meat cooked beyond medium rare (even pork). Ever! So in many ways, you see, these are my comfort foods.

But my mother could also be a bit of a Pop-Princess. She Dressed like Mary Richards (she and Mary had the same figure). She rocked to the Eagles, Elton John and Queen. To my pre-pubescent horror, my mother wore bikinis (other mothers did not wear bikinis)!

She was “with-it” in other ways too, even when it came to food. High trends (sake, sushi, fondue, Cuisinart!) and even low trends (Jell‑O salad, smiley face cookies, crunchy tacos, the Joe Namath popcorn popper) none escaped my mother’s attention and curiosity. Hence we kids were exposed to all of this as well. Yes, even sake!

So, needless to say, the popularity of that big, cheesy, bacon filled, 1/2 pound, twice baked, piping hot, crunchy topped, Idaho potato was not missed at the Henry house. In fact, it became a staple.

I remember my mother saying that they were a lot of work. She said it like it was a chore far exceeding her talents in the kitchen. But we knew better, ‘cause she always said it with a twinkle in her eye. And like so many cooks before her, be it a cheese soufflé or grilled cheese with tomato soup, ultimately my mother cooked to please people. So it was that the Cheddar Cheese, Sour Cream, Twice Baked Potato became that culinary specialty always requested by all three of my mother’s children when she asked: “…and what would you like for your Birthday dinner?”.

I actually tear up thinking about it now, because sadly my mother passed away far too young in 1993. But that damn potato lives on in my mind and in my heart.

Over the years I’ve hipped it up some. I have taken my mothers recipe and made it fit into my life, how I eat and how I entertain!  It didn’t take a genius to figure it out either. I instinctively knew how to make it lighter, more sophisticated and even a bit of fun. But I never, ever let it lose sight of its roots.  Something so right can be tweaked, but it cannot stray too far from its soul! Just like the son who remembers his mother and her kitchen in 1970’s

Julia Child once said, “I was 32 when I started cooking; up until then I just ate.” My mother turned 32 in 1972, we moved to Farmington Hills, MI about the same time. My mother got a big suburban-style version of a French kitchen. We had bentwood bistro chairs in apple green; there was a Parisian Boulangerie print paper on the walls. There was even a wood-burning oven (on top of state of the art gas and electric appliances in a deep coppery brown).

I don’t know when Julia turned 32, or even when she may have made that particular comment I mentioned earlier. But in my mind, it will forever tie my mother and Julia Child together in a way that makes me both proud and grateful. GREG