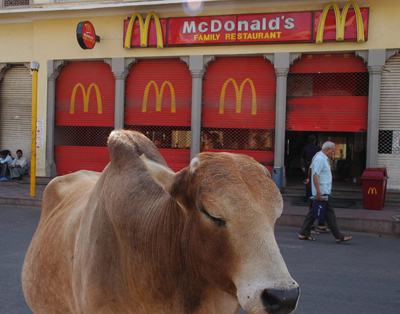 Here is the first of the winning entries for my Jamie Oliver “What’s Cooking?” Contest made possible by Cookstr.

It is entitled Home Made Burgers and it comes from Priya at Food and Laughter. She lives and blogs from India. She is a “working mom, juggling a career with three young kids, an adorable husband, a house and a garden…”

I can’t vouch for her husband, but from what I have read she is totally adorable her own self. So I guess it makes sense she’d have an adorable husband and 3 adorable kids.

Originally, I liked this entry because I loved the universal theme of kids and, McDonalds and birthdays. I don’t even have kids and I can relate to this tale.

She may be blogging from India, but her sweet story, of a mother’s love, could happen in any one of many tens-of-thousands of cities across the globe. Because it illustrates, in the simplest way, how alike we humans are. Race, Gender, Creed, Nationality, Religion, Sexuality…the DNA ain’t that different!

Still, it’s easy to get caught up in cultural idiosyncrasies. And certainly there are cultural differences. But they too often get in the way of our perceptions of one another.

I loved Priya’s story because it got past all that.  Ultimately it is a purely lucid, genuinely felt story about a mom and a son and a special day. Oh yeah, and they happen to live in India.

But the cultural aspects are an interesting aside in this story too. And this is what put her entry over the top and into the winner’s circle for me. I have a feeling there are some tangible and exciting “cultural differences” between their McDs and ours. I mean McAloo Tikki Burger, what’s that?

Like all kids these days, my son loves burgers at McDonalds. In fact, the first logo he ever recognized was the McD one.

We were taking him to his pediatrician for a checkup and as we drove past Basant Lok Market, a large M in the characteristic font appeared atop one of the buildings. His head swiveled around in interest and he lisped in his 2 year old baby voice, “Mamma, I’m yoving it!” Ever since, one of the joys of his life has been the rare outing to a McDonalds outlet for a McAloo Tikki Burger, fries and fruit juice.

There had been a time when the toy that came with the Happy Meal attracted him more than the meal itself, but since then he’s down to appreciating the food. In fact, that was one of the few meals we could count on him wolfing down without any trouble or need to resort to threats/bribes.

He’s lately been invited out to quite a few play-dates at friend’s homes and we’ve been unable to reciprocate until lately, what with the house renovation, my travel and of course, the baby. 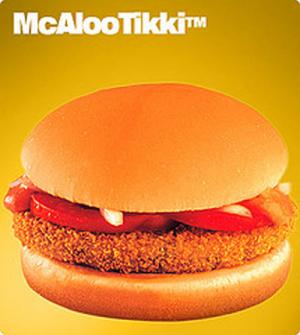 So when we finally called some of his friends over, lunch for them had to be a production number. He wanted to impress them by ordering a meal in from McDs, but I figured by the time the meal got here it’d taste like cardboard so I offered him home made Mc Aloo Tikkis instead.

I have to admit, they’re among my favourite things to eat at McDs. Delicious, unlike soy burgers, and I totally indulged in them during pregnancy.

But now I had a challenge on my hands, because the homemade version had to taste authentically McDs. I must say, I never envisaged the day that I’d be trying to emulate a mass-produced fast food item in my kitchen, but here I was, flipping burgers like a pro!

The boys loved these and the frozen fries we had freshly fried (that sounds like something out of Dr Seuss’s Oh Say Can You Say, Doesn’t it?) and had a gala time at the play-date.

They turned out so well A was asking for seconds, so I’m planning to make them a monthly treat.

1. Boil the potatoes in salt water, peel them and mash them until pasty.
2. Boil the peas. Add the peas, the chopped onions and salt to the potatoes and shape into circles that just fit into the palm of your hand. Roll them in the breadcrumbs. Flatten them into 1‑inch thick disks.
3. In a frying pan, add the oil. When hot, shallow fry the potato burgers until lightly browned on all sides. Spoon up the oil onto the sides of the burgers while frying so the sides get nice and crisp too.
4. In another frying pan, add a knob of butter and lightly toast the cut sides of the burger buns until browned and crisp.
5. Assemble the burgers by applying a layer of the Fun Foods spread on the cut side of the bottom half of the burger bun. Top with a lettuce leaf, add tomato slices until the bun is covered, then add the potato burger.
6. Top the potato burger with another lettuce leaf and the onion slices. Slather the cut side of the top half of the burger bun with more Fun Foods spread and cover your burger. Add cheese slices wherever you want. Serve hot, with ketchup on the side.