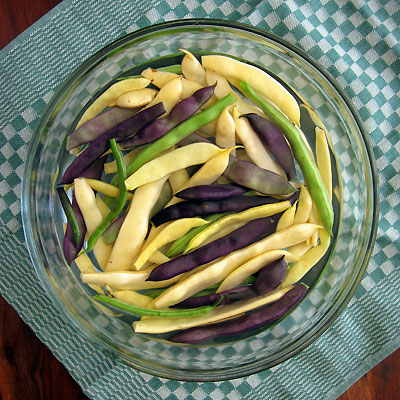 My Market Matters post is going to go a slightly different way.

Today I have a colorful selection of beans. Green beans as well as yellow and purple wax beans. But these beautiful beans don’t come from the Hollywood Farmers Market right down the hill from me. They come from a Farmers Market in Minnesota. Sartell, MN.

Now I am not on vacation and I haven’t moved. You see I did not go to the beans, the beans came to me!

All this came to be because of a certain blogger in Norway, a transplanted Minnesotan. We bloggers certainly do get around, don’t we? You see Siri from The Transplanted Baker likes to arrange market exchanges. This is the second year I have participated and it is a lot of fun.

The concept is simple. Siri matches people up from all over the world. Then these people choose a few items from their local markets and send them to each other. 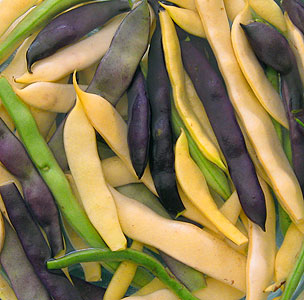 I was paired up with a generous woman named Neysa. Now I have never been to Minnesota. I imagine there are many lakes, I imagine a lot of the people are blond and pretty and athletic, I imagine it gets kinda cold. So (other than the ‘blond are pretty and athletic’ part) I imagine Minnesota is nothing like the Los Angeles where I live. So I decided to give Neysa a sneak peek, agriculturally speaking, to what life is like in this great city. For my half of the exchange, I choose a few items very typical in Mexican cooking. Because here in Los Angeles the Mexican culture is a part of the exciting thread that makes living here so wonderful. It just made sense to me to send an assortment of Latin-inspired produce which might not be readily available at her market.

I included garlic, red hot peppers, tomatillos and a less familiar avocado known as the Bacon Avocado, as well as a few other items along those lines. I heard she made roasted tomatillo salsa and some guacamole, so I see she got my drift. I hope she enjoyed it.

When my box came it was chock-full of “Midwestern Specialties” as Neysa described them. There were some beautiful potatoes (with the dirt still on them), dried mushrooms, handmade soap, maple syrup, Minnesota long grain wild rice and the collection of brightly colored beans I mentioned.

I have enjoyed wax beans from my market before. In fact, I did roasted wax beans with mint recipe here just a few weeks ago. But I had never seen their bright purple cousin before so I was very excited to get cookin’.

I decided to feature Neysa’s beans in this week’s Market Matters. I choose to serve them in a simple salad with heirloom tomatoes. Afterall it is summer. And because it is summer I also decided to grill. In this case lamb chops. It may not be the most innovative recipe I have ever presented here, but I think it shows these beautiful beans off nicely, and it was another easy excuse to eat dinner outside.

But to show I still have a few neurons firing in this old brain I unexpectedly topped the salad and the lamb with a sweet and sour warm bacon vinaigrette. You know the kind usually associated with spinach salads… Sure it’s a bit retro, but I think it sets off the flavors in this dish quite well. Because the whole combination was really delicious, especially those beautiful Minnesota Wax Beans. I just have one question. Once cooked the purple beans turned green! Does anyone know why?

Make the chops: Heat the grill to medium heat. Sprinkle chops with salt and the lightly crushed peppercorns, and grill until barely cooked through, 3 to 4 minutes per side. Serve warm or at room temperature with the green beans and tomatoes.

Preheat the oven to 375 degrees F. Spread the pine nuts in a shallow pan and toast in the oven about 10 minutes, until golden.

In a large pan of salted water, cook the beans, stirring once, until just tender. About 4 minutes. Drain immediately and run under cool water to stop the cooking. Drain and dry the beans arranging them on a serving platter. Place the tomato wedges around the edges, and top this arrangement with the lamb chops.

Meanwhile in a small skillet, cook the bacon over low heat until crisp and golden, about 10 minutes. Pour off all but about 2 tablespoons of the fat and add the oil to the skillet. Stir in the vinegar, sugar, and a big pinch of salt and pepper, Stir to incorporate well. Pour the mixture on top of the lamb and beans. Garnish with pine nuts and serve while the Vinaigrette is still warm. 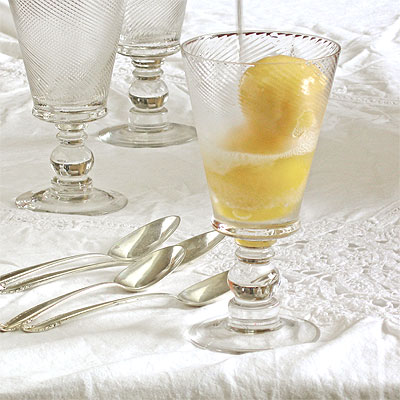