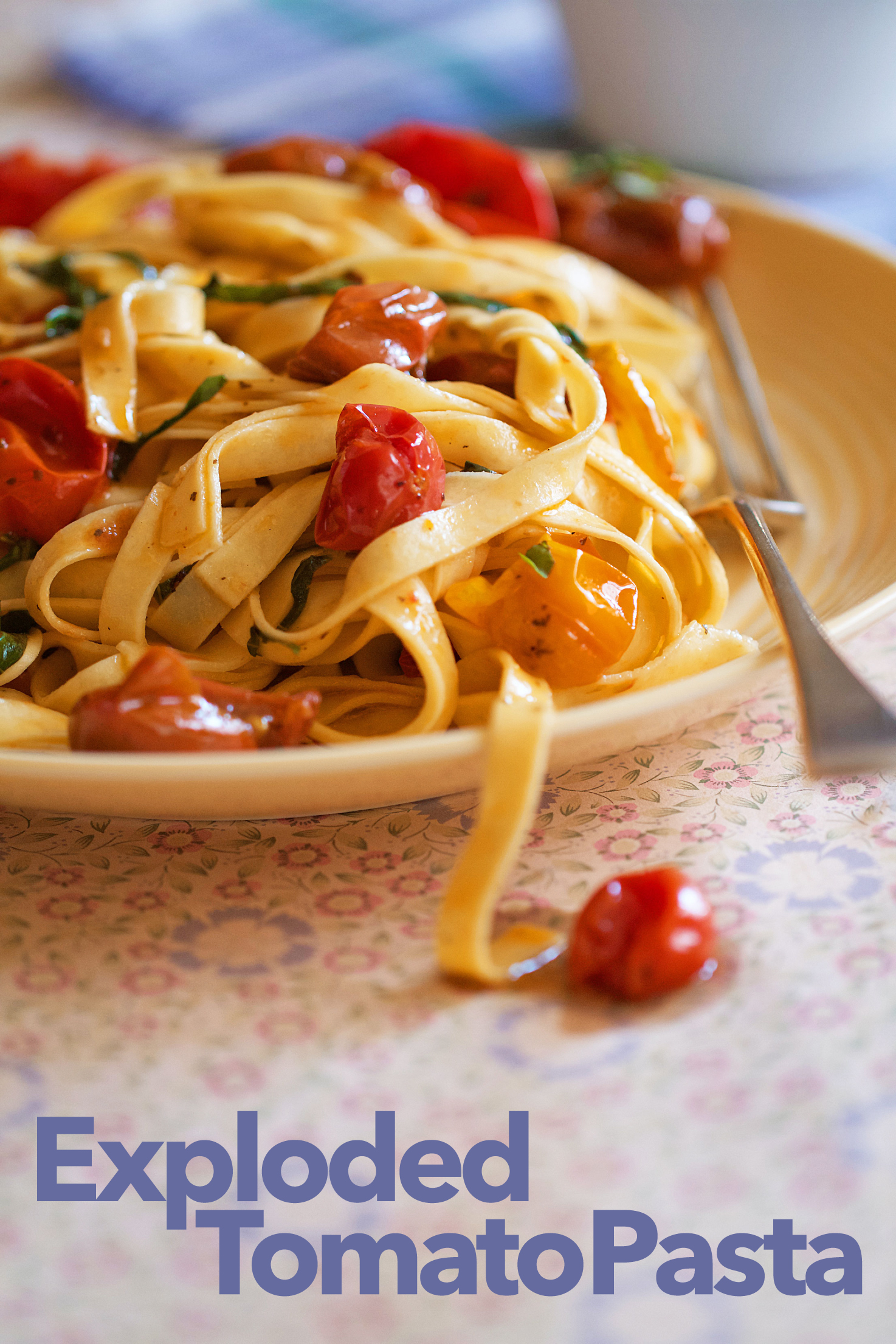 Maybe this is just an L.A. thing, but here it is November and we’ve still got cherry tomatoes hanging around. I see them at the market and I spy them through the backyard fences of my neighbors. Their gardens may be spent and drab but there always seems to be a cherry or grape tomato vine flourishing along a warm, sunny wall even as our nights get chilly. The same goes for the farmers market. Most of the showy summer tomatoes have been devoured, but diminutive cherries still beckon in an array of colors. I’m bringing a panful of these survivors to their bursting point by scorching them with garlic, herbs, and enough good olive oil to make an unctuous sauce. The combination pairs perfectly with a simple plate of fresh fettuccine. It’s what the Italians would call Pomodori Scoppiati, exploded tomatoes.

Tomatoes. Of all the seasonal produce we look forward to each year none inspires the same cultish devotion as summer tomatoes. It seems like just yesterday I was pushing my way to the front of the stalls at the Hollywood Farmers Market to get my giddy hands on the first of the good summer tomatoes. Inevitably I’d bring home more than we could eat, but still, I enjoyed having the multi-shaped, multi-colored beauties litter the windowsill. Then, as summer rolled along I began to tire of feeding the fruit flies $4 tomatoes. About this time I also began to notice that the tables at my favorite vendor’s booths seemed to sway under the weight of so many boxes of ripe fruit that they began to smell almost boozy in their overripe abundance. So I turned my attention to other delights forgetting how fleeting summer tomatoes can be. Now its November and I miss the August and September tomato’s dizzying profusion. Fortunately, there’s still a dwindling selection of grape and cherry-sized tomatoes available and I’m determined not to make the same mistake twice. Which means I consider this the height of Pomodori Scoppiati (exploded cherry tomato) season.

Pomodori Scoppiati. This isn’t necessarily a recipe – it’s more of an idea. Start with a heavy skillet, some oil, and garlic. Add the cherry tomatoes and watch them burst – releasing the juice which mixes with the olive oil to create a rich, silky sauce. This preparation is from Puglia where Pomodori Scoppiati is usually served as a condimento (relish-like side dish) alongside meat or fish or as a building block for other dishes. However, I like Pomodori Scoppiati tossed with pasta. Spaghetti is traditional, but I prefer to twirl thick ribbons of silky fresh fettuccine around my fork – catching the sauce in a most satisfying mouthful. GREG 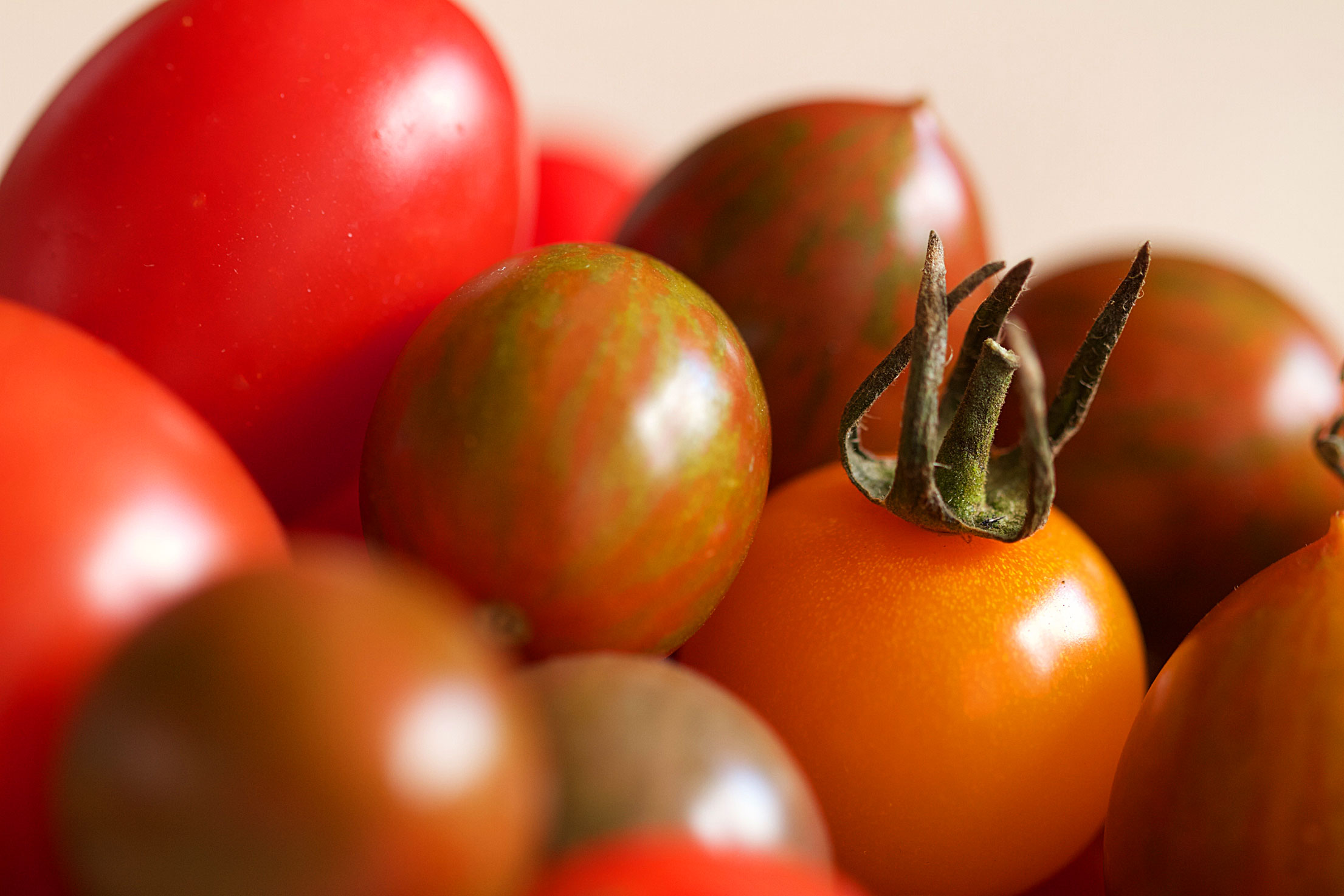 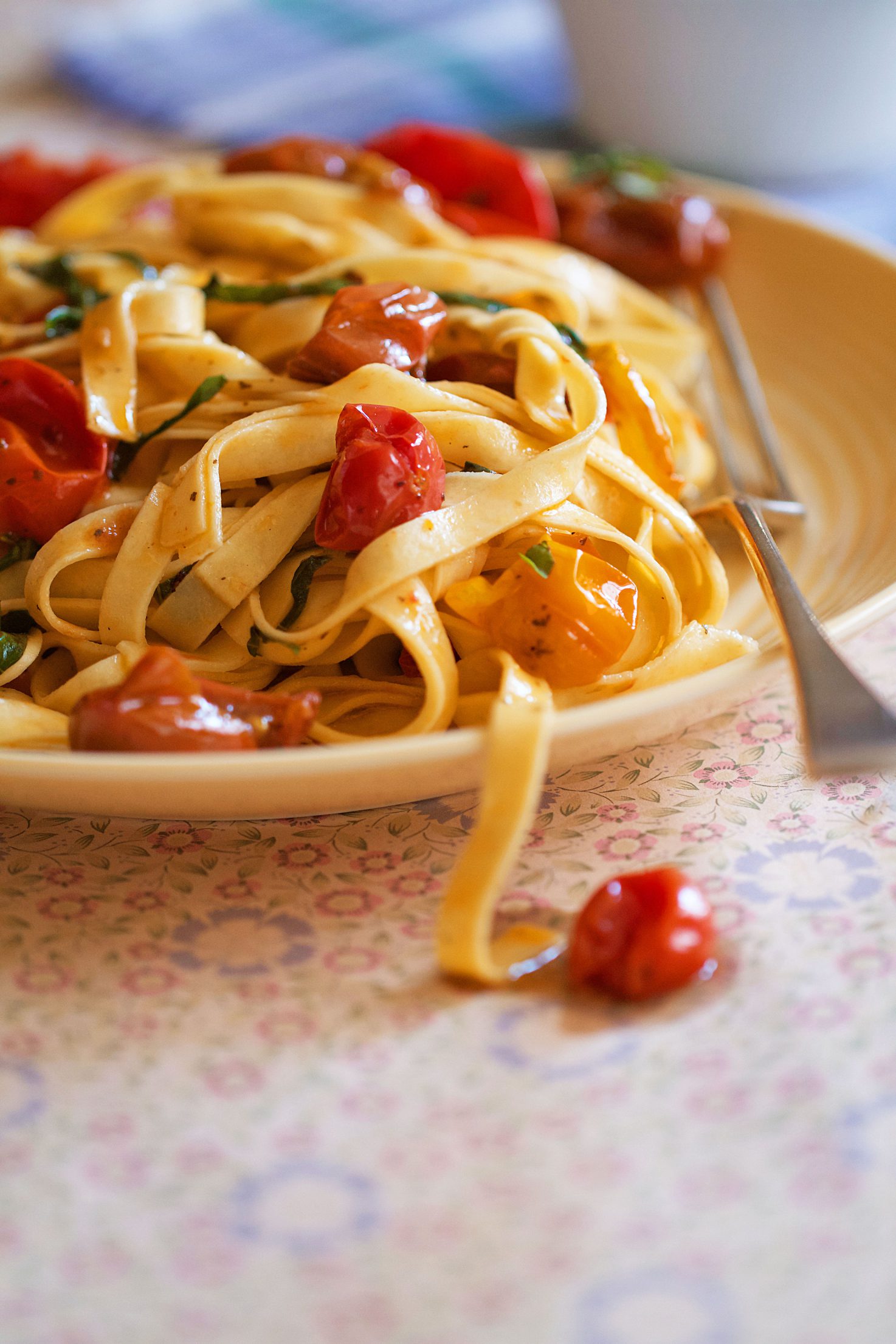 Remove stems from the tomatoes and wash and dry them. Peel and gently crush the garlic with the back of a knife so the cloves break but remain intact.

Select an ample, heavy-bottomed skillet with a tight-fitting lid. Warm the olive oil and garlic in the skillet over medium-low heat then cook gently so the garlic infuses the oil, sizzles, but doesn’t brown. Remove the garlic.

Add the tomatoes, salt, oregano and crushed red pepper flakes (if using) and stir until well coated. Increase the heat to medium. Cover and cook for 10 minutes, shaking the pan every now and then until most of the tomatoes have “exploded” and released some of their juice. Feel free to use the back of a wooden spoon to squash them a bit if necessary. Stir in the basil, if using. 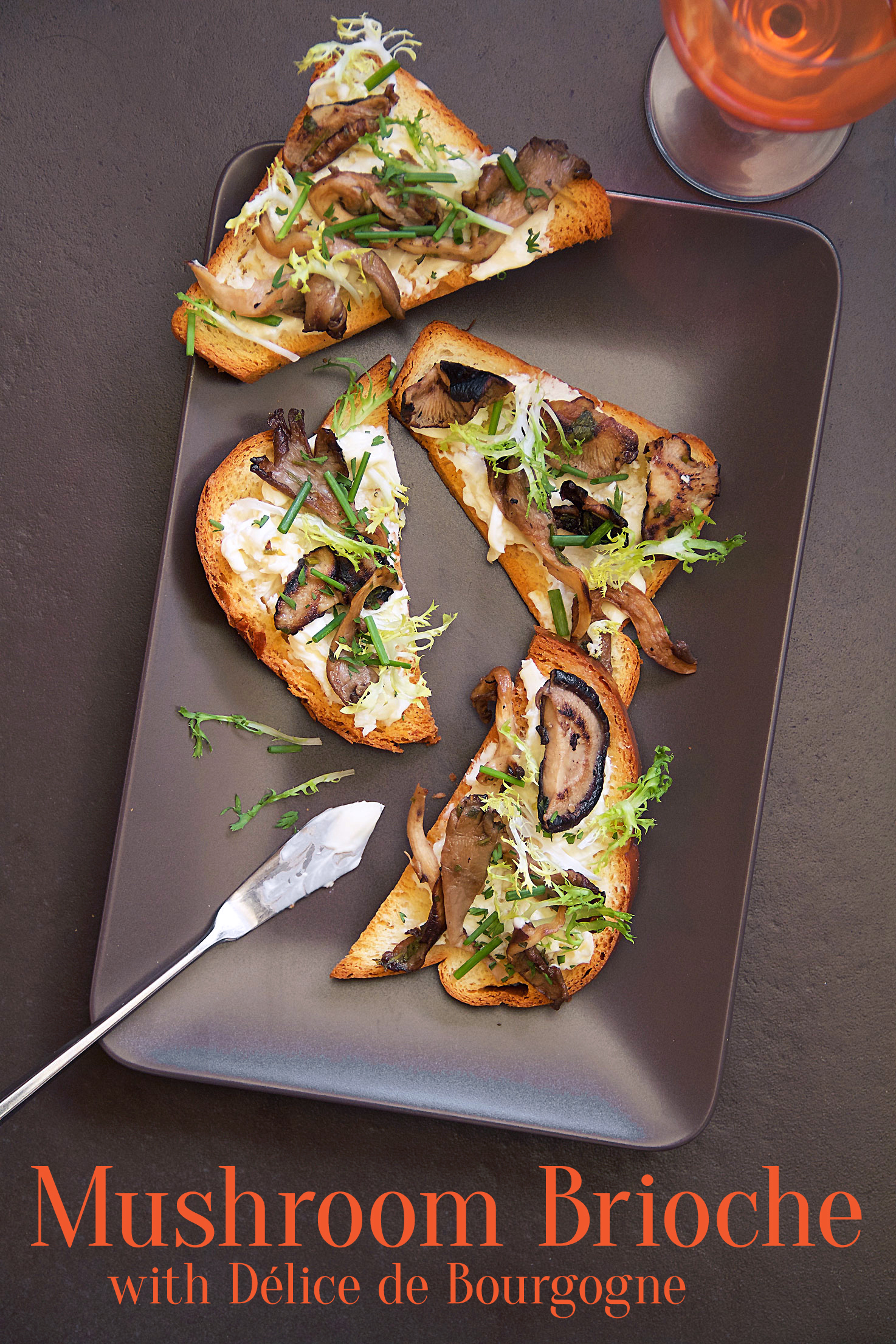 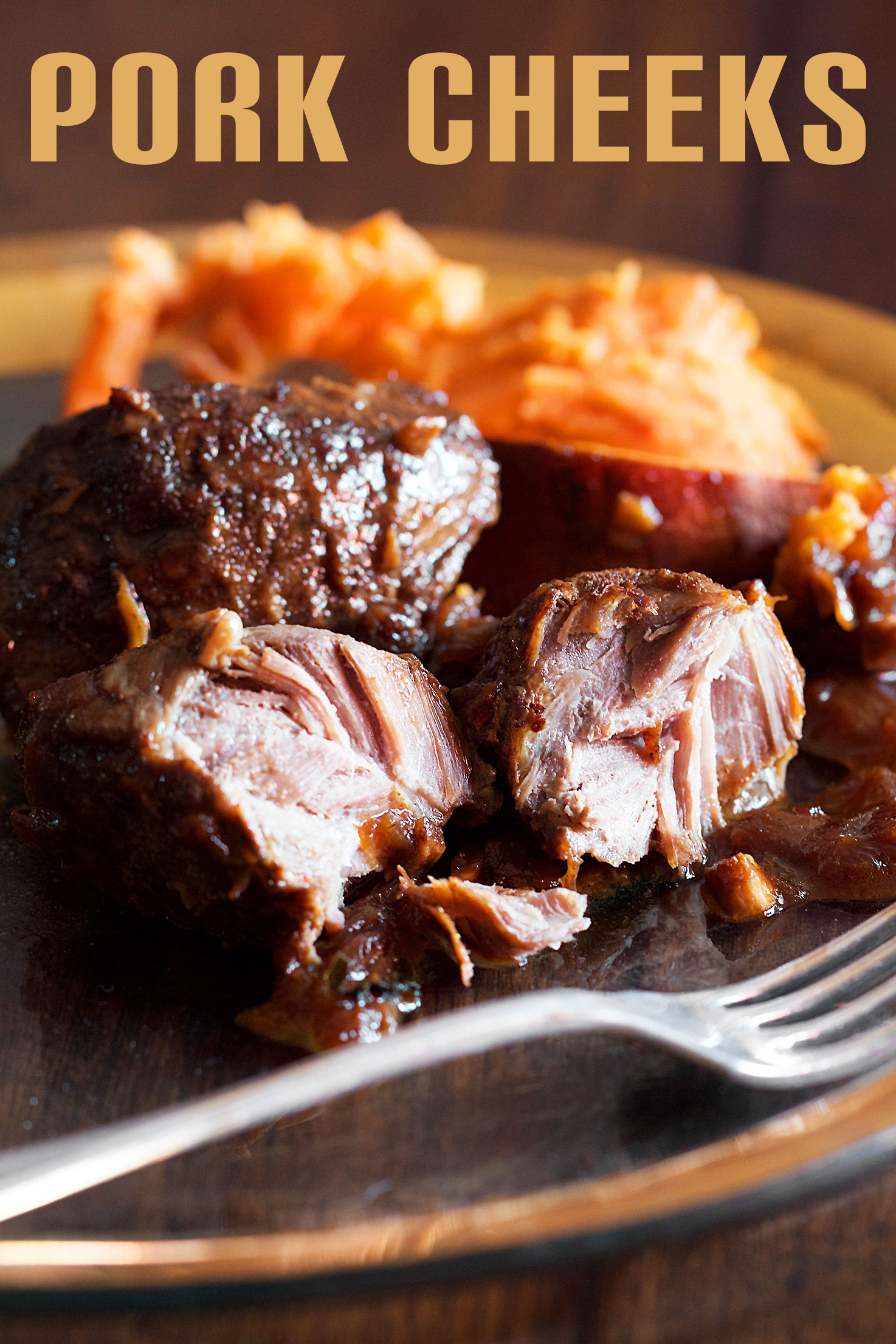