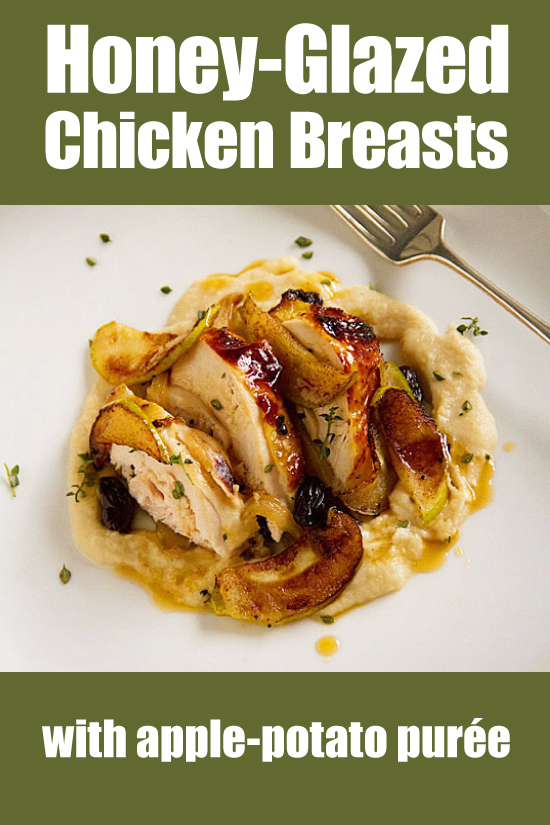 “An apple a day…” You know the rest of that phrase in the traditional sense. I know you do. But here at Sippity Sup that phrase means I’ve slipped into one of my moods and I plan to post quite a few apple recipes over the next week (or maybe even two). I live in Los Angeles (where autumn is summer). So I’m probably jumping the gun seasonally speaking. But I can’t help myself. There’s something in the (hot) air everywhere I turn. It may still feel like summer, but I know better. The seasons are changing.

Even in Los Angeles you can sense the subtle shift – as summer turns to autumn. The days seem bluer and the nights last a little longer. Hollywood Blvd crackles under the bright blue light. The Hollywood Farmers Market starts to feature Apples, Sweet Potatoes and Cauliflower. I’ve been missing them and I’m ready to welcome them back to my kitchen. So I’m going to ignore the thermometer and pay attention to the calendar. The calendar says October. That’s autumn in this hemisphere and autumn recipes I shall provide. Starting with Pumpkin Spice Latte with Nutmeg Sprinkles (which contains no actual pumpkin)! 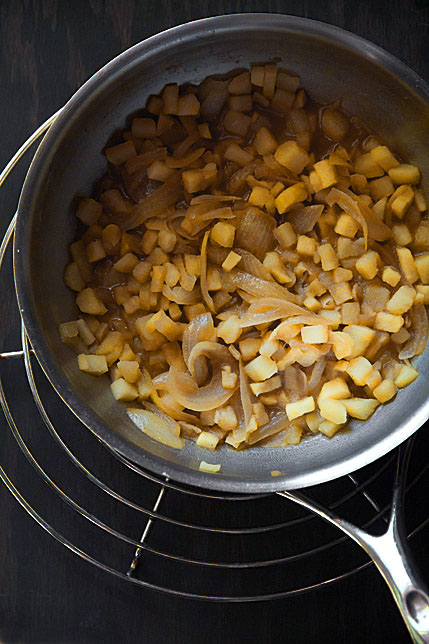 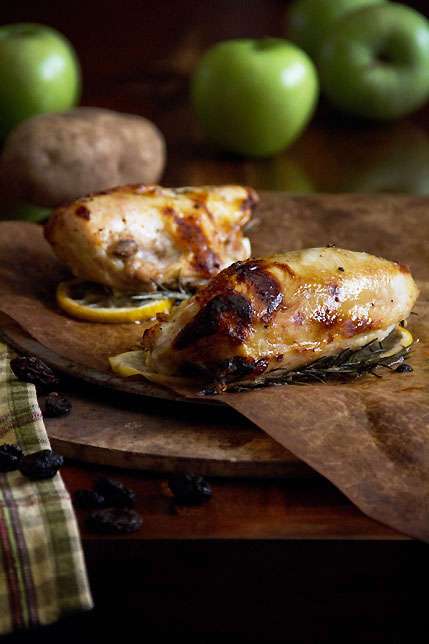 History of Apples in North America

Apples have become part of the culinary culture of these United States (Canada too I bet).

There are historical reasons why the apple is so popular, especially in the northeastern parts of this country. Pilgrims (yes of Thanksgiving fame) brought both seeds and cuttings to America. And though there is some discussion about the authenticity of a chap named Johnny Appleseed there is no denying that the tree has indeed found its way from “sea to shining sea”.

In the early days of this country sweet things were expensive, difficult to store and were just not the same sort of staple that they are today. In fact they were a luxury. Thanks to the Pilgrims, apples were an exception to this rule. They were local, prodigious, and kept well in cellars. Meaning sweets would be available all throughout the winter.

However, apples certainly do not belong to the good people of New England. Apples fed the pharaohs. In ancient Greece tossing an apple at a young woman could get a young man married – should she decide (and be athletically inclined enough) to catch it! And of course in 1665 apples were responsible for introducing the theory of gravity into the mind of Sir Isaac Newton.

So you see apples ain’t so new. But they’ve certainly caught on. There are about 2,500 known varieties of apples grown in the United States. That’s because there’s an apple variety suited to every micro-climate we have here. There are commercially viable apples as well as heirloom varieties. In other words, there’s an apple for everyone and anyone.

One reason for their success is the fact that they stand well in savory preparations as well as sweet. This makes them a standard in many cooked applications, especially in the autumn, when they are plentiful. I find them to be a terrific seasonal accompaniment to everything from roast chicken to cornbread.

I’m not saying that you won’t see a pie or a tart on these pages featuring apples in the coming days, but there are plenty of ways to showcase crisp, sweet-tart apples without having dessert on the menu.

So with that in mind I’m going to start this series of apple recipes with a savory apple recipe. Honey-Glazed Chicken Breasts with Apple-Potato Purée and Sautéed Apple Slices. I’ve even got a wine pairing to share with this apple recipe because you can’t toast the change is seasons with an empty glass. GREG 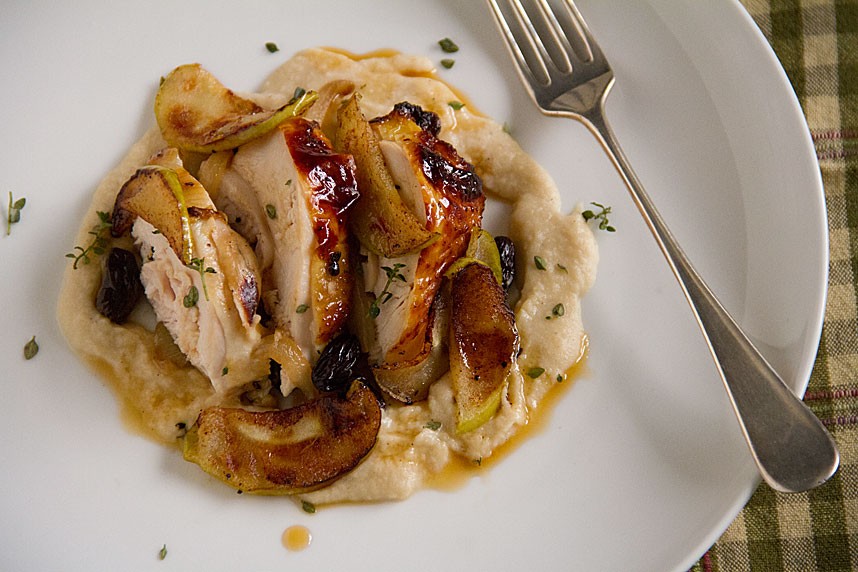 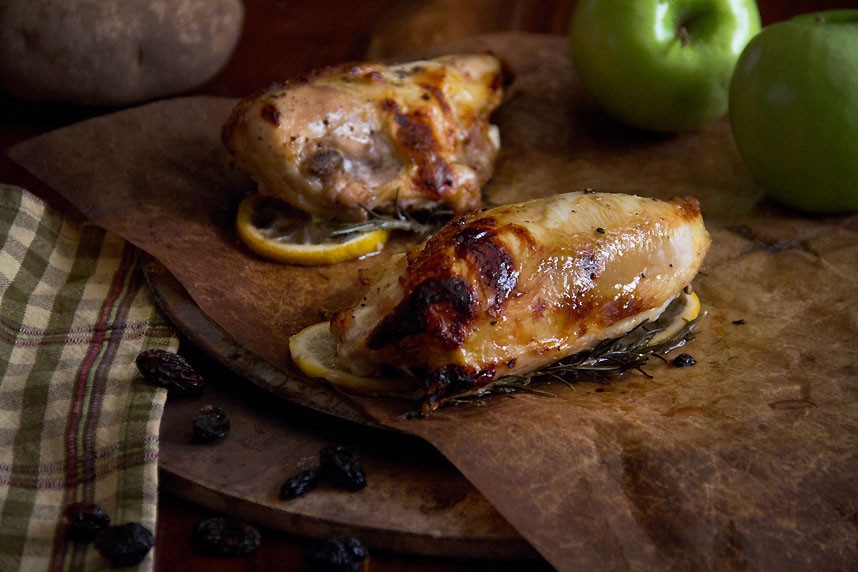 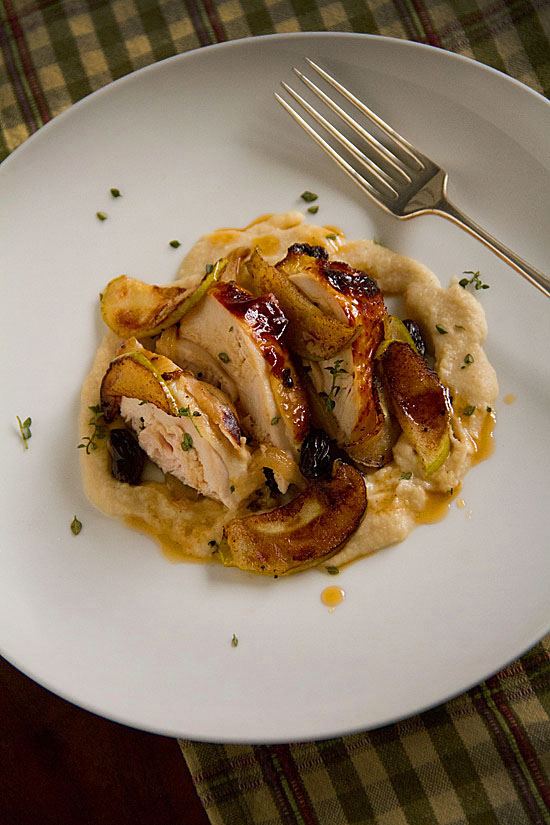 Make the glaze: In a small bowl, combine the honey, lemon juice and soy sauce. Stir until well incorporated. Set aside.

Prep the raisins: Place the raisins in a small heatproof bowl. Add enough boiling water to cover by about ½‑inch. Let them sit undisturbed 15–20 minutes, (or until plump) then drain and set aside at room temperature.

Prep the sautéed apples: Melt 1 tablespoon butter in a medium sauté pan set over medium heat. Lay the sliced apples in the pan in a single layer and cook turning once, until soft and nicely browned. Turn off the heat and set aside in the pan for reheating later.

Roast the chicken: Set the oven rack to the middle position and preheat the oven to 425°. Pat the chicken breasts dry with a paper towel then place, skin side up onto a parchment-lined, rimmed baking sheet. Season generously with salt and pepper on both sides. Tuck half the rosemary sprigs, garlic cloves and lemon rounds under each breast. Brush with glaze and roast 15 minutes, turn the sheet and baste with more glaze. Continue to roast 15 to 20 minutes more, depending on the size of the chicken breasts, or until the juices run clear and the skin begins to char. Transfer the chicken to a cutting board to rest for 15 minutes.

Prepare the purée: Once the chicken is in the oven, melt 1 tablespoon butter in a medium saucepan set over medium heat. Add onions, season with salt and cook, stirring often, for 10 to 12 minutes or until well-softened and just beginning to brown at the edges. Move ½ of the onions to a small bowl, stir in the reserved raisins and set aside. Add the boiled, diced potatoes, diced apples and stock to the onions that remain in the saucepan. Cover the pan, lower the heat and simmer 10 to 12 minutes, or until the apples are very tender. Scrape the warm mixture into a food processor, add cardamom, nutmeg, remaining 2 tablespoons butter and cream. Purée the mixture until smooth. It should be less stiff than mashed potatoes, adjust consistency with more cream if needed. Season to taste with salt and pepper.

Assemble the dish: Gently reheat the sautéed apple slices and the apple-potato purée. Once the chicken has rested, remove the meat from the bone in one piece. Slice each breast into ½‑inch thick slices, leaving the skin attached. Place a small mound of the warm onion and raisin mixture onto the center of each of 4 dinner plates. Top each with 3 or 4 slices chicken and spoon a ring of purée around the chicken. Lightly spoon some of the remaining glaze over the chicken. Season with freshly ground black pepper. Garnish with warm sautéed apples and fresh thyme. 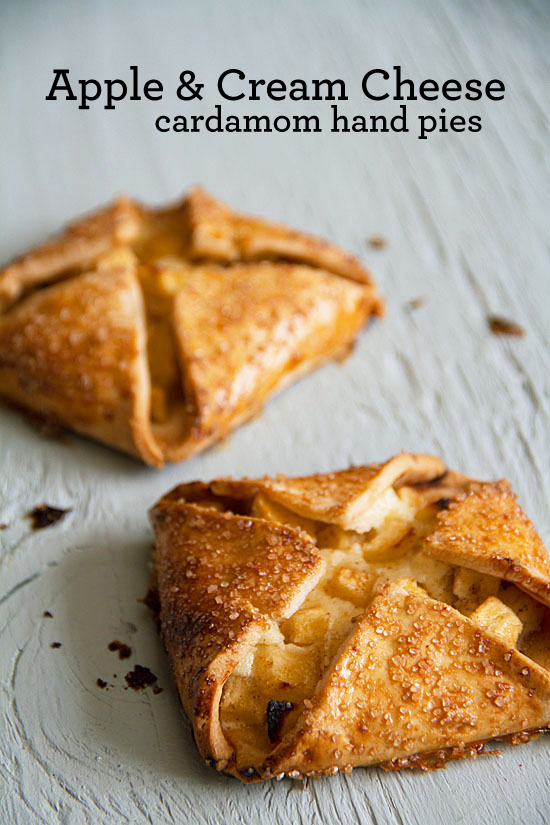