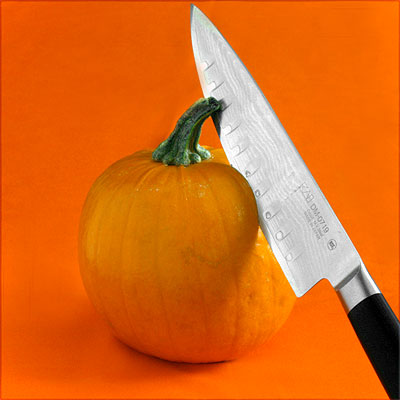 Challenge Number EIGHT! Can That Be Right? Baking Pumpkin Tarts.

For this challenge, we’re baking. Baking with pumpkin. I’m making a pumpkin tart. Or I should say tarts– plural. One sweet and one savory. Both recipes were developed by me. One reinterpreted from a classic cream pie. The other inspired by a traditional Italian leek and carrot tortine.

Pumpkins suffer from neglect in many of our kitchens. Sure, they show up seasonally. First as Halloween decorations, then re-purposed as pumpkin pie at Thanksgiving. I chose to reinterpret the traditional pumpkin pie as a tart. Because although many people like pumpkin, they often refuse to see it in any way other than holiday pie.

However, I am happy to report, pumpkins seem to be popping up more and more lately in increasingly creative recipes. I enjoyed a pumpkin, sage, chestnut & bacon risotto at a restaurant recently. I also came across a recipe for pumpkin pots de crème with an amaretti-ginger crunch. As well as more traditional preparations like pumpkin, white bean and kale ragout. All very interesting, which I hope helps pumpkin break free from the traditional binds that keep it relegated to holiday food.

But this is a baking challenge so I decided to give a modern spin on the perennially favored pumpkin pie. Because as conclusive as pumpkin pie may be to the Thanksgiving table, there’s an anomaly at work. Pumpkin pie should be a year-round treat, like apple pie or chocolate layer cake. Yet it never seems to cast aside its seasonal personification. So that’s where I am taking this challenge with sweet and savory versions that needn’t drop by just once a year like some beloved great aunt or that second cousin you just can’t seem the find the time to visit except on major holidays.

Please vote for me HERE! 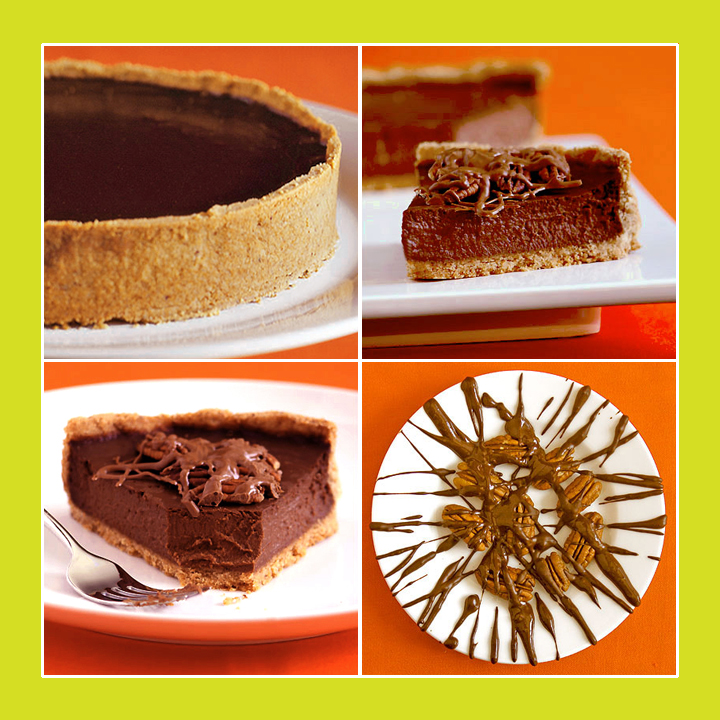 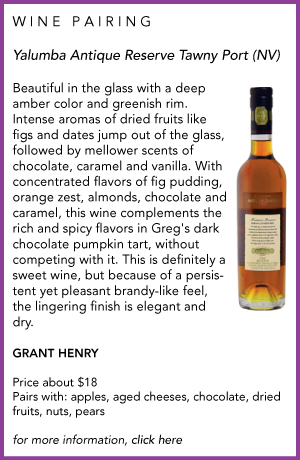 My first direction is sweet. It doesn’t really stray too far from the idea of a pumpkin pie, and that’s by design. Mine is custard-based like the holiday version that lives inside your childhood brain.

However, my tart has lots of chocolate. So much chocolate that you might be tempted to call this tart a chocolate cream tart. Because three kinds of chocolate help create a complexly rich and decadent tart with a truffle-like texture. Bittersweet and semisweet appear in the custard and milk chocolate is drizzled over pecans creating a sweet crunchy garnish that adds just the right bite.

But it’s the subtle mosaic of flavors that keep it more interesting than just the standard deep, dark and rich chocolate flavor you’re used to. This complexity comes mostly from the pumpkin, but there is a touch of spice too. It’s a nod to the holiday pie, sure– but it also reminds me of a rich and aromatically spiced mug of Mexican hot chocolate, which was my inspiration.

Nowhere is pumpkin more a part of the national cuisine than it is in Mexico. There, virtually every bit of the vegetable is consumed. The seeds are indispensable in dips and moles. Pumpkin blossoms are used in soups or are tucked inside quesadillas. The pumpkin flesh is made into soups and soufflés. The rind is often candied or pickled.

And though I’ve never seen pumpkin incorporated into Mexican hot chocolate, I think the idea of the flavors together feels just right. So ignore the calendar knowing that your chocolate loving guests will give thanks, holiday or no when this rich dessert is laid before them. They don’t even have to know that pumpkin is the sweet surprise that elevates this chocolate tart from perennial ‘also ran’ to year-round favorite. Please vote for me HERE! 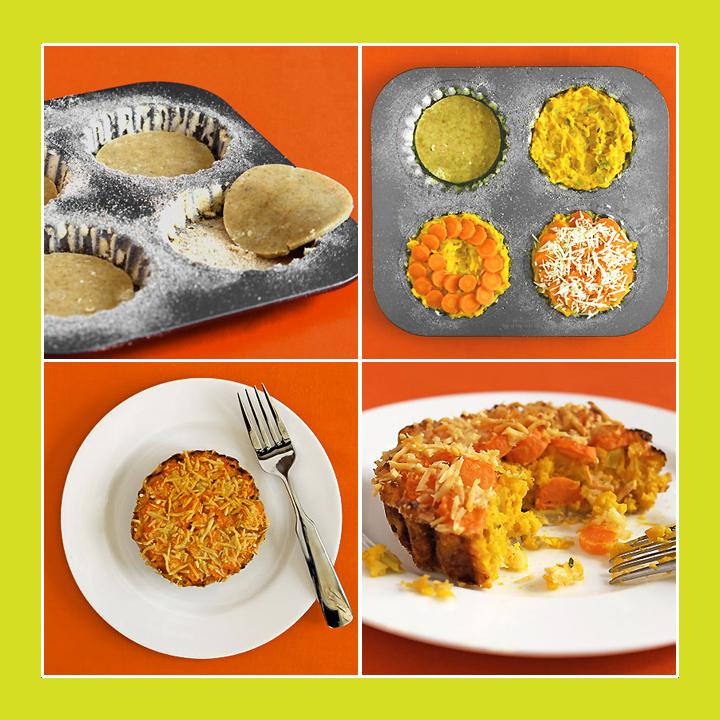 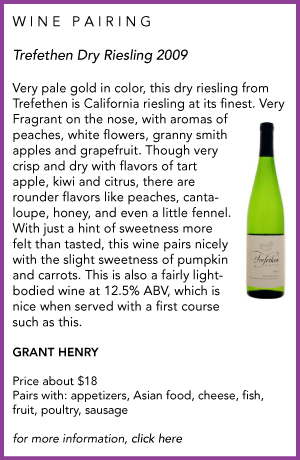 … And Some Say Savory

As a chill comes to the air each autumn, my farmers market glows with seasonal pumpkins. From oh-so-small to truly ginormous; in many colors and shapes, they beckon. But have you ever purchased one on a whim and thought ‘now what’?

Pumpkins are prominent as seasonal decor and (of course) in sweet treats like Thanksgiving pie. But this often-neglected member of the squash family is also more versatile than mere table dressing. Because pumpkin can be baked, boiled or bruléed. Fried pumpkin chunks sprinkled with Parmesan cheese are savory treats. In fact, cooks in most countries think savory first when confronted with this big golden orb.

Roasting a fresh pumpkin is an easy way to go. It adds a depth of flavor that just cannot be duplicated straight from the can. Certain recipes benefit from that depth. My second tart, this time a savory version, utilizes fresh roasted pumpkin. It also strays from the sweet path with the addition of some unexpected seasonings.

Which isn’t as blasphemous as it sounds. Because in other countries pumpkin is often prepared without the expected punch of ginger, cloves, nutmeg or cinnamon. In Italy, pumpkin literally colors fresh pasta and is served with a mixture of herbs and cheeses. The French blend roasted pumpkin with cream to make a bisque-like soup. And in Mexico chili will most likely accompany pumpkin in most any preparation.

My savory pumpkin tart is topped with carrots. When roasted the natural sugars in pumpkin are amplified. Which I think, makes carrots a natural partner to pumpkin. Once cooked the textures are similar, and the flavors relate well. But each has distinctive qualities and are able to properly assert themselves.

I’m choosing thyme and marjoram as the herbs to aromatically season these tarts. There’s something about marjoram that makes carrots taste just like carrots, only more so! There’s also the tiniest pinch of cayenne. Not enough to bring much heat, but its piquancy defines the pumpkin in a very bright way. And because this is a pumpkin baking challenge I have also included pumpkin seeds in the crust of this savory tart! Sweeeeet.…

Please vote for me HERE!

FoodBuzz Challenge #1: A Top 9 of My Own 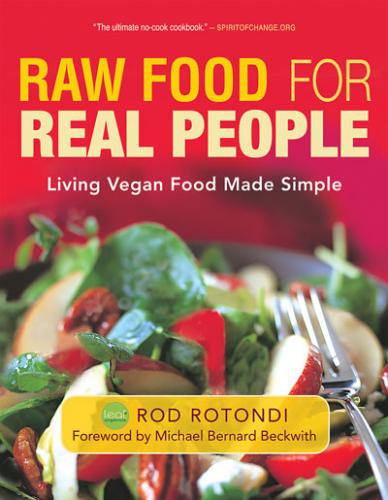 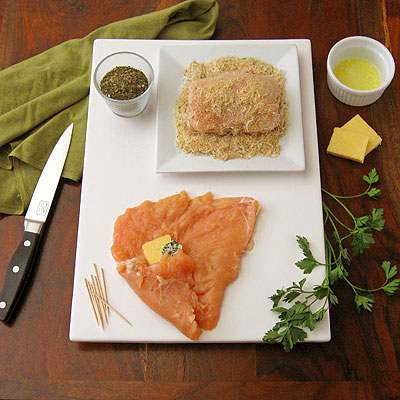