FoodBuzz Challenge #2: Turkish Mussels-Taking it to the Streets 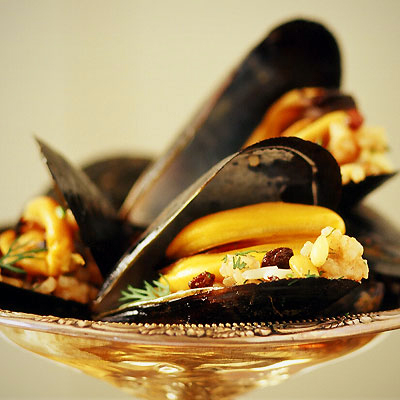 Street food. You love it or you hate it. There’s rarely a middle ground. For some travelers, seeking out street food is the ultimate exploration of authentic local cuisine and is a particularly exciting way to experience a vibrant part of a region’s food culture. Others worry that they might ingest a particularly vibrant culture of bacteria, so they avoid street food altogether.

I understand the trepidation. Nothing spoils a trip more than the tummy woes, but I am a rather adventurous eater and traveler. So I take my chances with the revenge and have only been inflicted a couple of times in my life. Which is a good thing because eating is often the point of a particular destination for me, so I don’t shy away from sampling the local fare in the same manner as many locals– on the street and on the go.

In Eastern Europe, they love street food. It’s portable and easy to eat. There’s no need for a table or even utensils– perfect for strolling through the large market squares arm-in-arm with a friend, or as a late night snack after the movies or before the dance club.

For my second Project Food Blog entry, I have decided to challenge myself and bring that sense of Turkish delight to this competition with a classic version of one of Turkey’s favorite street foods. There they are known as Midye Dolmas or stuffed mussels. Though when I first had this sublime preparation it was in Croatia where they were called Skoljkeu Stilu Istanbul. My brother Grant is pairing these mussels, appropriate to my experience, with a Croatian wine,  Coronica Malvazija Istarska.

These mussels may be in the style of Istanbul, and they are most definitely a classic Turkish dish. Still, they seem to be very popular on the streets of all the coastal countries of the Adriatic, Aegean and Black Seas.

I saw them all along the Dalmatian Coast where the shellfish, in general, is amazing and the oysters are the best I have ever had. But it was the large trays of gleaming blue-black mussels that really caught my eye. They certainly were a delightful sight. They were sold by vendors in or around the street cafés, markets and waterfronts in port towns like Trogrir, Korcula, and Starigard. They were always exquisitely and unexpectedly displayed on huge silver platters. The shells open just enough to expose a perfectly succulent orange mussel snuggled in with fragrant rice, pine nuts, and currants.

But the best of them for me were to be had in a simple, yet elegant konoba (tavern) in Split. We had arrived to take the ferry to Hvar and decided to spend some time exploring the centuries-old gleaming white marble streets of this historic walled city. We wondered into a small eatery where on charming silver plates, we were served skoljke (which loosely means “shells”). I have done my best to recreate the impression they made in these photographs.

This recipe is interesting to me because, at first glance steamed or roasted mussels seem to be a rather typical Mediterranean style dish. The French, Spanish and Italians all have delicious versions. But FoodBuzz asked us to cook from cuisines that are a bit more challenging or perhaps a bit lesser known. And that’s exactly why I chose something so familiar, yet with an exotic flair, you may not have experienced before.

Because you don’t have to get too far from the Mediterranean to see many of the same foods begin to take on Eastern influences. These Turkish mussels are subtly spiced with cinnamon and nutmeg, making them a perfect example of the food I love to present here at Sippity Sup. Because, like I said in the first challenge Sippity Sup is about fresh takes on the familiar (read more).

And what a pleasure they were to eat in the glittering white light as we waited for the ferry to arrive. The sweet, spicy aromas mingling with the fresh, clean smell of the sea. It was in this konoba that I learned the authentic art of eating these mussels– whether it be on the street, in a restaurant, or here in my own kitchen. You simply break off the top shell, squeeze on a little lemon juice, and use the extra shell as a spoon to scoop the delectable contents straight into your open mouth. VOTE for me here! 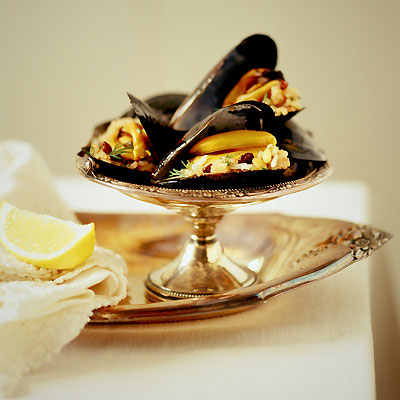 Adapted from recipes by Jeff Koehler and Greg Malouf

Soak the mussels in warm water until they begin to slightly open. Working quickly, insert the point of a knife into the opening, cutting the muscle that attaches the mussel to the shell. Gently pry open the shell a bit; do not break the hinge. It’s a learned maneuver, so don’t be discouraged if the first few don’t go so well. Repeat with all the mussels, then rinse and refrigerate.

Soak the currants in warm water about 15 minutes, then drain.

Meanwhile, add the rice to a large bowl and rinse it well under running water. Discard the water in the bowl 2 or 3 times, then cover the rice with additional water and allow it to soak about 10 minutes, then drain.

Bring a kettle of water to a simmer. Heat the oil in a saucepan set over medium heat. Add the pine nuts, onions, garlic, nutmeg, and cinnamon. Cook stirring often until the pine nuts begin to brown and the onions are translucent. Stir in the drained rice, tomato, and drained currants and cook about 4 minutes. Add the salt and barely enough of the simmering water to cover the rice completely. Lower the heat and cover the rice, cooking about 15 minutes, or until the liquid is absorbed. Add half the dill and all of the parsley, using a fork to break the rice apart and incorporate the herbs.

Transfer the rice to a large platter, spreading it out into as thin a layer as possible to assist in cooling.

Spoon a generous amount of the rice mixture into each mussel. Pressing it closed as much as possible and clean off the outside of the shell. Stack each mussel into the prepared pot and cover them with a piece of parchment cut to size. Weigh the mussels down, keeping them as closed as possible with a plate. Cover and bring the water to a boil. Then lower the heat to a simmer and cook about 12 minutes.

Remove the pot from the heat and let the mussels cool, covered in the pot at least 1 hour before serving. They may also be refrigerated once they come to room temperature and served chilled.

To serve. Stack the mussels on a platter and top with the remaining dill. Serve lemon wedges on the side to squeeze onto each mussel as it is eaten.

VOTE for me here! 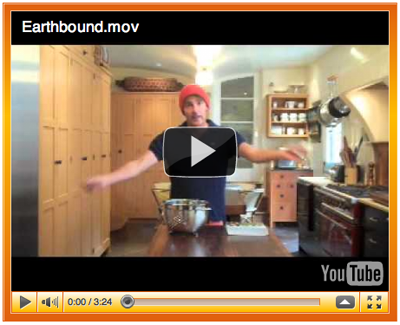