Costa Rican Guaro Sour and my Journey to the Jungle 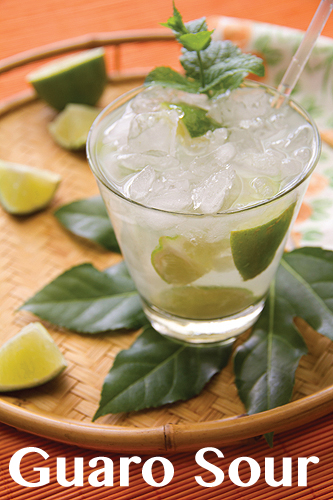 It’s a bit late to get started, I’m thinking to myself. So I impatiently shuffle in my Tevas at the entrance to Manuel Antonio National Park on the Pacific coast of Costa Rica. I’m with a fairly large group that includes a boisterous, inquisitive six-year-old. The sun is sitting high enough in the sky to be blazing down, so I try to keep to the shadows at the rim of trees that define this edge of the rain forest. Several other groups, our size or larger, begin to encroach on my shade. I’ll admit I’m feeling a bit bamboozled by the cost of this guided tour. Or maybe I just mean the idea of it, because a guided tour is not how I imagined I’d spend my time in the rainforest.

You see, I’ve been to Costa Rica before. I’ve experienced the hush and the heat. The buzz and the beauty. I’ve stood next to my partner Ken, no words between us, as the deep, dark quiet gets blasted bright by the supercharged scream of a lonely male howler monkey. I don’t expect that kind of electricity today.

For most of the group, this is an initiation into the mysteries of the Costa Rican jungle. I sense my companions’ excitement, and keep my “been there done that” attitude to myself. It may be a national park, but it holds secrets nonetheless. I know this from previous visits. It’s why I fear we’ve started too late and with the wrong intentions.

Our guide William finally shows up with all requisite equipment. I feel a little silly standing here, neck draped with outdated binoculars and a point-and-shoot camera. I fumble to shake his hand and grapple with the equipment I wish I’d left behind.

William is a Costa Rican and is handsome as hell. Not that this matters in the jungle. Or maybe that’s exactly where it matters the most. He wears standard-issue trousers tucked into brown leather boots. His shirt is official. His hair trimmed and neat. He doesn’t seem to sweat.

“Okay, Amigos,” he says with a certain radiance about him. “You should know that the park is undependable.” It’s William’s job to introduce the forest to us. His success depends on how many plants and animals he can identify in 90 minutes. It worries me that he seems to be back-pedaling.

Our group moves forward– hushed and expectant. There are too many of us and I fear we won’t see a thing. William leads us down the wide trail. We’re followed by other groups who seem nearsighted and lead-footed. I get the feeling I need to let my trepidations go– the joy of a six-year-old experiencing life for the first time does that to you. Because he’s right, he may be six, but he’s right– no matter what happens we’re in a beautiful place. 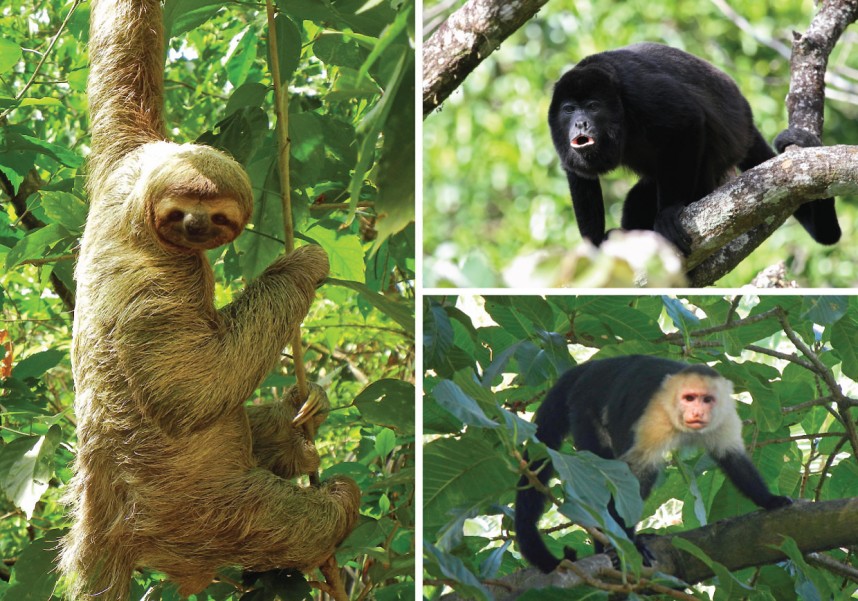 What happens however is magical– not five steps into the park, we come across a doe-eyed sloth. So close I could touch him if I wanted. He’s moving as slow as a glacier. Considering the heat, I think that’s quite an accomplishment.

Now William is explaining that we’re walking through a secondary forest. The virgin forest was cut down to create pastureland 50 or so years ago. The primary forest lies ahead.

We file by huge buttress-like tree roots and inter-planetary-sized philodendrons. A strangler fig with tendrils as thick as arms chokes a neighboring tree. William points out clusters of touch sensitive plants called Mimosa Pudica (Touch Me Not).  A huge Blue Morpheus butterfly flutters past. Next we see a frog as tiny as a thumbnail and a bird impossibly sitting on the ground looking as much like a snake as bird ever could.

Suddenly, there is a racket in the canopy overhead. “A white-faced capuchin monkey” William says. Suddenly I realize I’ve seen more nature today than I had on any previous visit.

We barely have time to recover when that electricity I described earlier fills the air. Sure enough, a howler monkey sounds his warning. It’s nothing like the muffled woot-woot of Tarzan’s chimpanzee, Cheetah. It peels like the opening sound track of a sci-fi movie. Somewhere between a blast furnace and a gale– it makes you think of the TV news when those who survived a tornado try to describe how they knew it was coming. The scream of a howler monkey is both lonely and aggressive.

We round the corner and the ocean smacks us right in the face. Two perfect beaches, split down the middle as an isthmus comes into view. Our group is in awe. Of course we are. Just then there is a crashing in the underbrush, a snout-faced cross between a big rat and a little pig screams towards us. He seems injured and confused. Which begins to worry me. Just what sort of creature is chasing him? William is laughing. “It’s an agouti.” He’s harmless.

We end our perfect hike at a perfect beach. One among us gets the idea to sneak some beers in. Beers are prohibited in this national park But this is a perfect day and our beers get by security with no problem. I’m ashamed and thrilled… and happy.

We head back to the rented house (Casa Elsa). A beauty of a place that we’ve been to before and where I once swam naked in the pool, and posted it online. Like I said, there’s something magical about Costa Rica.
Once “home” I decide to make a cocktail. Something as authentic as the experience we had today. Something with guaro.

Guaro is a clear spirit. It leads the list of traditional alcoholic drinks in Costa Rica. It was once the province of the cash-challenged drinker and has a reputation of being the “rot gut” of this country. Which explains why so many consider it a crude spirit and most tourists pass the stuff right by. But that’s why they are tourists and we are travelers…

When I came here I knew I was going to seek out guaro. I have met people who have come home from Costa Rica raving about the stuff. But before you run out to the liquor store you should know that guaro is also a generic term for rum, so there is some confusion between actual guaro and rum. Like rum, guaro is distilled from pressed sugar cane. The taste and quality varies in different parts of Latin America, but in Costa Rica the Cacique label is making a very refined guaro, distilled and filtered using only quality ingredients.

In Costa Rica guaro-based mixed drinks usually consist of pouring a shot or two into a glass with ice and pouring Fresca over it. Which has its appeal I have to admit. It also mixes nicely with other tangy citrusy soft drinks and fruit juices. This is the Tico (Costa Rican) way to enjoy this spirit.

But I decided to make my first experience a bit more elegant. The recipe for my Guaro Sour can be found here. GREG 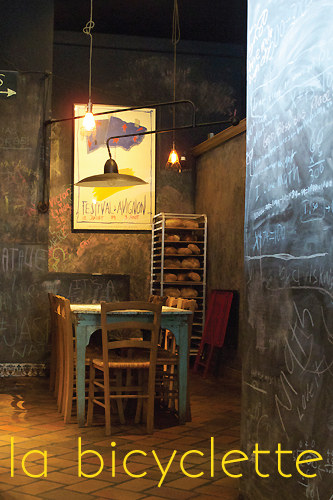 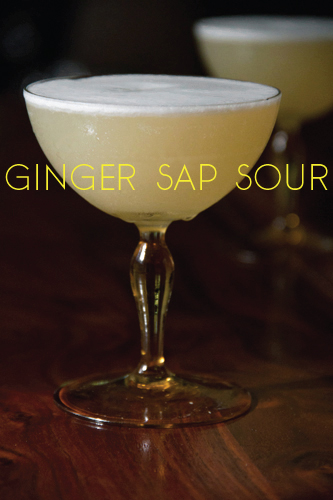 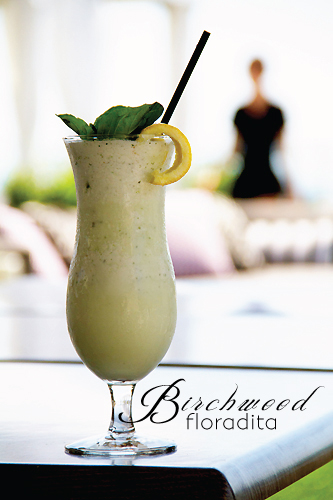