Chili That Was “Born in the Sauce” 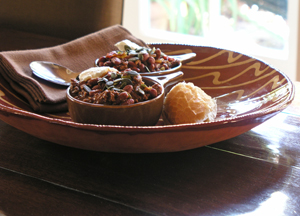 No, this is not a style of chili incorporating rodent meat. Mole is pronounced mo-LAY and it is truly a sauce. A Mexican sauce. Perhaps you might even say a Mexican obsession.

It is an amazingly flavorful, deeply complex dish often compared to chocolate. But to my palate, it is a much more intriguing mosaic of flavors.

Mole, which is thought to come from the Aztec word molli (concoction) has been credited to the nuns of the Puebla de Los Angeles. Which is just outside Mexico City. It was to be a very special honorary dish for their Archbishop. He built them a convent. So, in other words, it’s 400-year-old political payback. Isn’t that how all-important work gets done?

I am not brave enough, nor athletic enough, to attempt to make a mole sauce from scratch. It’s an arduous process of seeding, roasting, drying, grinding, mixing, tasting and waiting. Too many steps to go into here.

Besides, where would I start? There are over 40 varieties and for every variety, there are specialty sub-categories. It’s such a hands-on dish that every cook brings her or his special artistic touch. So it’s very hard to decide what exactly an authentic mole is anyway. But when you taste one you know.

My inspiration came when I read that Joe Pastry is spending a month this summer near Mexico City. Now if you know Mexican cuisine then you know Mexico City is (arguably) the heart of it. My mole’s origins can be traced back there as well (though today the mole is deeply linked to the Oaxacan state).

You probably do not know this but Joe Pastry and I have a little bit of history. Way back in the infancy of this blog (about a month ago), Joe gave a very encouraging shout-out to SippitySup. So in the time-honored tradition of â€œpolitical payback – I thought I ought to create some sort of dish that could count as payola and consider my debt done. Mexico, graft, mole… see how my mind works. Of course, I do not really know if Joe eats anything other than bread!

I chose the mole to be a suck-up. This is true. But I chose the chili for an even more selfish reason. I was in the mood for it. That’s just how things work around here. I blog what I want to eat when I want to eat it. If I can find some self-serving way to graciously communicate my longings out to the broader world, well then it’s a win-win.

Like I said. I was too chicken to attempt the mole sauce. But I live in Los Angeles. I have a terrific Mexican market right down the hill. Walking distance even! I went down there and picked up a pre-made jar of the stuff. Under any other circumstance, a jarred sauce would never pass muster in the land of SipSup! But I was planning to work that sauce out hard. Transform it even. I knew it could be a functional base for the madness I had planned.

Chili (like a mole) is one of those dishes. There are endless recipes. Countless opinions and true die-hards willing to kill or be killed in the name of the stuff. Thank goodness this blog is anonymous (Sippity Sup is not my real name).

But what all good chilis have are deep complex flavors. There is an incredible restaurant here in Los Angeles (well, Encino) called Chili My Soul. Isn’t that a great name? This place taught me a lot about chili. They are bold there. They break rules, but they do not abandon the genre. It’s how I have always lived my life. The place is a good fit for me.

Eating there gave me the cajones to experiment with my own chili variations. Through the process, I described earlier. I chose a Chili in Mole Sauce (recipe here).

Really good mole is very spicy. But it’s not particularly hot. There is never a tongue-wagging, eyebrow-sweating kind of endorphin release you expect when someone says very spicy.

To drive this point home. There is another restaurant here in Los Angeles (well, West Hollywood) where the waiter describes the food using a very flowery language. It’s called the Gardens of Taxco. In the greatest of Mexican oral traditions, the waiter comes to your table and describes each dish. No menu. I’ll always remember how one particular waiter described a chicken dish. How it tastes as if it were “booorn in the sauce, spicccccy – not hot.” 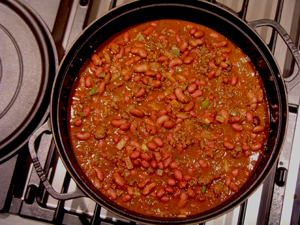 So that’s what I was going for with this chili recipe. To get there I browned the meat in chili powder, cocoa, cinnamon, cumin, and a little sugar. It was fragrant and brown and really broke down to get almost pasty  It’s a method I stole from my limited knowledge of Moroccan cuisine. The result is super flavorful meat. Really transformed into something else entirely.

As an aside I used all beef (but you could use turkey). I usually throw a bit of pork in my chili. But I wanted to control the sweetness and beef seemed the way to go. So that said. I added a few traditional chili companions like garlic, green bell pepper, and onion. I put in some tomato sauce, some diced tomatoes, and kidney beans to improve the texture.

I chose sour cream and pepito seeds as a garnish. Cheese just seemed wrong to me.

If you are Jones-ing for cheese you can serve it with quesadillas. But don’t forget the radishes.

So I have taken a Mexican obsession (mole), an American invention (chili), and a bread-centric blogger (in Kentucky) and made something you actually read til the very end. I still got it!