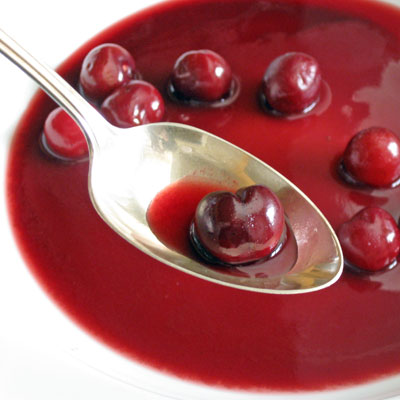 Because that amazing combination of flavors we had yesterday from Just Call Me Marta sparked something in my ancestral memory. Something from very long ago. Back when I was a snooty Francophile. Watch what you are thinking I said WAS!

There was a time when I sought out only the Frenchiest of taste sensations. This cherry soup with mint certainly counts. Anything that would transport me back to my imaginary childhood in the south of France. Those lazy golden (and entirely made up) days when I sat under the chestnut tree… la boite in hand with mes amis!

Those imaginary afternoons were always centered on food. These were the glittering days of spring when ma mere would be dancing about her wood burning stove concocting some petit amuse bouche for me to enjoy.  Something light and seasonal.

Inevitably during these pretend days of May we would have an overabundance of cherries freshly picked by Gaston (another character who only existed inside my head). 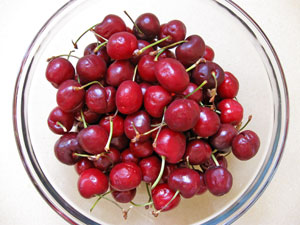 In reality I did go through a snooty Francophile phase. Only I lived in Santa Barbara and I was in college. I think I still have my beret. Anyway, it was during that time that I first had Soupe de Cerises Ã  la Menthe. Fresh Cherry Soup with Cool Mint, and I had it as a recommendation from Julia Child herself. She lived in Santa Barbara then too. And by recommendation, I mean I overheard her talking to someone else about it as I skulked near her table in a restaurant. I just had the feeling she wanted to meet me. But fate stepped in and she walked out the door with out introducing herself…

It may seem an odd combination. But you know the phrase, “as American as apple pie”? Well it was stolen and adapted from the French phrase, “as French as cherry soup”

To this day this soup reminds me of sunny days in May. So, here we are having another sunny day in May, and I want to share Fresh Cherry Soup with Cool Mint with you.

I am not saying my version is a masterpiece like the original. But I dare you not to like it!

Another thing. This recipe calls for the barest hint of cornstarch. Which is not a thickening agent I usually endorse. But that part comes from the master himself, so I followed his instruction there.

But I will warn you. Use only the tiniest amount. If you dare turn this into cherry pie filling you will be banned from SippitySup. 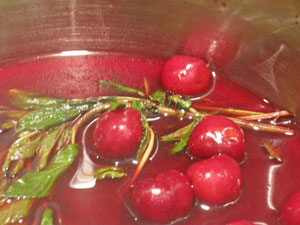 When used exactly right, cornstarch transforms the texture of this soup. It adds a just enough viscosity to render a “velvety elegant liquid”, to quote Patricia Wells.

She also recommends serving this soup in white porcelain bowls. I don’t why, but it does make it taste better!

I recommend that you do not bother to pit the cherries. I think the pit improves the flavor and texture of the poached fruit. But more importantly it adds to the sensuous quality of the experience. It forces you to eat slowly. Savoring each cherry one at a time. Gently rolling it around your mouth removing it’s tender flesh, then spitting the pit back onto your spoon, setting it aside.

I also strongly recommend you choose a so-called red mint. Something with the cooling qualities of menthol. I am using peppermint. The more herbal taste of spearmint lacks the cooling sensation that makes this soup even more orally sensuous.

1 bottle fruity red wine with a nice tannic quality (like a cotes-du-rhone)
1/2‑cup confectioners sugar
1 maybe a scant 2 teaspoons cornstarch dissolved in 2 tablespoons water
2 pounds cherries, un-pitted and left whole (you may pit them if you prefer)
8 or 10 four-inch sprigs of peppermint stems and leaves, tied in a bundle (extra mint leaves as garnish, optional) 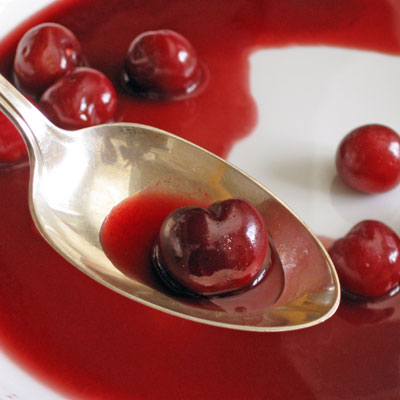 In a very large saucepan, bring the wine to gentle simmer over medium heat. Simmer until reduced by half, about 30 minutes. Try and accomplish this with out boiling the wine.

Add the sugar, stirring to dissolve and then simmer until reduced by half, about 30 minutes. Add the cornstarch slurry then whisk the mixture constantly for about 1 minute.

Raise the heat to medium-high and add the cherries. Right before the mixture boils remove it from the heat. Check for consistency. It should just coat the back of a metal spoon and have a velvety texture. You may adjust using water or a bit more cornstarch slurry. Err on the side of thinner rather than thicker, it will thicken a bit more as it cools.

When you are happy with the texture add the bundle of peppermint and the almond extract cover the pan. Set it aside to infuse for about 30 minutes.

Remove the mint bundle and discard it. The soup should be close room temperature now. Slightly warm is fine, but you do not want it to be hot.

Ladle the soup and some of the cherries into shallow white porcelain bowls. I don’t why, but this makes it taste better! Garnish the soup with more mint if desired.

NOTES: You don’t have to bother to pit the cherries. I think the pit improves the flavor and texture of the poached fruit. It also elevates the slight flavor of almond. But more importantly it adds to the sensuous quality of the experience. It forces you to eat slowly. Savoring each cherry one at a time. Gently rolling it around your mouth removing it’s tender flesh, then spitting the pit back onto your spoon, setting it aside.

I also strongly recommend you use peppermint for this recipe. The more herbal taste of spearmint lacks the cooling sensation that makes this soup even more orally sensuous.

This soup does not hold well and should be eaten within 2 hours of making it.