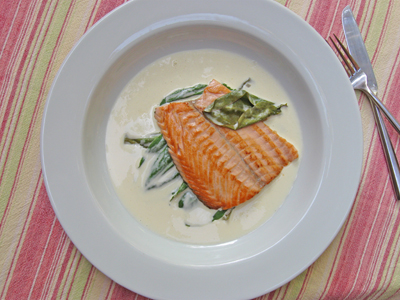 Letâ€™s have a history lesson.

I was always a good student. One of those kids that did well in almost every subject (notice I said almostâ€¦numbers still elude me).

History was/is particularly delicious to me.

Cooking has an interesting history of course, too. You donâ€™t have to go all the way back to medieval times either to find a fascinating tale.

In the 1970â€™s, in this country at least, the foodie-world was abuzz with the suddenly â€œdiscoveredâ€ truth behind â€œclassical French cuisineâ€. It was brought to our attention by the commendable talents of Julia Child. Her book Mastering the Art of French Cooking changed the way American cooks like my mother began to look at gourmet food.

As I have said before. I was raised on this kind of fare. I was a nine year old who liked chicken liver pÃ¢tÃ©. I knew crÃªpe was not pronounced crape, and sauces always started with bones. 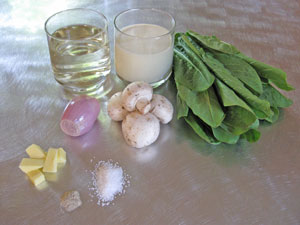 There was (is) a Michelin-three-star restaurant in Roanne, France. It was (is) run by the Troisgros bothers (well sons now). Some may say they are personally responsible for transforming French cooking. The classic Escoiffer school of thought had ruled French cuisine. Period. There were no other contenders.

But these boys changed all that. To change something as ingrained as the classic style of French cooking is an unmentionable feat. Especially in France.

But they did it. Whether they set out to do it or not, I cannot say. But the classic French style of cooking cracked just enough to make room for something that would soon be dubbed “la nouvelle cuisine”. 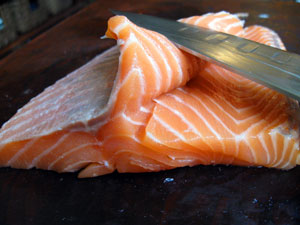 What I am going to say here and now might not shock my younger readers. But it was shocking nonetheless. Especially to classically trained French cooks such as my mother.

The Troisgros bothers began to serve a style of food that could best be called light and spare. I am not saying they chose to forgo the butter or the cream. They were true chefs after all. But they turned so many rules upside down that I am surprised they were not run out of the country.

The funny thing is they were using all the classically French components in their cooking. But the way they plated and arranged the food and the emphasis they placed on one ingredient over another changed the way the French saw their national heritage. I am not exaggerating. Food is that important in France. Gosh love them! 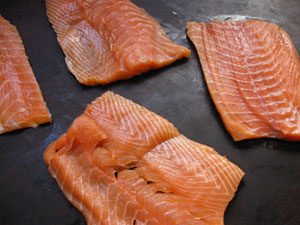 In this recipe for salmon in sorrel cream sauce, The Troisgros brothers rocked the house. They chose not to poach the salmon, but to quickly panfry it, very thin. Scallopini style. In a dry pan no less!

And if that were not scandalous enough. The sauce was not given top of the plate prominence.

Instead of spooning a lovely cream sauce over the succulent salmon, these guys placed the salmon atop the sauce, dry and unadorned.

I hope you are shocked! Because, it was simply not done that way!

Of course there were stirrings of change before the Troisgros bothers. Chefs like Ferdinand Point (1897–1955) were challenging the rigidity surrounding Escoffier’s haute cuisine recipes with their own ideas. 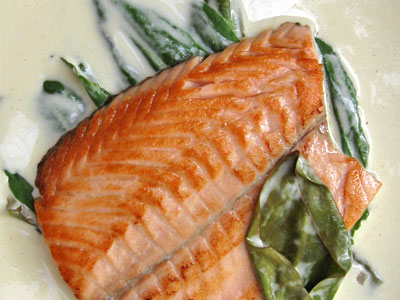 But I believe, this one dish, Salmon and Sorrel Troisgros. This lovely preparation of flash-cooked salmon with an indescribable blt of sour sorrel and sweet cream, was solely and individually responsible for the change in consciousness that led to a worldwide cooking phenomenon.

Restaurants (in Los Angeles) like Michael’s, L’Orangerie and the ubber-famous Spago would not have stood a chance were it not for the groundwork laid by these brothers.

And here is another bit of shocking historical fact. This groundbreaking bit of culinary history— is EASY to make at home!

I am not saying you (or I) could recreate it flawlessly. There is something to be said for being there at just the right moment in history. Plus the fact that American cream will never be the same as French cream.

But I have tried, and cooked, and worked, and researched, and copied, and changed, and re-worked, and further researched this recipe into a perfectly respectable alternative. Or so I humbly believe.

I will continue to call it Salmon and Sorrel Troisgros, but I suppose it will always be Saumon Ã  lâ€™Oseille to those cunning few (of a certain age) who were lucky enough to be there at the beginning. The beginning of a French culinary revolution.

Please make sure you check out my recipe. I have tried very hard to write it in such a way so as to break free of the Escoiffer ties that bind you. Because I want you be a part of history. Digestible historyâ€¦