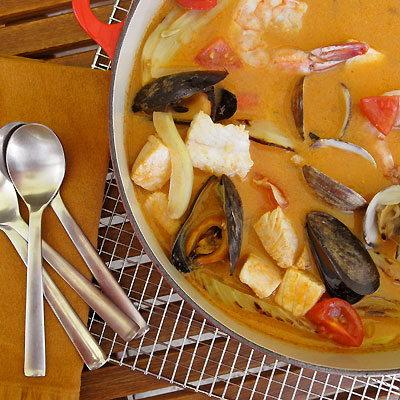 We call it rustic Italian fish soup, but if you speak Italian you probably realize that brodetto is a word that means more than one thing. To those in Florence brodetto is an eggy bread soup with lots of lemon served at Easter. However in towns closer to the Adriatic brodetto is a hearty kind of fish stew similar to what we might call cioppino, or what the Tuscans might refer to as cacciucco.

Why the confusion? Well, until modern times very few Italians spoke “Italian”! There were regional dialects and most people were more comfortable speaking the language of their families.

But all this does not explain why I had a bit of trouble finding a recipe for the traditional Italian fish soup I know as brodetto, and the point of this story. You see, it all started in Palm Springs last weekend. I know, I know– Palm Springs and Italian fish soup is a stretch, but let me explain. You see I discovered in Palm Springs that Marcalla Hazan has a wonderful version of brodetto in one of her cookbooks. I happened to flip through a copy while at a friend’s house there.

After glancing at that recipe (I saw pureed fish heads and I was sold) I knew I was destined to come home and research this soup. It’s what I do when I get food obsessed. But in this instance, I should have borrowed the book. Because when I got home I scoured the internet and my vast collection of cookbooks seeking out a version of her recipe or at least something similar enough. It was a no go! I came up empty handed. Partly because brodetto could be so many things, local ingredients seem to be the ties that bind the dish to the name. Those ingredients do not even have to be fish! 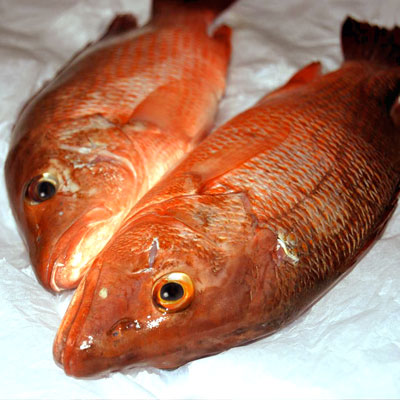 Sure there were all kinds of Italian fish soups and fish stews, by many different names. But most seemed geared to finicky modern eaters who go queasy at the idea of fish parts that are not neat and boneless. Still, why would there not be countless versions of this classic fish dish plastered all over the Internet?

Well, the rather simple answer is that to the Italians of a certain (long past) generation, brodetto is considered poor people’s food. The wives of the men who caught the fish typically made it with the leftover fish of little market value, and seemingly every wife had her own version. So as Italy’s modern food traditions were developing in the 19th century, the middle class audience that become the consumers of the Italian cookbook sorta snubbed brodetto and the name fell out of fashion. Be it fish based or bread based…

Times have changed, however, and now modern Italians who live along the Riviera Romagnola (the Adriatic coast north and south of Rimini) are rediscovering this dish. Not that this makes finding a true brodetto any easier, because true brodetto is shockingly simple, and restaurant cooks (and many home cooks) find the temptation to jazz it up irresistible. Myself included!!

Which is why I was so drawn to the rustic charms of Ms. Hazan’s version. But alas, I do not have that version or that book in my possession. So I am forced to reach back and follow the traditions of 17th and 18th century fishermen’s wives and make my own version.

I did find an interesting set of brodetto guidelines.  I followed as many as I could. But ultimately I used Ms. Hazan’s directions (or at least my memory of them) in developing this version, which can be seen in the recipe section by following the links below. 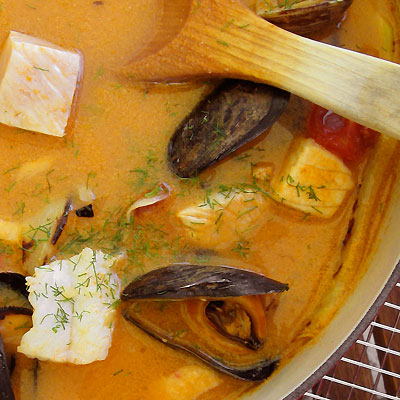 The Basics of Brodetto from Kyle Phillips

Simply put, the first rule for making brodetto is that the fish must be absolutely fresh. Small, spiny, ugly, doesn’t matter — it has to be flavorful and fresh. Thawed won’t work, nor will something taken off the boat yesterday morning.

The second rule is that the fish should be local; the fish that go into brodetto vary from town to town along the Riviera Romagnola, but include (among others): Cuttlefish, gray mullet, reef mullet, mackerel, bogue, striped mullet, mantis shrimp (when in season, and some purists shudder at them), crabs, and sole. If possible the fish should be washed in seawater, but you should only do this if you know your water is clean.

Mussels and clams can go into a brodetto, but often do not (family members not on the boats or selling the fish used to gather clams on the beaches to make clam stew), while scampi and other more prized crustaceans would never have gone into a traditional brodetto — they’d have been sold. Likewise, a traditional brodetto would not have contained anything exotic, or that had to be shipped in. One thing the fishing families did do to increase the flavor of their brodetto was to gather the heads of the fish they sold, boil them separately, and add the resulting rich broth to the brodetto pot.

Spicing and seasoning? It varied from town to town, but was simple, as the fishing families had to barter with farmers for herbs: Olive oil was a constant, and one could also find onions, fennel, garlic, parsley, vinegar (often substituted for by dry white wine), a little salt, and abundant freshly ground pepper. Tomato paste and tomato sauce (used sparingly) didn’t appear until the mid-late 1800s, and the use of hot pepper is even more recent.

Cooking vessels and times? Tradition dictates one use a low-sided broad round terracotta pot, and a gentle flame; Metal will of course also work, but will transmit the heat faster. As is the case with all mixed fish stews one adds the fish to the pot in succession, first the kinds that cook slowly and the larger pieces, and then smaller pieces and quickly cooking fish. Total cooking time will be a half hour or more.

Finally, serving: Romagnoli generally serve brodetto over slices of toasted bread that do a beautiful job of soaking up the drippings, and accompany it with Sangiovese di Romagna, a light lively red wine. The other option I might consider for a wine would be Trebbiano di Romagna, which is just as light and lively. 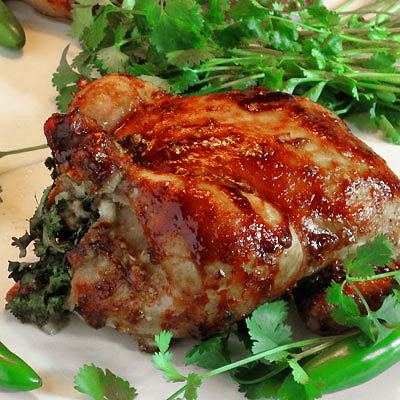 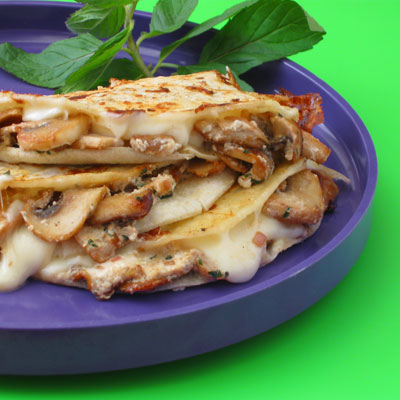