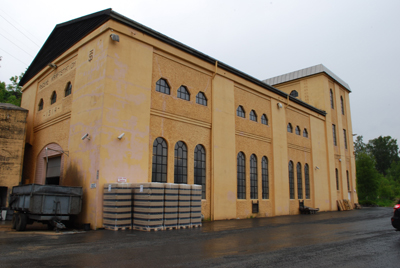 Sometimes I say on these pages: “I am not a joiner”.

It’s not something I’m proud of– it’s just something that’s true. There’s still some part of me that remains a skinny insecure kid who’d rather read books and look under rocks than play flag football. But I try to keep him under control and join the party whenever I can.

In Norway, I joined a group of writers on a media tour of the country. It was a party not to be-be missed. Because sometimes joining the party means you’ll make new friends. In Norway, I made new friends. One great thing about friends, new or old, is they help you out when you need it.

And I need it! I am on my 7th post in a row. One post every day for 7 days. That’s a Sippity Sup record. I can’t write another word. So I have turned to one of my new friends to help me out. His name is Chris D’Amico. I could’ve guessed we’d become friends. He writes about booze. He’s the managing editor of Mutineer Magazine. Which in case you didn’t know is fine beverage… redefined. I got me a subscription here, you should too.

Anyway. Chris has a story for you. A true story from our time in Norway together. It’s sorta about beer and saké. But dig a little deeper and I think you’ll find it’s about something a bit more. It all starts in this rather plain building in Grimstad, Norway. Where Chris had his first encounter with brewing company Nøgne Ø and the box that joined our group. GREG 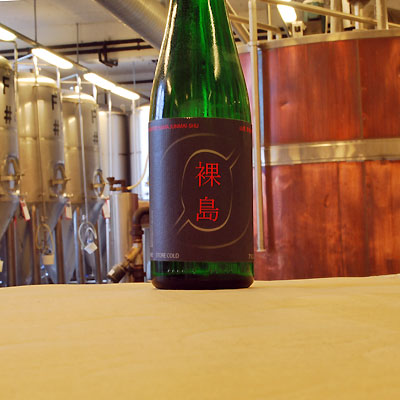 The Box Came Back the Very Next Day

Being in the business of writing about beverages for a living, I’m accustomed to “evaluation” samples (read free). They come in all shapes and sizes: the cocktail set in front of me by a mixologist, the glass of still-fermenting beer pulled out of the tank or the bottle of spirits that appears, as if by magic, on my stoop. Less than 100 words into this post, I’ve made you jealous, haven’t I? Read on dear friend, for you are about to be treated to your daily dose of schadenfreude.

There is one common theme in all these tasty treats. They are liquid… and liquids are heavy. Generally, this oft-ignored fact isn’t an issue. Liquids aren’t really heavy when carried around in your belly. Outside of your body? Well therein lies the story.

Before the epic tour of Norway where I met Greg, I scheduled a tour and meeting with the folks at Nøgne Ø in Grimstad, a tiny town in the southeast of the country. The three-and-a-half-hour bus ride from Oslo was pretty much postcard picture after postcard picture of the physical beauty and quaint New England clapboard villages that make Norway’s tourist identity.

The tour went over swimmingly. Tore Nybø and Kjetil Jikiun walked me through the repurposed hydroelectric power plant that served as their brewery and gave me my first glimpse of the Norway craft beer scene. Wow, pretty much. Nøgne Ø is slated for 100% growth in the coming year. They’ve done collaborations with Stone Brewing and Mikkeller.
One of the raddest aspects of the brewery though was the saké brewery. It’s an itch that Kjetil picked up while flying long haul to Japan for Scandinavian Airlines. After a friend introduced him to proper saké, he had to try to make it himself. Nøgne Ø sake is unpasteurized, save for one that’s meant for export.

Tasting through the Nøgne Ø lineup, I was shocked by the range of flavors that they’d coaxed from the rice. Some tasted like albariño, and others reminded me of Belgian Dubbel. They were so good that I had to share the discovery with others, to preach the gospel of Norwegian saké. Kjetil and Tore were happy to oblige, and here we meet the antagonist of the story. Six bottles of this craft deliciousness fit perfectly into a handmade wooden box, constructed with local wood and branded (in the quite literal sense) with a massive Ø. A rope handle provided a convenient AND stylish way to carry the box.

The guys also filled a very ho-hum and utilitarian cardboard box full of their fantastic beers for perusal by the group. For the return journey, the beer went under the bus, and the sake came on board with me. In 3.5 hours, I’d be back in Oslo and my beverages could sit in my hotel room until they were shared with the group. Easy peasy.

I dozed off with a smug sense of satisfaction that I was bringing the gospel to the heathens. I would be adored, the conquering hero returning from the wild lands of the South with treasure. I think I was being hoisted on the shoulders of my fellow travelers when I was awoken by an unexpected stop. Apparently, the hero would have to make a bus transfer.

Making this switch was, of course, going to be tricky. I’d overpacked already with three bags, but I now had precious cargo as well. By the time I’d gotten all my belongings gathered, there was only enough room under the bus for bags. Both the beer and saké would be coming aboard with me. I was the last one to board the bus, and my seat options were very limited. A caveat should be explained here.

Most Norwegians are not daily drinkers. They reserve their consumption for the weekends and holidays. While it was TECHNICALLY a holiday (Pentecost, a national day off for Norwegians), it was the sore-headed part of that holiday. Everyone had already done their celebrating, and they were returning to their day-to-day. I received an icy reception on the coach, and my stock didn’t gain any while I stumbled around trying to counter the turns the driver was making. Just like Hester Prynne, I bore a mark, the orange Ø.

A young lady was gracious enough to give me her seat. She said something to me in Norwegian which probably referenced my need of a 12-step program as she headed to the back. After a couple of hours of disappointed-in-me head shaking, all riders disembarked in Oslo. The group and I would have plenty of time here to quaff the fine beverage payload, and I would be free of my extra baggage.

That storybook ending was not to be. Varied arrivals of the rest of our tour crew and long days of shuffling about the city left the beer and saké untouched. I started an exclusive beer tasting (spaces limited to one), knowing that I’d either have to drink it or carry it, but the saké remained verboten.

Our time in Oslo quickly slipped through the hourglass, and we were off to ride the rails. By then, thankfully, I’d managed to look pitiful enough with all my baggage to have some help with carrying the drinks. Everyone shared the “privilege” of bringing them to the interior of the country via rail and bus (due to an unforeseen fire-related transfer) to lovely, fjord-adjacent hotels. We never could seem to get the timing right for the tasting though, and while I made a herculean effort to polish off the beer, the saké, nestled in its Norwegian wood cradle, remained. 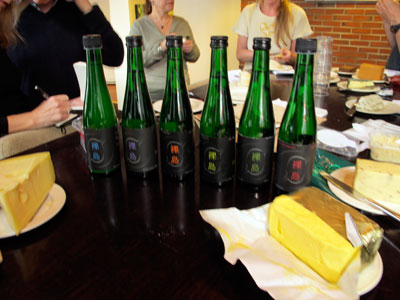 The arrival at our final destination, Bergen, called for desperate measures. We WOULD taste this saké. A tasting time was forced into the itinerary. Cheese would accompany it. Mandatory fun would be had. When we did finally settle down to the tasting, the saké wasn’t even the star. It was the camaraderie of a group of people thrown together from disparate worlds that had shared experiences and become friends.

I have to admit to you that what I did after the tasting, I’m not proud of. The box came with us to our final dinner. Our lovely host, Linn of the Bergen Tourism Board, led us (and the box) to the top of Bergen via cable car to dine at sky:skraper. On the ride back to the hotel, I asked someone to leave it in the lobby for me to collect after I came back from exploring the beer bars in the city. When I came back, I knew it was there, but I ditched it. I saw it again in the morning, before we departed for the airport, but I did my best not to look directly at it. I didn’t want to be reminded of what I’d done. 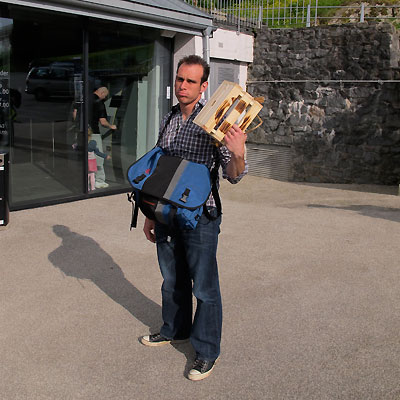 The story I tell myself today is that some lovely pensioner from Germany or Great Britain found it and took it home with them where it functions happily as a spice rack or somesuch.

Please don’t get me wrong; I enjoyed my time with the box and beverages. I certainly don’t want to seem ungrateful for them since they were out of this world. My grandmother always told me to never look a gift horse in the mouth, but Grams never had to carry that horse around.

Tune in tomorrow when Chris, Linn, Aja and I go on a Bergen Beer Crawl. All the best spots– not in the guidebooks. Maybe some Nøgne Ø too. GREG 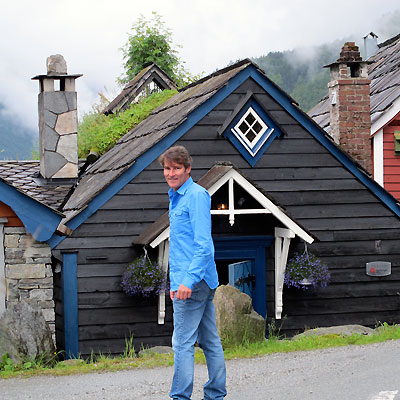 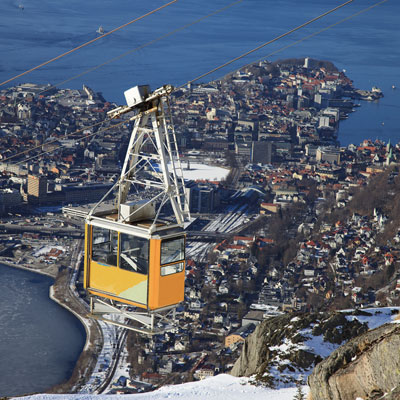 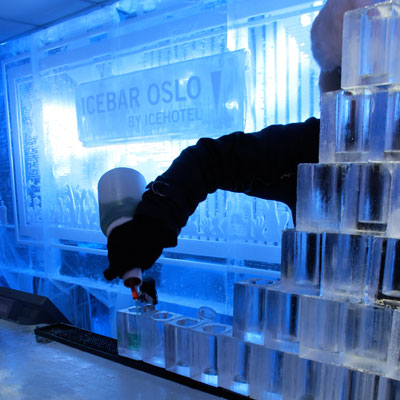