That Thar Is Arctic Char 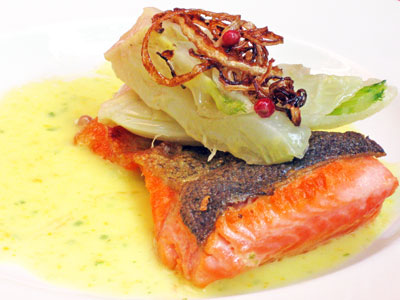 As promised here is my “later in the week” recipe for arctic char. As Seafood Watch said in the earlier post, char is a terrific alternative to farm raised Atlantic Salmon and a great way to take the pressure off the west coast salmon fisheries which are currently closed due to overfishing.

In appearance char is very similar to salmon, at least wild salmon. Because the color of the flesh is the same deep red hue. Farm raised Atlantic salmon’s color is enhanced with chemicals.

The most obvious visual difference is size. The char must be a slightly smaller fish because there seems to be a lot of apron on each fillet. The apron is the thinner flap of flesh that is found on fillets of fish, basically the belly.

Tastewise there is some similarity between salmon and char as well. But I think it tastes more like trout. Steelhead trout to be precise. Which, of course a lot of people say tastes like salmon.

So here is my promised recipe. I am calling it Artic Char with Asian Braised Fennel and Citrus Emulsion. It starts a day before hand with an oil infused with Asian flavors. You might want to double this portion of the recipe because this flavorful oil is quite good in a number of other ways. I am sure you can think of those on your own. 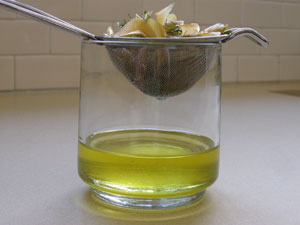 The braised fennel borrows heavily from my technique for glazing vegetables. So review that for more details. The pink peppercorns are a very nice touch. They can be had at good spice shops. But I realize that it will be nearly impossible to get 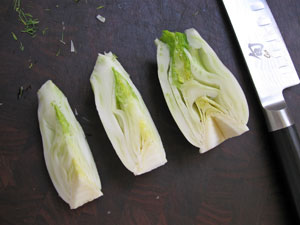 a pink peppercorn leaf unless you have a tree growing nearby. They are very common in So. Cal. 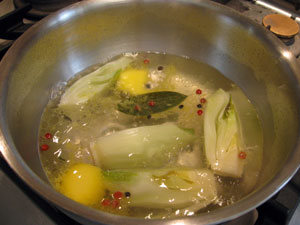 I call this a citrus emulsion, but it’s not so emulsified to be confused with an aioli because there is no egg in it. But the process is similar. I also have a video on aioli emulsification that may be helpful.

The fish itself is easy to make. You want a very hot pan, and you 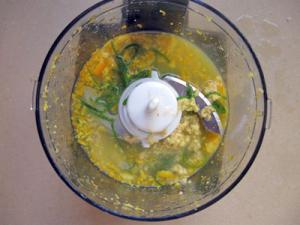 want to get a very crisp skin. Like salmon you want a rare to medium rare interior. So watch the fish closely so as not to overcook it. Remember it may look like salmon but it’s thinner and cooks quicker.

2. Heat the oil to a near boil in the microwave. Approximately 3

minutes. Remove from microwave cover, and steep overnight. Strain and reserve oil the next day.

1 Trim the fennel bulb and quarter it lengthwise. If the bulb is large you may need to cut it 6 or 8 pieces. Each about 1″ across at widest point

2. Place the fennel in a skillet just big enough to hold the fennel in one layer. Barely cover the pieces with water about 3/4 of a cup. Add the infused oil, butter, peppercorns, pink peppercorn or bay leaf, sugar and a pinch of salt. There is a delicate balance between pan size, vegetable size and cooking times. You want it all to reduce to a glaze about the same time the fennel is cooked to perfection. 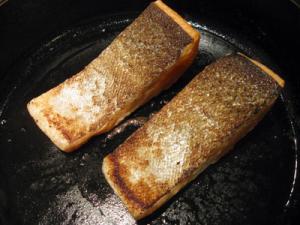 3. Bring the liquid and fennel to a boil, then lower the heat and gently simmer about 20 minutes. The liquid should reduce down to a shiny glaze in this amount of time. Try and work the timing out so this happens with out overcooking the fennel. You may have to remove the fennel and continue reducing the glaze to get the timing just right. When finished glazing, remove the fennel from pan and set it aside. You will return the fennel to the pan and gently reheat it when you are ready to plate.

1. For citrus emulsion combine all the ingredients in a blender or mini food processor. Blend on high for 2 minutes. You may substitute any combination of citrus you have handy.

1. Heat 1 tbsp. canola oil in a sloped sided skillet large enough to hold the fish with out crowding. Bring the oil to near smoking.

2. Then add the fish to the pan and cook undisturbed, skin side down for about 2 minutes. The skin will release itself from the pan when it is ready. Do not attempt to turn it over before that. You will see a nice golden crust forming around the edges.

3. Flip the fillets and cook an additional 1 1/2 to 2 minutes until almost medium rare (it will continue to cook after it leaves the pan).

4. Drizzle some of the citrus emulsion onto a plate in an attractive manner. Lay one fillet in the center of each plate and top with 2 slices of the reheated braised fennel.

5. You may garnish with any combination of extra pink peppercorns, fresh fennel fronds and fried shallots. Add a drizzle of the infused oil over the top. Serve warm.