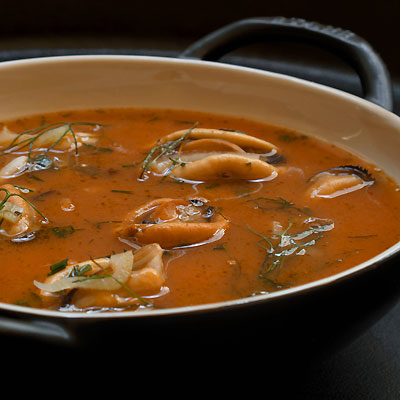 I don’t know whether to say I have a cooking lesson or a history lesson to share with you today. Either way it all starts (and ends) with Roast Tomato Soup with Mussels & Fennel, so I hope that much catches your attention and you’ll stick around for the lesson.

It’s a lesson I picked up from an old book. You see, I like old cookbooks. I grab them when I see them. I have one called Italian Bouquet from 1958 and I turn to it again and again. Though technically it’s not a cookbook as it contains very few recipes. It’s really more of a food lover’s epicurean travel guide to Italy. It offers all sorts of interesting information about regional Italian cooking traditions.

Recently I was flipping through this book and came across the section on Sicily. Many of the foods typical to the region are described here, and since Sicily is an island a lot of space is dedicated to seafood.

Which sets the stage for an interesting culinary technique I learned from this book. It’s a great way to add authentic of the sea flavor to soup, without using a whole lot of actual seafood. Which may seem odd. But remember Sicily is traditionally a land of extremes. So when a Sicilian cook’s fish monger was unable to supply her with all the fish she wanted for her brodu di pisci, or the family’s budget didn’t allow for an elaborate array of fresh fish, she had a trick. She’d use a combination of garlic, parsley, chilies, and salt pounded into a rough paste and then fried in local olive oil. This paste could be added to water and used as a simple stock for soup. The miracle of this method is that it produces a stock that does indeed taste a bit like the sea. 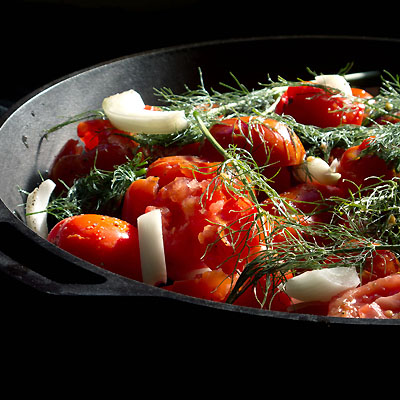 This  seems to me to be a simplified version of soffritto which is commonly found in Italian, Spanish and Catalonian kitchens. I have turned to Thomas Keller’s version countless times to add depth and richness to many dishes and sauces. He describes it as a ‘building block’ to flavor. Mr. Keller’s version is sweet with slow-cooked onions and can take as long as 2 1/2 hours to create.

I don’t always have an extra 2 1/2 hours to make a ‘building block’ for a soup base, and I suspect the fictional Sicilian ‘Nonna’ I am learning from in my book did not either. So when I saw ‘her’ version– which skips the slow and low frying of onions, I was intrigued. Because it comes together in just a few minutes.

The book also describes how families of meager means could not always afford the best seafood available at the local markets. But nearly everyone could wade out into the Mediterranean and harvest mussels. So they did. When those mussels were cooked in the simple slightly salty stock a flavorful soup could be had. So ‘Nonna’ and her technique are the genesis for this recipe for Roast Tomato Soup with Mussels & Fennel.

But ‘Nonna’ is not the only cook with a trick up her sleeve. I know how to coax big flavor from simple ingredients too.

It’s December, even here in Los Angeles I can’t get my hands on really good tomatoes. But the market always has Roma tomatoes. Often they are a little pink and pretty much inedible this time of year all on their own. But, their sweetness can be amplified with roasting. In this soup I roast all the vegetables before pureeing and pressing them through a sieve to make a silky sauce with tons of taste. This sauce is added to the stock I made to taste like the sea, and in which I cooked the mussels.

Lastly mussels overcook in an instant so I like to add them pre-cooked straight into individual soup bowls. Then I can pour the hot broth right on top. The mussels get reheated without further cooking as would be the case if I added them to the soup pot before reheating the broth.

Heat the oven to 350 degrees F. Put the tomato pieces with all of their juices, the chopped onion, 2 chopped garlic cloves, and the fennel stems and most of the fronds (save the bulb for the soup and a few feathery fronds for garnish) onto a parchment line rimmed baking sheet. Drizzle with 1/2 cup olive oil and season well with salt and pepper. Toss to get all the vegetables coated in oil. Roast the vegetables about 1 hour and 15 minutes until slightly charred, rotating the sheet halfway through cooking. Remove from oven and let cool somewhat.

Scrape the vegetables and any accumulated juices into the bowl of a food processor. Pulse 10 or 12 times, scraping down the sides once or twice, until a very rough puree is formed. Push the mixture through a fine meshed sieve or tami using a wooden spoon into a clean bowl. Work in batches, discarding the solids as you work. You should get about 2 1/2 to 3 cups of silky smooth sauce, thick enough to coat a wooden spoon.

Quarter the fennel bulb lengthwise then remove the core from each section. Slice the fennel crosswise into thin slivers. Set aside.

Using a mortar and pestle grind the remaining chopped garlic cloves, parsley, red chili with its seeds, and a large pinch of salt into a very rough paste. Heat the remaining 1/4 cup olive oil in the bottom of a large soup pot or Dutch oven. Add the paste and fry until fragrant about 3 minutes. Add the water to the pot along with the fennel slices and bring to a boil. Lower heat and cook until fennel softens somewhat, about 8 minutes.

Add the clean mussels to the pot and cover it with a lid. Cook until the shells open, about 4 minutes. Remove from heat and let the mussels cool in the liquid until they can be handled easily. Once cool enough, discard any mussels that did not open and remove the rest from their shells. Discard the shells. Divide the mussels between 6 shallow soup bowls.

Add the tomato sauce to the broth in the soup pot, adjust seasoning. Bring to a boil, then pour some of the hot broth over the mussels in each bowl. Garnish with reserved chopped fennel fronds. Serve hot with crusty bread. 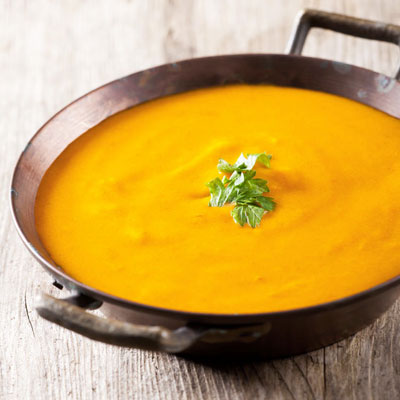 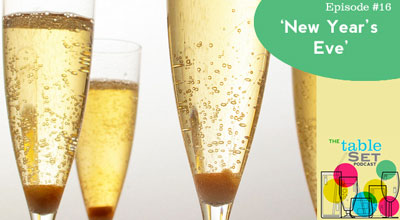