Shrimp or Prawns? That is The Question… 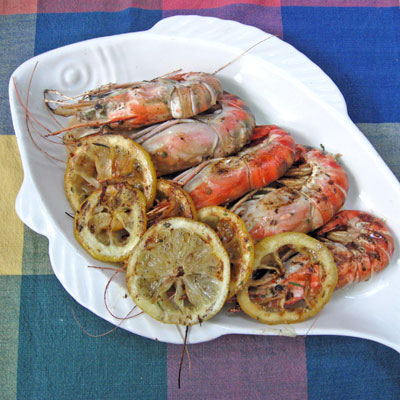 I don’t see them in my market much, but when I do I usually pick them up and bring them home. Sometimes they are so big it takes two people to carry them home.

Okay, I am exaggerating there. But it is true prawns can be giant. But it’s also true that there are some pretty big shrimp in this world. To further complicate things giant-sized shrimp are often labeled prawns so that they seem more special. But enormous shrimp are not really prawns. Or are they? 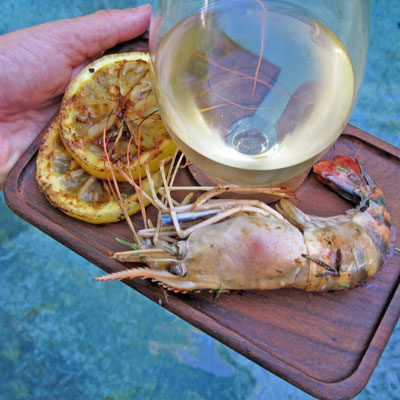 My own experience and travels have taught me a few things. First, some very large prawns can be found in rivers of tropical countries. There is also a completely blind prawn that spends its whole life in the utter darkness of underwater subterranean caves.

These facts have led me to believe that shrimp come from the sea and prawns are from freshwater sources.

But what about the famed Santa Barbara Spot Prawn? These guys are certainly a large-sized crustacean. They are indeed called “prawns” and they certainly come from the ocean. In fact, they come from the way deep ocean off the western coast of North America. Wouldn’t that disprove my “fresh water prawns” and “salt water shrimp” theory?

Well, no it wouldn’t. Because, despite their size (and their name), Spot Prawns are actually shrimp! Arghhhh! No wonder there is so much confusion.

But I do have proof that the theory about prawns in fresh water and shrimp in salt water is indeed false. Because guess what? The super tasty (but over fished) Ridgeback Shrimp, which are tiny little creatures compared to Spot Prawns, are indeed true prawns. Are you still with me?

So prawns can be big or small. They can come from the ocean or not. That’s not very helpful, is it?

However, prawns (no matter the size) do tend to be meatier than shrimp. So there is one difference. But “meatier” is a fairly subjective term, isn’t it?

I need something more concrete. Maybe even scientific!

Well, let’s start with the things that make shrimp or prawns similar. Both are decapod crustaceans. Deca (meaning 10) and Pod (meaning leg). Crustacean is the name of creatures with exoskeletons. So shrimps and prawns are both “crusty” creatures with 10 legs. Both can be found in salt and fresh water at any point on the globe. They both travel in the search of their food, and to them traveling means swimming. Both shrimp and prawns tend to stay near the floor, or along vertical underwater cliffs. Culinarily they have similar flavors and textures. They both come in a wide range of sizes from itty-bitty to whoa-mama!

However, shrimp and prawns are in different sub-orders. Sub-orders often indicate that there are important biological differences with in an order. Prawns are in the sub-order Dendobranchiata, while shrimp are sub-ordered as Pleocyemata.

Though the biological differences do indeed exist. To the casual diner (I mean observer!) the differences may appear non-existent. But the difference lies in the “crusty” parts and by that I mean the exoskeleton. The exoskeleton is made up of interlocking plates. On the abdomen, these plates appear as flaps. Without reaching beyond my intellectual capabilities, let’s just say that this is where the only ascertainable difference lies, somewhere between the first abdomen flap and the last. The crux lies in the way they overlap (or not overlap). Other than that these guys are pretty much the same creature.

Unfortunately for the YOUs and the MEs, these tiny differences usually get quite lost. Especially in the modern world where our seafood may have been processed and cleaned long before we ever get a peek at it. So you may never know whether you are eating shrimp or prawns.

But I need something more decisive. Something I can hang my dinner napkin on. I need useless information of questionable validity that I can pass along with authority at dinner parties.

So I asked my brother Sip! (he’s very smart, or do I mean smart ass) what he thought the difference between shrimp and prawns were. He said shrimp pair with Sauvignon Blanc and “meatier” prawns work better Viognier. Which seemed like a clear and sensible distinction. I wonder why these so-called “scientists” never thought of that?

Wash the prawns well and put them into a shallow dish as close to one layer as possible. Then set them aside at room temperature.

In the bowl of a food processor combine Parmesan cheese, garlic, lemon juice, and a pinch each of salt and pepper. Pulse 3 or 4 times to mix. Then with the machine running, slowly drizzle in the olive oil until a thick creamy sauce is achieved. You may not need all of the oil. Once a thick and slightly chunky texture is achieved mix in the rosemary by hand.

Spoon about half of the Parmesan garlic sauce on top of the prawns and toss to coat well. Snuggle the lemon slices between the prawns and set the dish aside about 1/2 hour to marinate.

Heat the grill or grill pan. Then shake or wipe off the excess sauce from the prawns and lemon slices. Transfer them all to the grill over white coals or onto a grill pan set over medium-high heat. Grill the prawns, turning once until they begin to change color to pinkish and are cooked through, about 3 minutes per side.

Pour the remaining Parmesan garlic sauce onto the bottom of a serving plate. Arrange the cooked prawns and grilled lemon slices on top. Garnish with additional rosemary leaves. Season with salt and pepper and serve immediately. 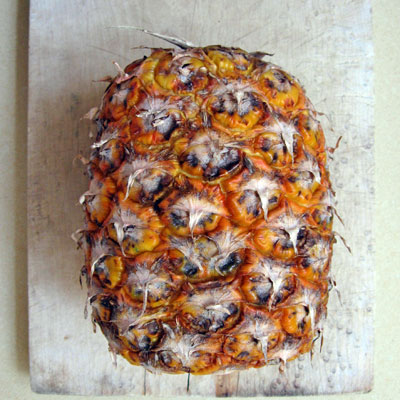