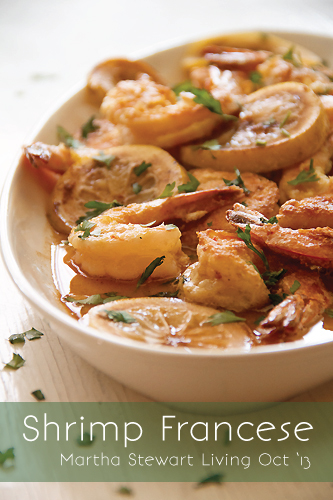 I was flipping through the current issue (Oct ’13) of Martha Stewart Living and came across a recipe for Shrimp Francese. It’s a simple preparation of very lightly breaded and pan-fried shrimp served with lemon-butter sauce. The reason the recipe caught my attention is because I’d only ever seen chicken or sole served this way. The best way to describe it is to say it’s like piccata without the capers.

One of the things I love about Martha Stewart Living is the wide range of food they present. Sure there’s the requisite “healthy snacks for kids” (yawn), but they also have more challenging recipes. What I love most though are the recipes that seem to have been taken from some specific time or place. This Shrimp Francese recipe is exactly that. It’s an old-school, east coast Italian restaurant favorite with a vaguely French sounding name. The food geek in me just eats that kind of deliciousness right off the very page.

Food Geek Fact #2: However it’s neither French nor Italian. It’s American. New York American particularly. In fact it’s hardly even known outside the five boroughs of its origin. There are similar methods of cooking foods this way in Italy. An aged mozzarella dish comes to mind. But they’d be more likely to call this preparation indorati e fritti (hand-dipped and fried).

The only reason this geek had those facts at his fingertips is because I have an old cookbook by Lyn Stallworth and Rod Kennedy, Jr. called The Brooklyn Cookbook. Their chicken version caught my attention years ago. Partly for its simplicity and partly because I loved the Brooklyn backstory the authors attached to the recipe.

WillaKenzie Pinot Blanc is an estate grown white wine from Oregon’s Willamette Valley and is made from 100% Pinot Blanc grapes. It has a pale yellow hue with medium concentration, and little variation on the rim. It offers moderate yet enticing aromas of pear, melon, citrus and green apples, with perhaps a touch of orange blossom. With […]
Grant Henry

It’s a dish that had everything going for it. It seemed destined to become an Italian-American classic. Evidently (in the 1950s) Chicken Francese was almost as popular as veal and chicken parmigiana in the Brooklyn restaurants where it was served. But something must have happened. Because today piccata dishes are well-loved, but Francese– not so much.

Food Geek Fact #3: There’s a nice recipe from Lidia Bastianich for Chicken Francese in Lidia’s Italian-American Kitchen. When I saw that I figured this dish was about to catch on. I even wondered if they’d start serving it at Mozza. But nope I asked a bunch of west coast food geeks about Francese and drew unanimous blanks.

So you can see why I did a double take when I saw this recipe in the magazine. I liked the idea of modernizing a nearly forgotten classic. Shrimp makes this dish a little modern and maybe even a little special. It also cooks up quickly and easily. I promise no matter what level of cooking skills you possess you can make this dish as good as Martha (or at least as good as me).

The real reason this recipe for Shrimp Francese stopped me in my tracks is because I’ve been rooting for this mostly little known dish to find favor with folks once again. If there’s anybody who can get something onto the radar of food geeks everywhere it’s Martha Stewart. I often credit her for teaching me how to cook. In the 1990s I used to watch her 9am TV show everyday. I know I was supposed to be getting my then struggling photo career going, but I always found a way to delay the cold calls until after the Martha Stewart Living show ended.

So do me a favor and make Shrimp Francese and give this recipe a new start for a whole new generation. Let’s get together and beat the piccata pants off the competition. GREG 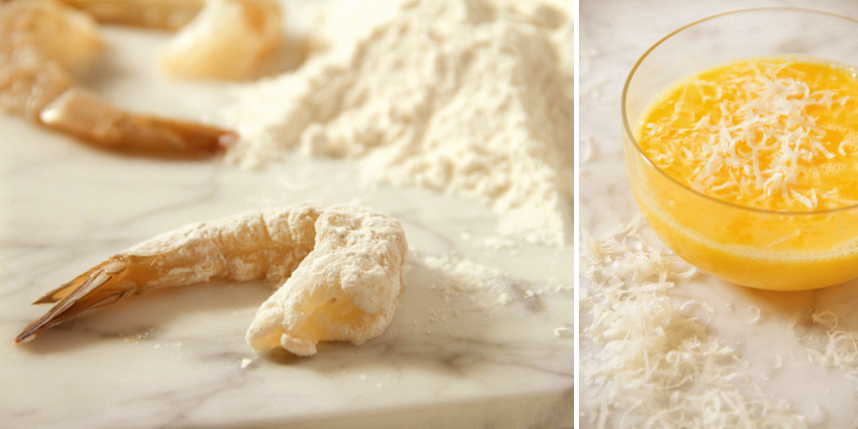 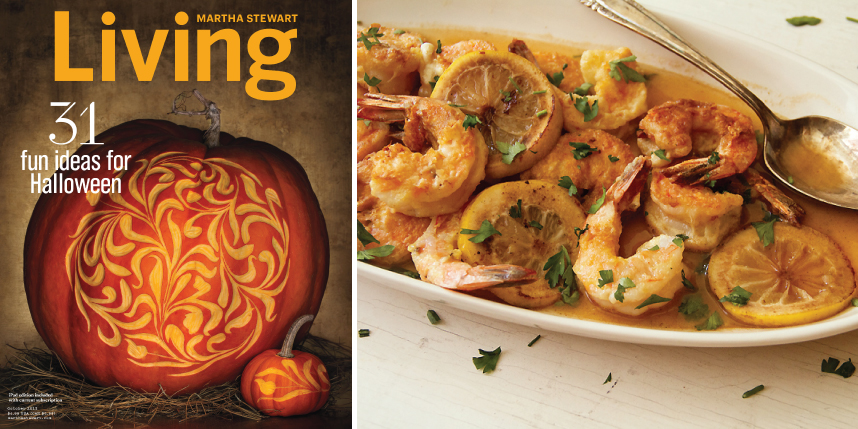 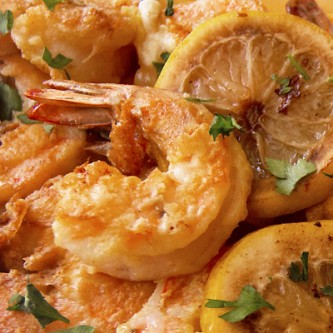 Slice each shrimp along the back to open (butterfly) slightly. Whisk together eggs and cheese in a shallow dish; place flour in another shallow dish. Dredge shrimp lightly in flour, then coat completely in egg mixture.

Whisk together broth, wine, and lemon juice; set aside. Heat a large skillet over medium-high heat. Swirl in oil, then butter. Cook shrimp in 2 single-layer batches, adding more oil between batches as needed, until golden, about 1 ½ minutes on each side; transfer each batch to a plate when done. Pour broth mixture into skillet and cook, swirling skillet, until reduced by half, 1 to 2 minutes. Remove from heat, add lemon slices and parsley, and pour over shrimp. Serve immediately. 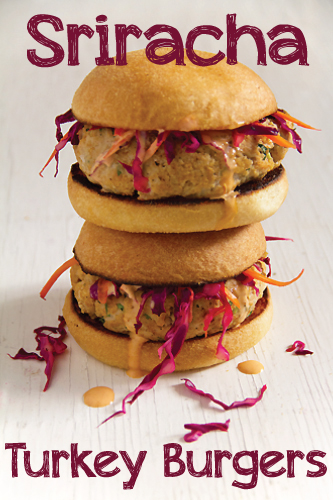 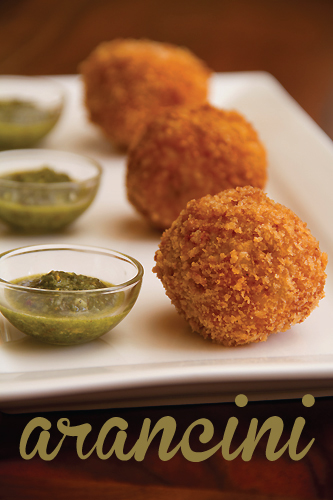