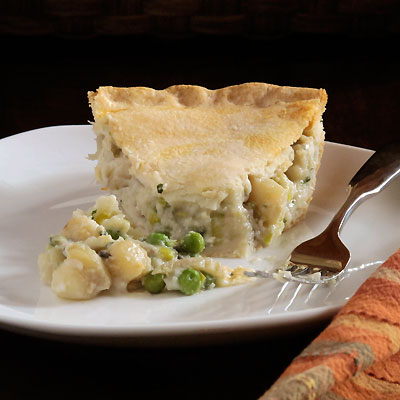 Pie oh my! I have made it to the end of savory pie week. This Scallop Pot Pie is number seven and she’s (he’s??) a beaut!

What (I can hear you asking) have I learned about pie this week? Well, I learned seven days of pie leads to an expanded waistline. I also learned that I’d rather have pie than a skinny butt.

And I got a little closer to discovering the secret allure of pie. But it’s not its flaky, buttery crust (or at least not completely) that keeps people’s pie plates poised for the next bite. There is something else about pie that I had not really considered when I started the week long marathon.

It may seem counter-intuitive, partly because I am food blogger and I spend a lot of time cooking and trying to convince you that you should cook too. So maybe what I am about to say won’t make a lot of sense.

But if I start with the phrase pot pie. Maybe you’ll pay attention long enough that I can make my point.

Sometimes the less effort you invest in cooking the better.  Savory pies are often nothing more than one-pan wonders. Pot pie is especially comforting as a meal all unto itself.

The pleasure in pot pie is that it comes all in one pot (well technically a pie pan). Side dishes, complicated additions and messy stove top preparations really aren’t necessary. Because the true potential of a good pot pie is really centered around simplicity. Well that and time. Giving the pie plenty of time to cook. Time for the texture to come together, and time for the creamy sauce to meld the flavors.

Because like all one-pot wonders, the cooking time of pot pie gently draws out the fullness of all the ingredients. So if you can master good pastry and you have the good sense to step back from the stove and let the simple flavors mingle. There really are no special skills needed.

The same might be said for all pie. And that’s what I learned about pie.

Make the crust: Pulse 2 1/2 cups flour and salt in a food processor until combined. Add butter, and process until mixture resembles coarse meal, about 10 seconds. With machine running, add ice water in a slow, steady stream until dough just comes together (no longer than 30 seconds). Divide dough in half, shape each into a disc, and wrap in plastic. Refrigerate dough for at least 1 hour (or up to 2 days), or freeze for up to 1 month.

Make the filling: Saute the onions and fennel with the butter in a large saute pan on medium heat until the onions are translucent, 10 to 15 minutes. Add 1/2 cup flour and cook on low heat for 3 more minutes, stirring occasionally. Slowly add the stock, Pernod, sea salt, and pepper and simmer for 5 more minutes. Add the heavy cream. Place the bay scallops, frozen peas, and parsley in a bowl. Pour the sauce over the mixture and check the seasonings. Set aside. Assemble the pie: Preheat the oven to 375 degrees F. Roll each the chilled dough disc to fit a 9 or 9 1/2‑inch round by 2‑inch high ovenproof pie plate or baking dish. Place 1 crust in the dish, fill with the scallop mixture, and top with the second crust. Crimp the crusts together and brush with the egg wash. Make a few vents in the top crust and bake for 1 hour and 15 minutes, until the top is golden brown and the filling is bubbling hot. 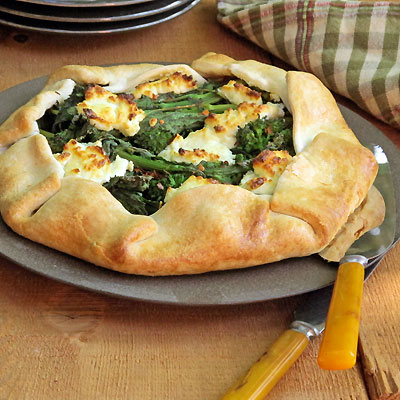 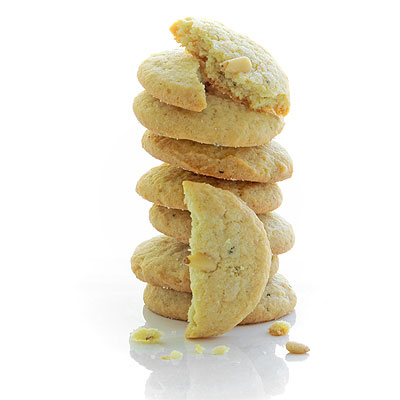