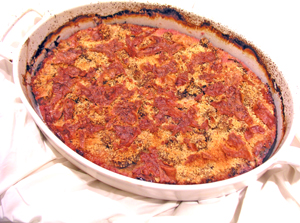 Frilly Red Mustard is the second challenge in my trio of “red” greens. It’s a beautiful little guy. Red and frilly. It has a mild taste. Much milder than the green mustard you know so well.

In my intro blog Red Is The New Greens, I said I’d probably do a salad. Well I probably should have. Instincts are there for a reason. It’s often good to follow them.

I thought about using them raw, paired with some cold left over black-eyed peas and a bacon-vinaigrette. Or something even simpler crossed my mind. I could have tossed them with some avocado cubes and dressed it all with brown sugar and apple-cider vinegar. I have a recipe for a Warm Potato Salad with Wilted Garlicky Baby Green Spinach. One simple substitution and I’d have been home free.

But no, I wanted to show off. I wanted to impress you. In doing so I may have needlessly taken the life of a perfectly sweet little Frilly Red Mustard. Trampling over its delicate, nutty essence. Utterly destroying it’s whimsical form. It was never tough or bitter towards anyone. What right did I have?

I got off-course because I had invited a friend to dinner. I was braising some short ribs in red wine. I needed something to replace the potatoes I did not feel like making. I wanted something rich and hearty. I decided on a gratin.

I made a Gratin of Red Frilly Mustard with Ricotta and Mushrooms. My basic concept seemed solid. A subtle, savory green, supported by earthy, garlic infused baby Bella mushrooms all married in a mild ricotta cheese. Some people call something similar to this Creamed Spinach Casserole and serve it at every Thanksgiving!

But something got lost along the way. So I need your help. Show me where I went wrong? I have a very well hidden comment section on this site. It’s on the home page at the bottom of each post in the same gray bar as the tags. Use it if you have some ideas! You need to be a registered user. But do not worry nothing bad will happen if you join this fray.

I started by thoroughly washing the greens. 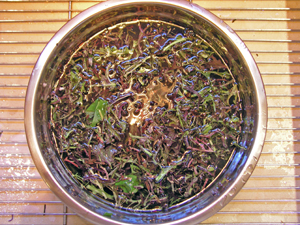 I browned the mushrooms in 3–4 tbsps butter with 3 chopped garlic cloves. I then braised them for 10–12 minutes in a little white vermouth until I had shiny little jewel-like glazed mushrooms. 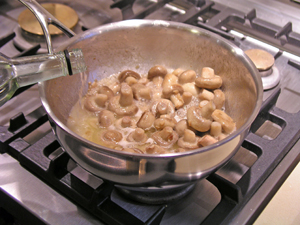 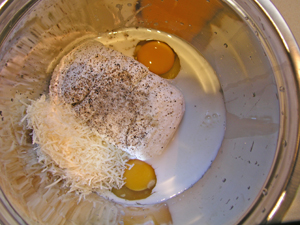 Maybe I should have started with a béchamel mixed with a stronger cheese? But I wanted to feature the mild taste of the greens. I thought ricotta was the answer.

Perhaps the eggs were a mistake? But I was going for a “cheesecake” like consistency so I could make a nice clean-cut portion. I wanted to lay one perfect short rib on top and surround it with the sauce from the ribs.

I topped it with breadcrumbs and a bit of Parmesan, blah, blah, blah… 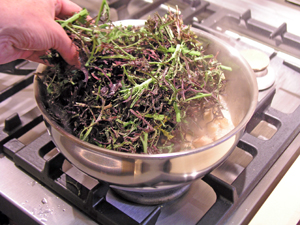 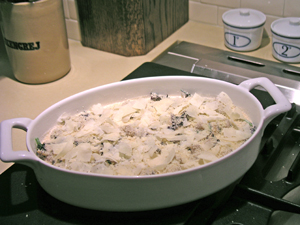 It came out of the oven all golden and crackly.

Do you think the oven was too hot? Or maybe I overcooked it at 30 minutes? It was a little dry. It held its shape nicely (as planned) when I sliced it though.

And it’s not that it tasted bad. It had a certain creamy loveliness that worked well with the braised short ribs and robust red wine sauce. But it was dull, dry and kinda pointless.