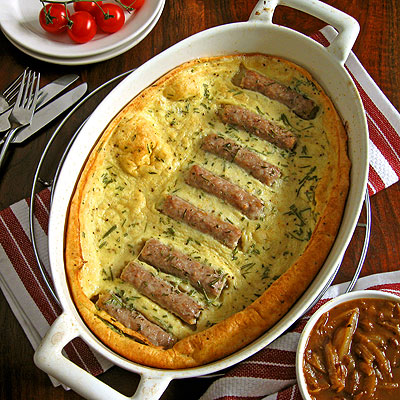 This is an old English favorite, popular in pubs and kitchen for generations. I serve mine with a traditional onion sauce and very non-traditional cherry tomatoes. The bright hit of acid from the tomatoes works nicely with the soft full-mouth flavors of sausage and “pudding”.

Melt the butter in a large cast-iron skillet over medium heat. Cook the onions, stirring, until golden, 10 to 15 minutes. Cover; cook over low heat to very low and continue to cook, stirring often until brown and jammy, about 25 minutes.

Slowly add 1 tablespoon of the flour while stirring and then cook, stirring constantly for 2 minutes. Remove from heat; whisk in the wine, stock, and Worcestershire sauce. Bring to a boil. Reduce heat; simmer until thick, about 10 minutes. Season with salt and pepper. Turn off the heat and let it sit until serving at which time re-heat the sauce.

Preheat the oven to 425Â°F. In a medium bowl, whisk together the eggs, milk, ½ cup water, and mustard; season with salt and pepper. Whisk in the remaining ½ cup flour. Let stand 20 minutes.

Coat a 13 x 9‑inch or 3 ½‑quart baking dish with the oil; heat in the oven 10 or 15 minutes, until smoking hot. Remove from the oven. Pour the batter into the dish. Arrange the sausages on top; sprinkle with rosemary. Bake until puffed, 25 to 30 minutes. Serve immediately with gravy and some (optional) cherry tomatoes on the side. 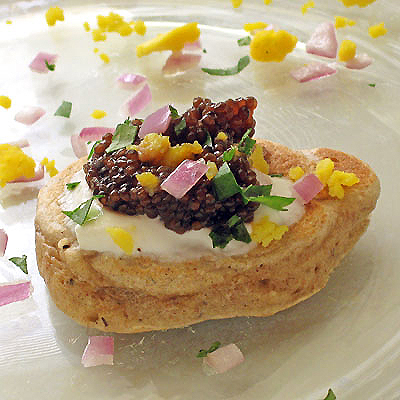 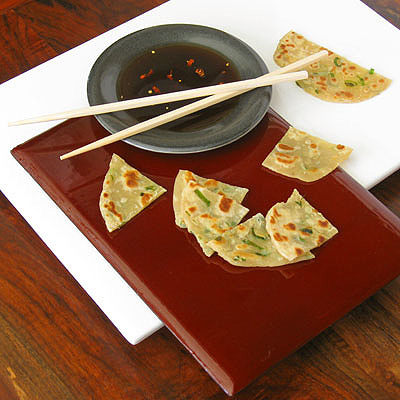