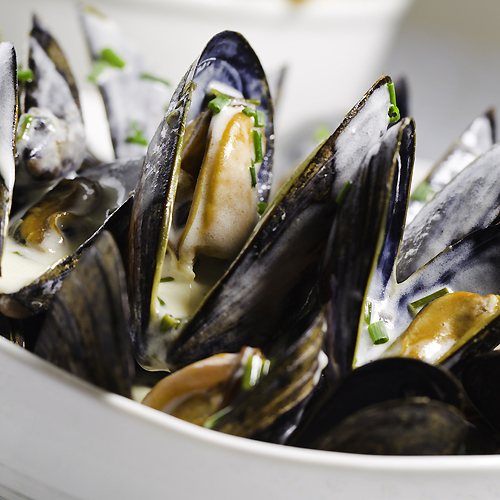 Steamed mussels for moules frites are a classic French bistro dish and easier than you may think to make. 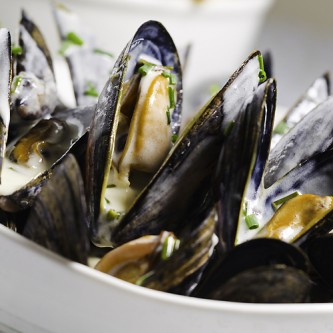 Prep the potatoes: Scrub the potatoes, peel them if you like (I don’t), then slice them lengthwise into slabs, 3/8 inch thick. Cut the slabs lengthwise into 3/8‑inch batons. Place the cut potatoes in a bowl filled with cold water to rinse off some of the excess starch and prevent discoloration. Potatoes may be cut up to a day in advance if they are left in water and stored in the refrigerator.

Prep the mussels: Rinse the mussels well. Discard any that remain open when tapped, then pull off any ‘beards’. (Fresh mussels look shiny and should only smell pleasantly of the sea– the vast majority should be tightly closed. Avoid any that smell ‘fishy’, look dry or are mostly open.)

Keep the mussels in a colander in the refrigerator until it’s time to cook them. Mussels can be cleaned up to an hour before cooking.

Make the sauce: Pour the white vermouth into a deep, 4‑quart, nonreactive saucepan over high heat and boil until the liquid is almost completely evaporated; add the cream and boil the liquid again until it is reduced by half. Stir if necessary to prevent it from boiling over. Meanwhile, split the fennel bulb in half lengthwise, remove the core, trim off the leafy end and reserve for another use. Slice the bulb into ¼‑inch slices. Add the sliced fennel and garlic to the reduced cream, bring it back to a boil; turn off the heat and set aside.

Give the potatoes their first fry: Preheat the oil in a deep fryer (or tall, deep sided stock pot) to 325 degrees. Line a sheet pan with paper towels to absorb the oil from the cooked potatoes. Pour the potatoes from their water filled bowl into a colander then pat them completely dry with paper towels. Fry the potatoes in several batches to avoid crowding the oil, stirring them to distribute evenly in the oil until they just begin to turn golden, about 4 to 5 minutes. Move the par-cooked potatoes to the paper towel lined sheet pan and let them come to room temperature, at least 10 minutes and up to an hour before serving time. Raise the temperature of the oil to 375 degrees.

Cook the mussels: Bring the cream sauce back to a boil over medium high heat; add the mussels, cover the pan and cook, shaking the pan once or twice until they begin to open; about 2 minutes. Remove the lid and shake the pan again. Pour in the wine, shake and cook for another 2 minutes or so until the wine reduces some. Cover the pan, remove from heat and set aside.

Give the potatoes their second fry: Working with about half the potatoes at a time, fry in the 375 degree oil until golden brown and crisp, about 4 minutes. Drain them on a paper-towel lined baking sheet; toss with kosher salt.

Pour the mussels and all the broth into a large bowl; garnish with chives. Serve in individual bowls with the frites on the side.