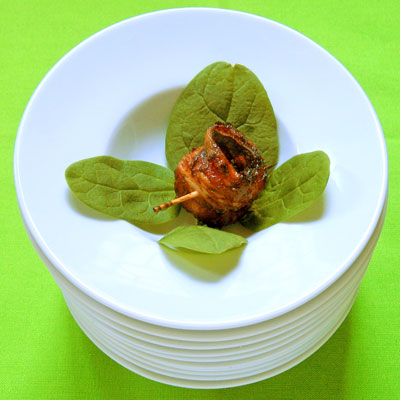 To understand the story of Rumaki we need to look to Don the Beachcomber where it first appeared on their menu in 1941. To understand Don the Beachcomber we need to go all the way back to a time shortly after prohibition. A small town schoolteacher (with big ambitions) from Minnesota spent her life savings to relocate herself to California. Her name was Cora Irene Sund.

Once she arrived in sunny L.A. she got herself a job as a waitress at the Tick Tock Tea Room, another classic restaurant of old Hollywood. But Cora was party girl, and Tea Rooms just did not suit her! She became a part of the cocktail circuit in Hollywood and one of her favorite bars was a tacky little Tiki Bar located by the pool of one of the more downscale hotels in Hollywood. There she met a bartender who used the fictional moniker of Don the Beachcomber to ply exotic rum drinks on tourists.

Well, Cora was a party girl, sure, but she was an astute businesswoman too. She soon left her waitress gig, changed her name to Sunny Sund and borrowed enough money to make improvements to “Don” little poolside bar. She and “Don” went into business together and she named herself president of the small business venture they formed. A wedding between to the two soon followed!

From the very beginning they attracted a Hollywood crowd. From the street the place was hidden in a thicket of bamboo and difficult to find. Difficult to find soon came to mean, if you didn’t know where it was you didnâ€™t belong. To add to the allure they enshrined the chopsticks used by notable diners such as Groucho Marx, Bing Crosby, Marlene Dietrich and Greer Garson in glass case!

They hired Chinese cooks and asked them to create imaginative hybrids of Cantonese/Tropical dishes. One of the most popular menu items was Rumaki! Rumaki was described as an appetizer made with water chestnuts and chicken livers wrapped in sarong of bacon. Just the thing to accompany Don’s creative but intoxicating slew of colorful rum drinks.

Their business was a huge success; their marriage however failed miserably. They were divorced by 1940. But they remained partners in business as they opened Don the Beachcomber restaurants in Palm Springs, Chicago, Marina del Rey, Newport Beach, and at last, finally Mecca–Waikiki Beach. When it came time to retire J. Ronald Getty, son of J. Paul Getty bought the chain about 1968. Eventually the concept felt dated and the restaurants fell out of favor. But Rumaki lives on and remains the ultimate party food!

Remove pan from the heat and move the chicken livers to a plate and let them cool. Keep the sauce in the pan and set it aside. Once cool enough to handle cut the livers into chunks about the same size as the water chestnuts.

Lay one slice of bacon on a work surface in front of you. Place a water chestnut and a piece of liver at the end of the piece of bacon. Carefully roll the bundle until encased in the bacon. You will probably only use a half piece of bacon. Trim the bacon at that point. Use a tooth pick to secure the opening making sure to pass it through both the water chestnut and the liver and back through the other side of the bacon. Use the other half of the bacon for the next rumaki. Repeat with the rest of the pieces.

One at a time return the rumaki to the pan holding the sauce. Carefully roll each rumaki in the sauce until it is well coated. Lay the rumaki bundles as you finish each one on a parchment lined baking sheet. Bake in oven for 20 minutes until well browned and crisp. Serve warm. 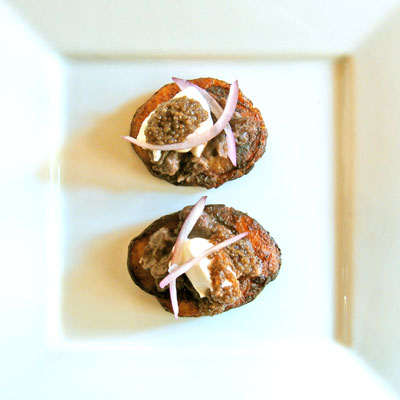