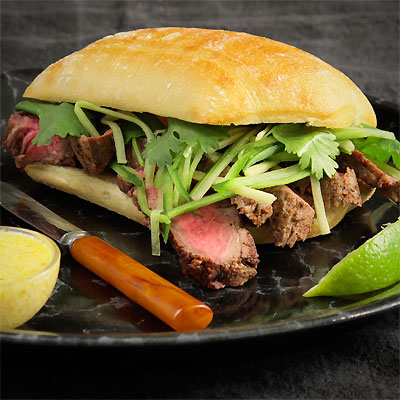 Forget the onions. Skip the cheese. This is a lighter brighter steak sandwich with cucumbers and fresh ginger, made as spicy as you like with a fiery ghost chili ailoli.

In a small bowl cover the chili with very hot water. Let sit about 1 hour until softened. Discard water, dry the chili, remove the seeds (optional) and roughly chop it. Be careful as this chili is very hot.

In a blender, add egg yolk, egg, lemon juice and chili (these little peppers pack a lot of heat, so add as much as you can stand). Blend until fairly smooth. While the blender is on, drizzle in canola oil until the aioli emulsifies and thickens to your liking (you might not use all the oil) then add a pinch of salt to taste.

Season the meat on both sides with salt and pepper. Heat the olive oil in a large cast-iron skillet set over high heat, until very hot. It must be an iron skillet to retain as much heat as possible.

Place steak in the hot pan. Let sear for 2 to 3 minutes until well browned. Flip to the other side and let sear for 2 to 3 minutes. Remove the pan from the heat and let the steak continue to cook for 5 to 10 minutes. Insert a meat thermometer into the thickest part of the steak. 120°F for very rare, 125°F for rare, or 130°F for medium rare. When the desired temperature is reached, remove the steak from the pan to a cutting board and let rest for 10 minutes. Thinly slice the meat against the grain.

Slice the ciabatta rolls in half, scoop out some of the soft interior bread, creating a well. Spread some of the ghost pepper aioli onto the top halves of the rolls. Layer the sliced meat on the bottom halves of the rolls followed by a generous amount of the cucumber, ginger and cilantro. Drizzle with lime juice. Close the sandwiches and serve with more aioli and lime wedges. 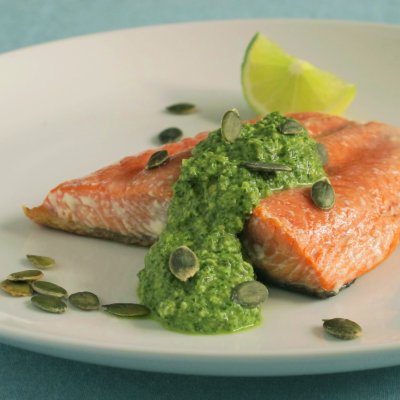