Not My Mother’s Scalloped Potatoes 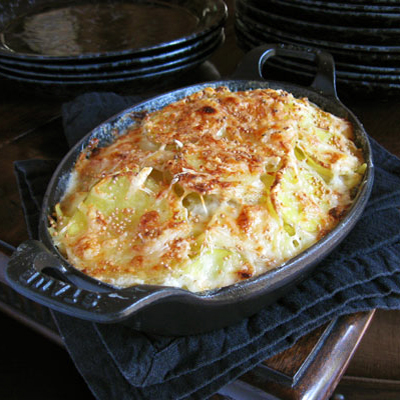 If it rains, it will probably be all the appreciable rain we will see until next October. Thatâ€™s how it is in Los Angeles, which is technically a desert. A paved over and re-planted desert, but a desert nonetheless. So we still retain the desert-like predictability of very long dry spells.

In honor of the last of the rain of the season, I am going to make something cozy. Something my mother might make.

Now I just have to decide which gentlemen to invite. But thatâ€™s a problem for later.

Right now I need to plan a menu.

And let’s not forget. My mustard is still blooming. So I am still featuring mustard recipes. If this rain comes through it will probably knock down the last remaining blooms, which will bring a dramatic close to all things mustard here at SippitySup. But weâ€™ll just have to wait and see about that. 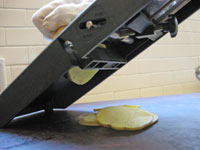 When someone says “warm and cozy by the fire with mustard”, I immediately think â€œgratinâ€. My mother would say scalloped, but she and I would be thinking the same thing. Besides when Chef E (my other Mother) suggested a gratin in yesterdays comment section, bells went off!

I am going to a do a very straightforward version with potatoes, gruyÃ¨re, cream and of course mustard (2 ways). A little grainy mustard in the cream sauce and some whole mustard seeds sprinkled whole all over the top for a nutty burst of heat in the crusty bits. Yummy!

This gratin starts with sliced Yukon gold potatoes. Yukon Golds have a thin and tasty skin, plus I am going to slice them very thin. So I do not think peeling the potatoes is necessary, but you can if you want to. My mother would… 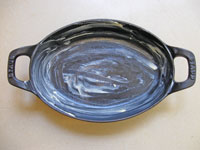 I often mention here that I am a fan a multiple textures in foods. I like to explain techniques that help you achieve this.

However, in a scalloped potato gratin I want 2 textures and 2 textures only. These are creamy potato and crackly crust. To help assure all the potatoes cook at the same rate and maintain a consistently creamy texture I am going to recommend that you slice the potatoes at a very uniform thickness. Just under 1/4 of an inch thick. To keep the slices uniform, I suggest you use a mandoline. My mother would…

Simmer the potatoes in half milk and half water for a couple of minutes. You want to 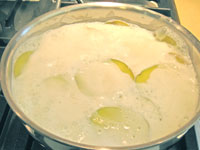 soften them somewhat, but not cook them all the way yet. Cooking the potatoes in milk adds a certain rich softness. I think it must tame the starch somewhat.

The cream sauce is made with cream and some of the milky water you cooked the potatoes in, plus a good amount of a slightly grainy mustard.

Line the potatoes in a buttered 10″ x 7″ baking dish in three or four layers, adding a dusting of flour and a sprinkle of gruyÃ¨re cheese between each layer. Remember to save half of the cheese for the top. I told you I expect a crunchy crust and that comes from the cheese. 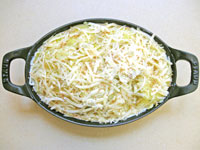 After the gratin is all assembled pour the mustard cream sauce over it until the liquid comes about halfway up the sides of the pan. Then add a healthy sprinkling of whole yellow mustard seeds. But I doubt my mother would…

Bake this guy for 30 minutes at 325 degrees.  Put a tray underneath, because it could bubble over. Donâ€™t you love that phrase bubble over? Ohhh, I am getting excited!

When it comes out of the oven stick it under a broiler for a few minutes. Watch it closely, and turn the pan often to assure a good, even, brown, crunchy crust. Everyone’s mother would do that!

Thatâ€™s it! Serve it while itâ€™s hot and bring on the rain! 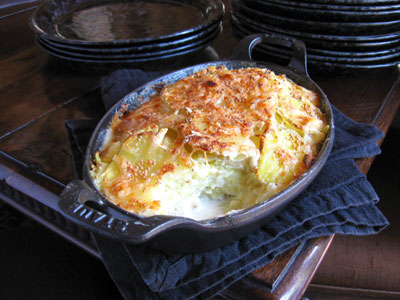