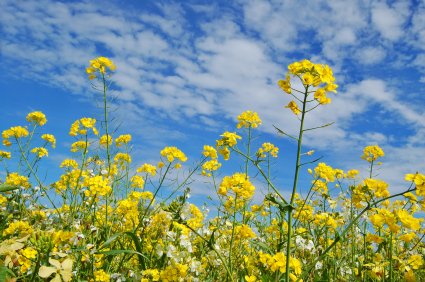 This morning I had a particularly spectacular walk in the hills near my house. It was such a typically spring Southern California morning. Which means a touch of what some people erroneously (even on the news) call fog.

But really it is called a marine layer, or inversion layer. If you live anywhere near a very large body of water you probably know what I am talking about.

Here in Los Angeles the inversion layer is particularly pronounced in spring. Some call it May Gray or June Gloom. But these are rather dreary monikers because this morning “fog” has it’s own special charm I think. Partly because you can count on it “burning off” by lunchtime and leaving you with some of the prettiest blue skies LA is capable of producing.

But what I really like best about these mornings is the special kind of “hush” that falls over the city. I don’t mean hush like quiet. LA is never quiet. There is always a certain low buzz or hum that permeates the atmosphere (11 million people are incapable of producing complete silence). But there is a gentleness in the atmosphere that envelopes everything. 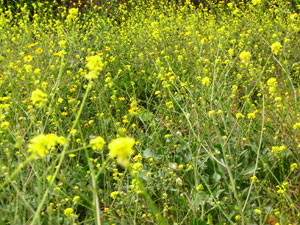 I think the creatures that share these hills with me feel the same way on these hushed mornings.

Today I saw a deer. Which is not that unusual, but this deer may have felt protected and enveloped just the way I did. Because she did not dart off as is usual. She stopped what she was doing and observed me.

These moments of hushed solitude are a good time to become an observer yourself. The quality of light is so special. Colors really pop. Especially yellow.

Sometime in the last week or so the wild flowers started their annual show. The stars of the show around here are mustard blossoms. The hills positively radiate bright sunny yellow. Bursting through the morning haze and creating vividly lush vistas. 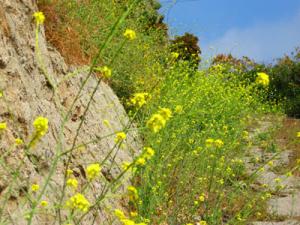 Which got me thinking about mustard as an ingredient.

Mustard was originally introduced to Europeans as a substitute for black pepper. Black pepper is a tropical plant. It was difficult and expensive to get pepper to Europe in those days.  Mustard is far better suited to mild weather and was planted for it’s seed. In the beginning these seeds were crushed and used dry in a similar manner to that of black pepper. It delivered a punch of spicy heat.

But around 1390 the French City of Dijon began regulating the production of mustard in the classically French “Appellation d’Origine Contrõlée” (A.O.C.) manner. The law mandated that mustard be ground to a paste and mixed with vinegar for at least 12 days. Mustard became a regional specialty de Dijon.

Though recipes have changed somewhat and mustard is now made 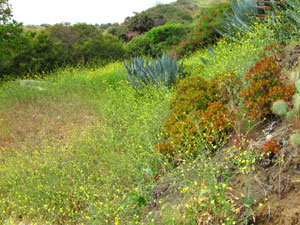 all over the world. Dijon mustard has retained many of the qualities that have defined it for centuries.

I am going to honor Dijon mustard and its French roots. For the next few days, I will be posting several recipes that highlight the condiment and its clean sharp taste.

When you see a recipe calling for mustard which mustard should you choose? A creamy Dijon is the purest of mustards and is a good choice for most recipes and should be used as the benchmark.

But there are other good French mustards as well. The Bordeaux variety is sweeter and relies on herbal flavors to give it some distinction. It has sugar added and often contains verjus, which is the juice of unripe grapes. It can contain a variety of different herbs, but is typically made with tarragon. 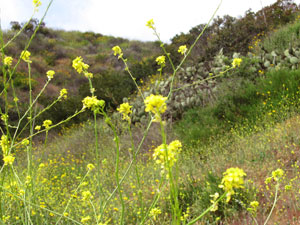 There is also a grainy style of French mustard that is referred to as à l’ancienne, or “old fashioned” mustard. In this preparation the seeds are coarsely ground leaving the mixture with a granular texture.

The French mustards often have a complex variety of flavors. But the British prefer no-nonsense mustard.

English mustard is made with dried mustard powders mixed with water to form a paste.  In it’s undiluted form it is a hot, teary-eyed condiment of intense mustard flavor. It is traditionally slathered onto roast beef and ham and is very true to the general straightforward style of British cooking.

Whether you prefer simple bold mustard or a more nuanced mustard one thing remains constant. Mustard adds a certain zip to a recipe. 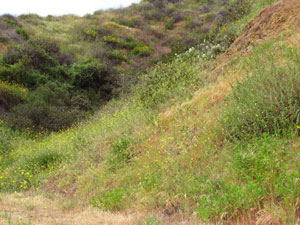 When working with mustard in a recipe remember to add it near the end of the cooking. Heat nullifies its spiciness and is one reason mustard is considered a condiment much more than an ingredient. But these are just guidelines. Understanding a product helps you understand when to follow the rules and when to break them.

First up tomorrow: a breakfast dish highlighting mustard in a sauce. This sauce is a good alternative to a hollandaise. It has all the same rich luxury as the original with out the butter. Plus it has the added punch of good fiery mustardiness!