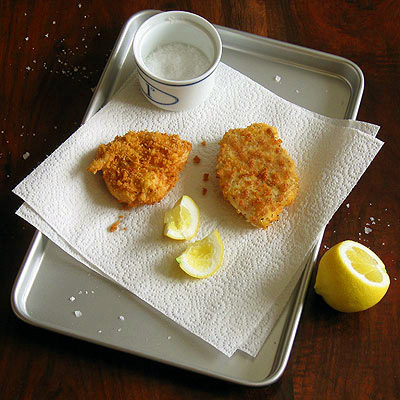 Now, I’m not Jewish. But around my house we like to say I am Jewish adjacent, that’s because my partner is Sephardic. The differences between Sephardic Jews and Ashkenazi Jews are partly cultural and partly religious. These two branches of Judaism separated at one time by geography still retain some of their distinct traditions.

Language is one big difference. Yiddish is the language of the Ashkenazi. As Sephardics Ken’s parents grew up with parents that spoke Ladino, a sort of Judeo-Spanish derivation used by Jews of Hispanic origin. Ladino did not become specifically a Jewish language until after their expulsion from Spain in 1492. Yep the same year that Columbus “sailed the ocean blue”.

Now I am not just spouting all this to impress you with my knowledge of the Jewish religion, what I don’t know about Judaism could fill a stadium. I am just trying to make a point about the interconnectedness of life and the world and even history.

Because as school children we learn all about Columbus and his grand voyage, we glamorize the Spanish monarchs Ferdinand and Isabella. But 1492 is also a year of unspeakable human cruelty as tens of thousands of Jewish refugees died during this forced evacuation of Spain. 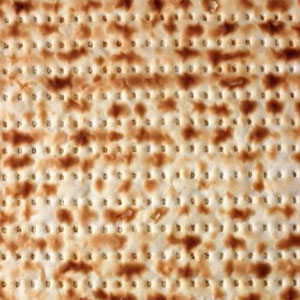 Of course all of this has little to do with food or even Passover. But like my blended household I find it interesting when cultures, religions, races, sexual orientations, heck even genders live and work together, because by celebrating our differences we highlight our interconnectedness.

So today I bring you a Matzo-Crusted Chicken Breast, which I adapted from Martha Stewart Living. Now I am not saying this is a traditional meal of Passover. I may even be treading on some rabbinic traditions with my little recipe, if so forgive me and look to my intentions. I am trying to blend the traditions of Passover with the way my not overly religious Jewish/Christian household operates in the modern world. It’s my nod to the past, with both feet in the present.

Passover is probably one of the best known of the Jewish holidays, mostly because it ties in with Christian history. The Last Supper was apparently a Passover Seder, because let’s not forget Jesus was Jewish.

Passover begins on the 15th day of the Jewish month of Nissan (which is tonight at Sunset). The primary observances of Passover are related to the Jewish exodus from Egypt after 400 years of slavery. The name “Passover” refers to the fact that God “passed over” the houses of the Jews when he was slaying the firstborn of Egypt.

Probably the most significant observance related to Passover involves the removal of chametz (leavened wheat, rye, barley, oats and spelt products) from Jewish homes. This symbolically represents the fact that the Jews had to leave Egypt in a hurry; without enough time to even let the bread rise that they would be taking on their journey. 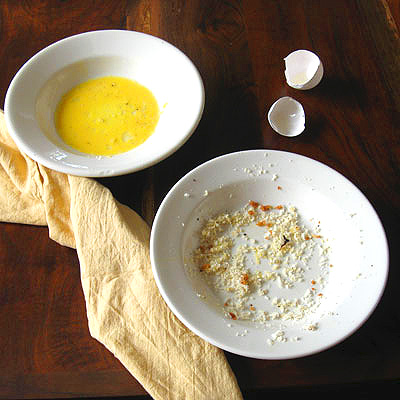 Matzo is the bread associated with Passover because it is unleavened. It has come to represent the bare essentials– Matzo is the symbol for simplifying life to appreciate what freedom really means.

Matzo at Passover is a substitute for flour or pasta, so in my recipe that’s exactly how I used it. I replaced breadcrumbs with pulverized matzo “crackers”

But matzo has a place in non-holiday cooking as well. In English-speaking countries, where the Ashkenazi culture dominates, matzo balls and matzo farfel are widely used in soups and as pastas, as well as matzo meal being used in baked goods such as cakes. Matzo brei is another popular dish of Ashkenazi Jewish origins made from matzo fried with eggs.

In Sephardic cooking, matzo is soaked in water or stock and used as a substitute for phyllo or lasagna noodles to make pies known as mina. A sort of pancake, made from matzo meal (powder ground matzo) egg and milk and fried is also eaten as a substitute to normal pancakes, both during Passover and at other times as well.

So that’s what I know about Passover and matzo! It’s not much and most of it I picked up from the Jewish Virtual Library. But that’s not the point– because Jewish or not, Passover or no, it’s fun to spend a little time in another man’s shoes. Food traditions are a great way to do just that. Besides this is a tasty recipe that I know you would enjoy. 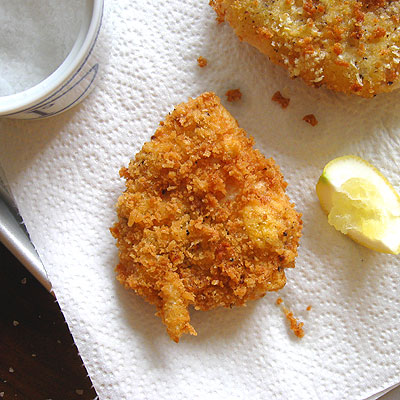 Place the crushed matzos into the bowl of a food processor fitted with the metal blade. Pulse the machine 8 or 10 times to achieve the consistency of course sand.

Beat the eggs in a shallow dish. Mix the matzos, salt and pepper in another small dish. Heat 1/2″ of oil in a large cast-iron or not stick skillet to 375 degrees F (use a deep-fry thermometer).

Be sure that the chicken is at room temperature so that the matzo adheres. Working one at a time, dip chicken into the egg, then into the matzo mixture, pressing as needed to assure that the matzo sticks to both sides. Immediately move the chicken to the hot oil. Repeat with a second breast, and cook until golden brown about 2–3 minutes per side. Transfer to a paper towel lined tray to drain. Spritz the cutlets with lemon wedges while they are still very hot and season with a little salt and pepper. Repeat process with remaining chicken. Serve immediately with more lemon wedges. 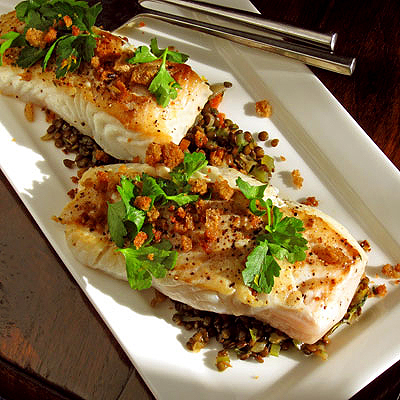 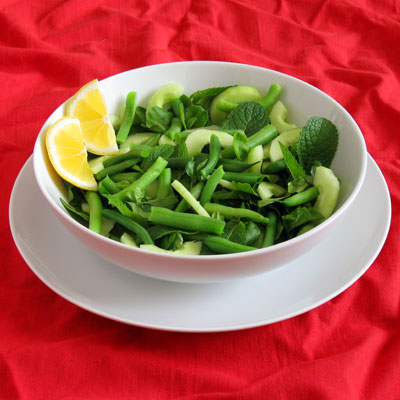