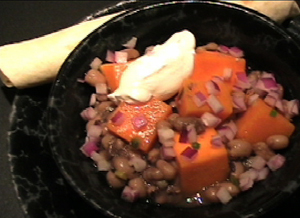 The local California Farmer’s Markets are featuring an interesting and gorgeous array of fresh dried beans right now. Lots of beans can be found year round here in Southern California. But certain heirloom varieties are much more seasonal and it’s worth being on the look out for them at the Farmers Markets.

One of these beans is a tepary bean. It’s a Native American heirloom. In fact it’s the only truly native bean to North America. Which makes it particularly interesting to me.

Tepary beans were a dietary staple of the Native Americans living in The Sonoran Dessert. Along with corn and squash it is considered one of the “Three Sisters” and was one of their major sources of protein and digestible carbohydrates. With the loss of their Native lands and cultivation practices the tepary bean was nearly lost as a species. But it was rediscovered growing wild in Arizona in the 1980’s. And lucky for you (and me!) these delicious, beans are experiencing a veritable vegetal revitalization!

So when I saw some from Windrose Farm at the Farmers Market this week I bought 5 or 6 pounds.

Now that may seem like a heck of a pile of beans. But fresh dried beans store very well. And that’s just what I plan to do.

The tepary beans I picked up were California grown and harvested in October of this year. They have been through a drying process and are available for a few weeks in December at several of the Farmers Markets in Southern California. I know they can be found at the Santa Barbara Market too. If you can’t find them at your local Farmer’s Market try an online source like Rancho Gordo.

Nevertheless, the information I am going to pass along is good for any of the “fresh dried” beans you see at the markets this month. Black Eyed Peas, Black Beans, Borlotti, Cannellini, Mayacobo, Flageolet, Pinto etc.

Like I said I picked up several pounds of Tepary Beans, both the brown and the white. If you are unfamiliar with tepary beans, seek them out. They are small, like a lentil.  But otherwise, nothing like a lentil.  They are meaty and dense. They are higher in protein and fiber than most other beans. Which is saying something.

The brown variety has a deeply savory quality, while the white have a lighter, honey-like quality, but still savory and delicious.

To be honest they are not easy to find at the market. I have only seen them in December here in Los Angeles. So to feed my need all year long I like to freeze the beans in individual freezer bags (2 or 3 cups per bag).

They freeze terrific. Now, these beans are dried so you could stick them in your pantry and forget about them. They will be fine to eat for years maybe. But by now you must realize, “fine” is not so fine by me.

I want to maintain them in the best possible condition. Dried beans actually continue to dry if left in the pantry and will slightly degrade. Not just in quality either, but an old dried bean takes longer to cook, tends to break down during cooking, and can have a slightly mealy texture. Freezing keeps them at their peak much longer.

Now, I can’t say I never buy dried beans at the grocery store.  But when I do I often wonder how long they have been sitting around the processing plant, the warehouse, or my grocer’s shelf. This explains why dried beans can be so unpredictable to cook. No matter what the recipe says you can never really know how long to cook them.

And here’s another conundrum. There is a lot of mis-information out there about cooking beans. Contrary to popular opinion, beans do not need to be soaked overnight. While it true soaking speeds up their cooking time, the real question is why would you want to speed up their cooking time?

Beans benefit from a low and slow cooking process. Dried beans cooked with out pre-soaking take longer, yes, but they produce a much more flavorful broth.

A general way of cooking most any dried bean is this. Put them into a cast iron Dutch oven and cover them with plenty of water. I bring the water level about 2 inches above the beans themselves. You will read that beans should be salted late in the cooking process. Hogwash! A pound of beans should be salted with about 1 1/2 teaspoons good salt before you cook them, and then more salt to taste at the end as well.

Next I put the salted beans onto the stove top and bring them to a low boil. I usually add other flavor ingredients at this point. Anything pig is good, but so are peppers (fresh or dried), and of course herbs. Really whatever you like. If it’s lentils I often add diced carrot and celery, sometimes, red bell pepper.

Once they come to a low boil, put the lid on and stick it into a 300-degree oven. A pound of “fresh dried” beans will take about an hour and a bit more. Questionable quality grocery store beans may take up to 2 hours. Tepary beans are dense and tend toward longer cooking times even when fresh. So it’s best to check by tasting one for doneness.

You notice I suggest cooking beans in the oven. Almost every recipe I have seen says to simmer them on the stove. But beans not only like a low and slow cooking process they like as consistent a cooking temperature as possible. The cast iron pot enhances this consistency because it absorbs and retains the heat in a very dependable manner.

When you cook beans on the stovetop the heat radiates upwards from the bottom of the pan so the beans at the bottom get more heat than the beans at the top. To compensate for this you need to remove the lid causing further heat fluctuations and stir frequently. Frequent stirring causes more of the beans to break up and get mushy. A good Tepary bean has a meaty texture and is not at it’s best when served mushy. The oven alleviates these two problems!

I also try and avoid adding more water to the pot as the liquid gets absorbed into the beans. Adding water during cooking is a bad idea for several reasons. Adding water causes heat variations which mess with the texture of the final product. Besides it’s only necessary if you added too little water in the first place, have a poor fitting lid, or opened the pot too often. Err on the side of too much water and you will be rewarded with a rich, earthy broth. Adding water late in the process leaves you with watery beans.

The other thing I always do with beans is to make them ahead of time.  I then let them cool in their broth before re-heating and serving. Osmosis is a powerful friend when used properly!

So, you may be wondering what I am going to do with my beans… Well, I think I am going to make a stew reminiscent of this bean’s American desert roots. Tepary Bean Stew and Butternut Squash, flavored with a few smoky chipotles. The chipotles are a good idea because it’s mighty hard for me to resist cooking my beans with bacon, or pancetta. But I am having dinner with a vegetarian friend. We plan to take the dogs on a good long hike in the canyon first. The weather is brisk, there is rain in the forecast… and there are beans in the oven. Yes, indeed I am a happy man.