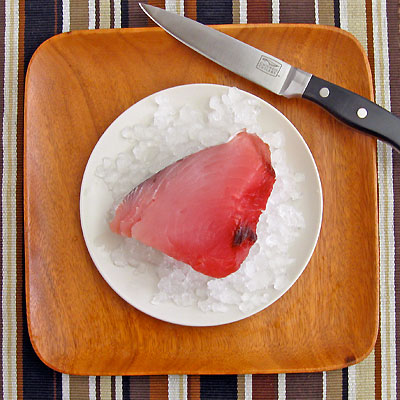 I was recently treated to an amazing meal at McCormick & Schmick’s as part of a blogger appreciation evening. And I gotta say it’s this blogger who really should be telling Mc & Schmick’s just how much I appreciated that wonderful meal.

Because we were wined and dined on nine amazing courses (plus an amuse bouche!) as well as sake and 7 appropriate and thoughtfully paired wines!

There was so much to enjoy about the evening, including the company of other LA area bloggers – some of whom I had met before as well as several new friends too. So again, my appreciation goes out to the restaurant because meeting my web-based, food-obsessed kindred is always a great way to spend the evening in my opinion.

However what I am most appreciative of is the learning experience the evening presented to me. Yes, I said learning. I doubt they considered that this to be an educational affair, but it certainly was for me. I was introduced to a new fish, one I had never enjoyed before. The fish was part of the second course, which was a trio of creative sashimi tastes.

One of the selections was called Kono Kampachi Sashimi with Avocado and Truffle. It was a luscious fatty fish served with fresh avocado slices simply dressed with a drizzle of soy sauce and a few aromatic drops of truffle oil. I must say– truffles and fish is a new experience for me. So I filed that information away, and made the trek home– fat and happy! 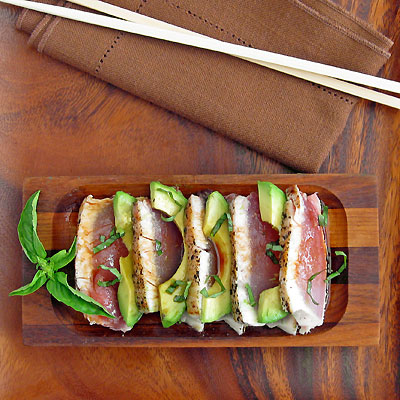 The next day I got I touch with the Mc & Schmick’s representative who arranged the evening and inquired about getting the recipe. I was a little nervous asking because these things can be a bit proprietary. But they happily gave me the recipe. As a matter of fact, they also gave me a cookbook or two! A set for me to keep, and a set to giveaway to one of you. So leave a comment before 10 pm Friday, August 20 and you’ll be entered into a drawing to win a set of these books. I’ll have a “live” video drawing here on Saturday, August 21. See the books and get more information about the drawing on my Sippity Sup Facebook Page here.

As I was saying, I had never heard of Kona Kampachi so I went straight to the Internet to find out what I could. Well, it turns out Kona Kampachi is a highly sustainable alternative to Yellowtail. I was ecstatic! As you may know, keeping you informed about the state of the world’s oceans, and the need to educate ourselves about the crisis that overfishing and environmental degradation is bringing to many of the world’s fisheries is a priority to me. I have posted about it many, many times.

So I began a bit of research, I quickly found out that Kona Kampachi is the farmed variety of the wild fish Seriola rivoliana, otherwise known as known as Almaco Jack or kahala, but Kona Kampachi is substantially different from its wild counterpart. Because it is nurtured through its entire life cycle from hatch to harvest, yielding one of the healthiest and most delicious fish on the market today.

Well, armed with this knowledge I immediately fired off an email to Kona Blue, the company that is farming this responsible alternative to yellowtail and bringing it to “sushi bars and white-tablecloth restaurants in the Hawaiian Islands and on the U.S. Mainland”. I have even read that the fish is often available at Whole Foods.

Well, I should say (more accurately) that it was occasionally available at Whole Foods and perhaps restaurants near you. Because as an illustration of Kona Blue’s dedication to the concept of keeping their product sustainable, they have temporarily stopped harvest of their fish. They made this difficult decision because they are true to their core beliefs. They did it to keep their product at its best and to assure its continued sustainability.

So what I am trying to say is I could not get my hands on any Kona Kampachi so I have had to alter McCormick & Schmick’s recipe to suit what I could get my hands on. 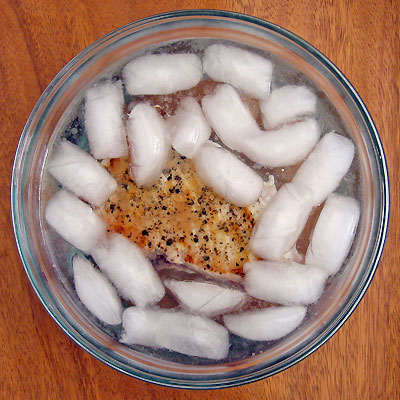 Which brings me to my Market Matters from the Hollywood Farmers Market choice for this week. After learning about all the terrific lengths Kona Blue is going through to keep their product delicious and viable I just had to choose a sustainable variety of fish for this recipe. The only Yellowfin to earn a “Best Choice” rating from Seafood Watch is troll or pole-and-line caught Atlantic Yellowfin. Well, my local Farmers Market only carries fish sourced much closer to home. That means the Pacific. So I decided to re-imagine this dish using Pacific troll or pole-and-line caught Albacore Tuna.

Now, I love Albacore. It’s a lighter fleshed fish than many of the tunas you associate with sushi, but its texture makes it less than ideal for sashimi in my opinion. So I have decided to alter the McCormick & Schmick’s recipe so that I can present this Albacore at its very best. Its very best to me means seared. Now searing fish to a nicely caramelized exterior and a perfectly rare interior has often been a challenge to me. But I am happy to say that I have finally mastered the technique. It’s the same technique you use to keep your green beans green and crisp after boiling. That’s right, the secret to a well seared but rare piece of fish is an ice water bath! Simply plunge it in after it leaves the pan to stop the cooking…

Adapted from a recipe by McCormick & Schmick’s 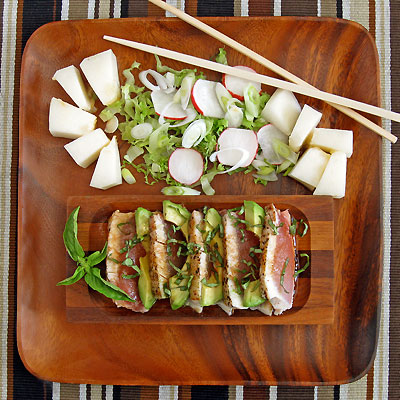 In a medium-sized bowl prepare an ice water bath. Set it aside. Wash and thoroughly dry the albacore. Rub a pinch of salt and a very generous grind of black pepper on each side.

Heat a cast iron or non-stick skillet over medium-high heat, until very hot. Pour a small amount of oil the skillet. Sear the albacore for about 1 to 1 1/2 minutes per side.

Remove albacore and immediately submerge it in the ice bath for about one minute. Remove the fish and thoroughly dry it. Using a very sharp knife cut the fish diagonally across the grain in slices about 1/3‑inch thick.

Arrange the fish and avocado slices alternating on a serving plate. Drizzle with the soy and truffle oil and garnish with basil. Serve immediately. 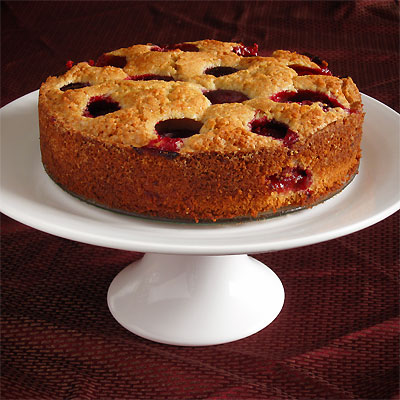 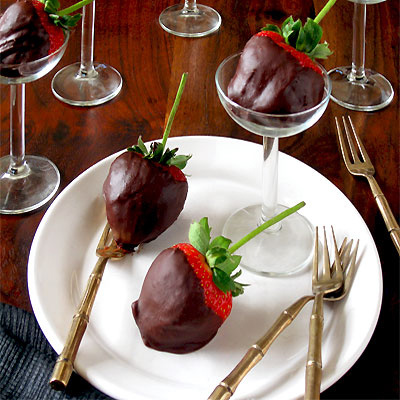