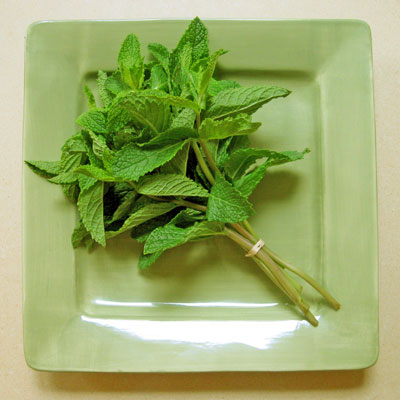 I bought mint. And not just 1 kind of mint, I bought 5 kinds! But that is nothing. There are sixteen varieties of the genus Mentha, which we lump together and call mint.

Naturally I wanted all 16 varieties, but the market only had 5.

Still thatâ€™s a lot of mint. So you know what that means donâ€™t you? Thatâ€™s right I will posting nothing but mint until I feel knowledgeable enough on the subject to send people screaming to the back of the bus when I get on board. Because when I get stuck on a certain ingredient like this, not only is it all I cook. Itâ€™s all I talk about. Which makes me a little unpopular at dinner parties, but I feel I must pass this information along. Especially when I have a captive audience. I mean what are they gonna do, get up and leave the table (againâ€¦)! Get ready for mint, mint and more mint!

At least I got examples from each of the three Categories: Green, Red and Gray. These monikers are not scientific classifications. But I think they help cooks understand the various mints and know which to use when, where and how. 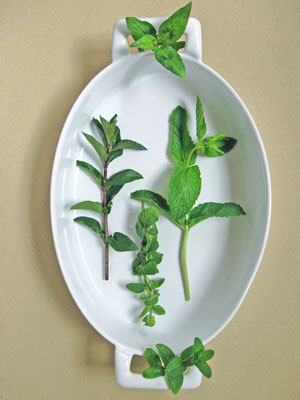 The spearmints, or green mints, are the ones most often used in cooking. They have the typically strong herbal flavor you have come to expect from mint. I picked up the standard bearer simply called Spearmint, and a smooth leaved hybrid of Spearmint too. Other green mints are: Kentucky Colonel Mint, Curly Mint, Lemon Bergamot Mint and Swiss Mint.

Your red mints are very strong flavored. They include Basil Mint, Moroccan Mint, Lime Mint, Orange Bergamot Mint, Chocolate Mint, Lavender Mint and, of course, Peppermint.  They should be used sparingly when fresh. Thatâ€™s because they contain menthol (which spearmint does not). It is the menthol that makes Peppermints good for soothing upset stomachs. It is also the chemical that tricks your brain into thinking there is something cold in your mouth. But Iâ€™ll let a scientist explain why by paraphrasing one named Harold McGee: â€œmenthol binds to receptors on temperature-sensitive nerve cells in the mouth, causing those cells to signal the brain that they are cooler than they really are (anywhere from 7 to 13 degrees).â€ I picked up Peppermint, which I am going to dry and use culinarily. I also got the exotic sounding Moroccan Mint.

Finally there are the lesser-known fuzzy gray mints. These are also considered cooking mints. They include Egyptian, Apple and Pineapple Mint. I have the Apple Mint and I am going to make a simple and sweetly refreshing Apple Mint Tea.

This tea is oh so subtle. It is vaguely minty, vaguely floral. Not unlike chamomile. I personally would not say it tastes like apples. But it does have a slightly fruity essence. 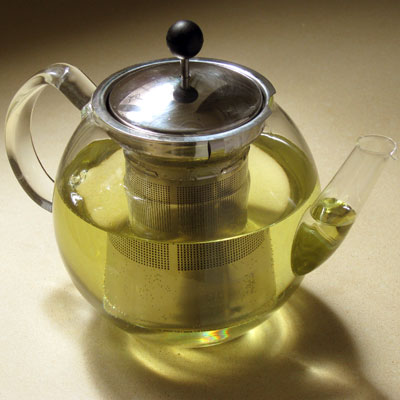 It is definitely a quiet tea, for quiet contemplative moments. Itâ€™s flavor is that delicate.

You can drink it hot, but I often enjoy it very, very cold. Which is not the same as iced. Because water based ice-cubes would quickly dilute this gentle tea down to the point of altering its delicate nature.

Instead, pour half of the tea into an ice cube tray and freeze it. Store the other half in the fridge. When it is time to enjoy that quiet moment simply add the cubes to the glass and pour some of the tea over the cubes of frozen apple mint tea.

Stick the Blackberry in a drawer. Take the phone off the hook. Put the computer to sleep. Make sure the TV is turned off, and the kids are out of the house. Because that is the kind of quiet moment this tea calls for.