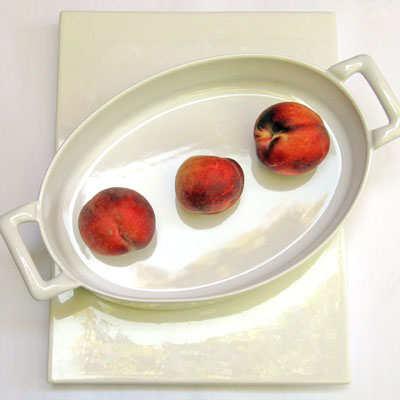 I don’t know how to break this to Georgia, the supposed peach tree state. And to my friends in Bedford, NY that think New York peaches are ‘all that’. They are going to be devastated.

But California ranks first in the U.S. in the production of peaches, producing 71% of the total U.S. crop. We produce nearly 100% of the peaches destined for the can, and an impressive 50% of the fresh market peaches. These facts are facts. And from these facts we can deduce that California must grow some pretty damn good peaches. Case closed.

Peaches are at the very height of perfection right now in California, so I ran down the hill to the Hollywood Farmers Market and picked a peck of them for this week’s Market Matters post. 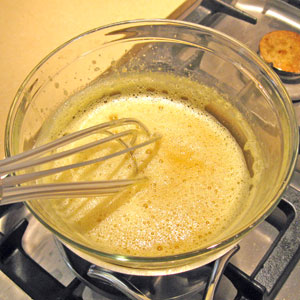 During World War I, peach pits were gathered, ground and then used as filters in gas masks.

Peaches were brought to California by Russian immigrants and soon became well established during the gold rush when settlers began growing and preserving them for commercial sale to miners.

The peach belongs to the rose family.

China is the original home of the peach tree.

There are two categories of peach, Clingstone and Freestone, distinguished by the ease with which the edible area pulls away from the stone (pit). 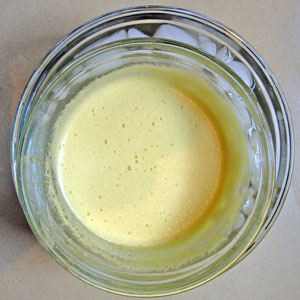 There are over 200 varieties of peaches, each with their own specific harvest time, flavor and color characteristics.

I realize you are probably thinking, “cut to the chase, Greg, all this qualifies as useless information”. But as I have said before, I think useless information is very useful. It comes in handy at dinner parties, business lunches, and trips to the grocery store, the dog park, and even the dentist’s office. Anywhere you have an audience that thinks it might be rude to interrupt you.

But the simple, useful truth about peaches is they are delicious.

Speaking of simple. I am going to pair these simply delicious peaches with perhaps the simplest of all desserts. But don’t confuse simple with boring. Because I am making delightful, delicate Italian treat known as zabaglione. 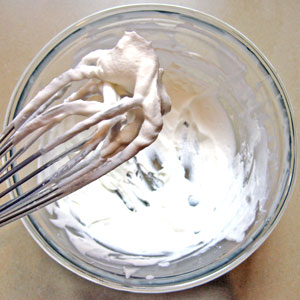 But you may know it as sabayon, zabaione, zabajone, sambayon, sabajan, or ponche de crema. Even that classic Christmas concoction known as eggnog is not too far off the original zabaglione (not the kind in the carton, though…).

No one really knows where zabaglione originated. Some credit San Bajon, a 16th-century monk from Turin, with the dessert’s invention and name. Others believe the Venetians or the Medici family in Florence came up with it.

Technically, a zabaglione is a caudle, a hot, wine-fortified drink made as a healing draught for a sick person. The noun later morphed into the verb ‘to coddle’, meaning ‘to treat with extreme or excessive care or kindness.’ In it’s chilled form it starts to become very pudding-like.

The basic recipe is simple to memorize. It’s a 1:1:2 ratio of egg yolks, sugar, and wine. Then the mixture is lifted and lightened through the incorporation of an airy, whipped substance. Traditionally egg whites, but more commonly these days, cream.

Marsala is the traditional wine to use in this dessert. But Sup’s! going to mix it up and use prosecco and a bit of peach juice.

Prosecco and Peach. What’s that remind me of?

Ah, yes. A Bellini Cocktail.  Which according to Wikipedia ‘was invented sometime between 1934 and 1948 by Giuseppe Cipriani, founder of Harry’s Bar in Venice, Italy.’ It started as a seasonal specialty of the bar, so I think it’s the perfect inspiration for this very seasonal peach dessert. Grilled Peaches with Bellini Zabaglione. 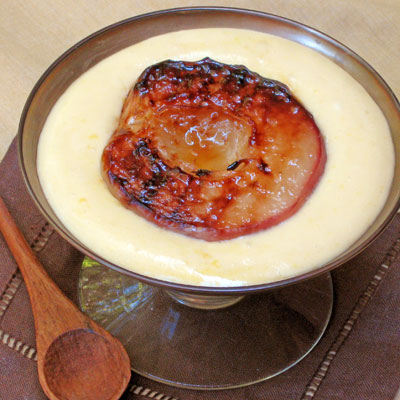 Set the bowl over a large pan of simmering water. Whisk constantly until the mixture is very frothy, thick and has expanded in volume, about 10 minutes. Place bowl in ice bath; let cool completely.

Place cream in a large bowl, and beat until stiff peaks form. Fold whipped cream into egg-yolk mixture. Cover with plastic wrap, and place in refrigerator at least 20 minutes.

Line grill or pan with heavy-duty foil. Brush peaches with butter; sprinkle with the remaining 1 tbsp sugar. Grill cut side down until peaches are tender and sugar is caramelized, 6 to 7 minutes. Divide sabayon among four dishes, and top each with a peach half. Serve.

I adapted this recipe from Martha Stewart Living