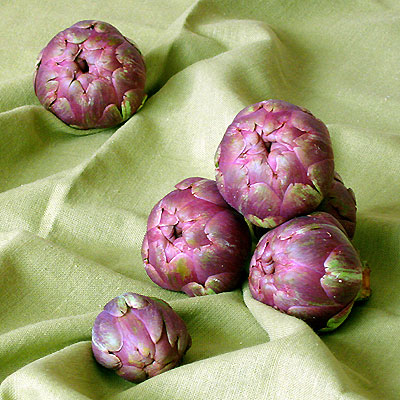 Sometimes I just have to fall back on my instincts, and sometimes I have to fall back on somebody else’s instincts. Especially if that somebody is a well known local chef. Today is just such a day. You see I was down at the Hollywood Farmers Market this morning and I had friends with me from San Diego. We really had our minds set upon a meal we were planning together so honestly I wasn’t too focused on my post for today’s Market Matters.

But as we were leaving I privately started to panic because we had lots of great stuff, but not a thing for my post. And while it’s true the choices seemed limitless. I needed something I could make quickly and painlessly– because with the rest of the meal looming I just did not have time to spend cooking too many extra things today.

That’s when I saw these babies.

Okay, you have to understand that I store information about food in my head the way most Angelenos store obscure rush hour short cuts. You never know when your gonna need it, and you have no idea where the information comes from but there it is, like magic; just when you need it.

What I am trying to say is I ended up reaching back in my memory banks and stealing an idea from a local chef named Evan Funke. Because I came home with a bunch of baby purple artichokes. It may sound like a great choice (and it is), but it was not really MY own unique, one-of-a-kind choice. It’s not what I set out to do. 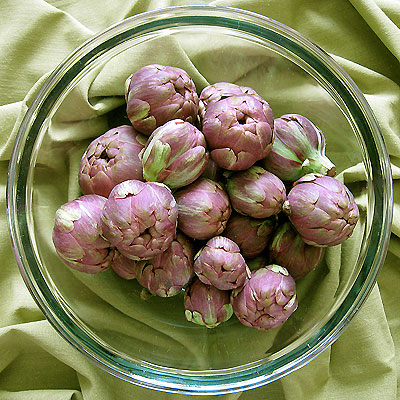 A fried artichoke is not exactly a revelation to me. I have done this before, in fact I have done this before right here on this blog. I even have a few good cooking tricks that can help transform these into an addicting (and popular) party appetizer. They are easy to make and have a huge payoff in the taste department. So I will give myself some credit.

Nope, its not the idea of a fried artichoke that I stole. I stole the way Evan Funke suggested prepping the artichokes.

I had always quartered or halved my artichokes after a little trimming and popped them in the hot oil. But Evan described a method where the tops are trimmed and then the leaves are pulled open and flattened. It makes them look like a flower. He said it’s the way they do it in Italy. Now I have been to Italy and I have eaten fried artichokes but they were not prepared this way. That’s why his words were a revelation to me.

By flattening the artichokes and opening them up, more areas of the leaves come in direct contact with the oil. You get wildly crunchy artichoke “petals” and a perfectly tender heart. My previous method gave me only a few (over) fried tips and (sometimes) left the heart a bit undercooked (depending on the size).

These purple artichokes are little pieces of art too. They are a bit bigger than a golf ball and nearly as round. So they seemed a perfect candidate for this method of preparation. The artichokes I have fried before were green and more conical in shape once trimmed.

As he described, I trimmed away a few of the tough outer leaves. I did not have to take off more than 3 or 4. That is how tender these little guys really are. I then chopped off about 1/3 of the top of the artichoke and trimmed the stem down so that the artichoke could sit flat.

Using my fingers I pried and prodded the leaves open some. I then inverted the artichoke and gently flattened them a bit more using the palm of my hand. Gently is the key word here. I broke one apart on my first attempt. 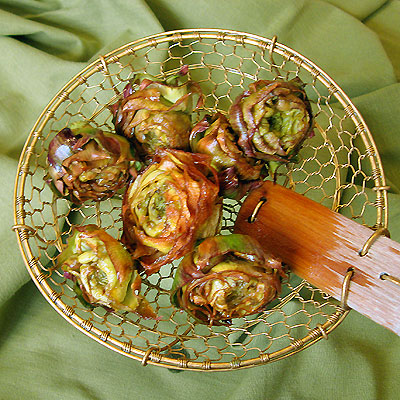 Like French fries, I find it best to blanch artichokes some before the final fry. So I tossed them into 300 degree F oil, for about 2 minutes. I then removed them to a paper towel lined plate to drain (upside down). I find it best to work in batches so do not crowd the fryer.

But unlike French fries, which I prefer to cook in peanut oil, I fried these artichokes in half olive oil and half peanut oil. It is a great flavor companion and worth the extra cost. You donâ€™t need the very best olive oil either. Something from the bottom shelf of your grocers or from the bulk foods aisle is fine. But olive oil has a much lower smoking point than peanut oil; so do not leave it unattended.

You should drain them well and give them a good sprinkle of excellent salt (I am talking Maldon here) and a bit of pepper. A little spritz of lemon juice is good too. But you MUST eat them hot to fully enjoy their textures!

So maybe you won’t be giving me too much credit for originality this week. But if you make these artichokes you won’t care who I stole the idea from– because you will love them baby! 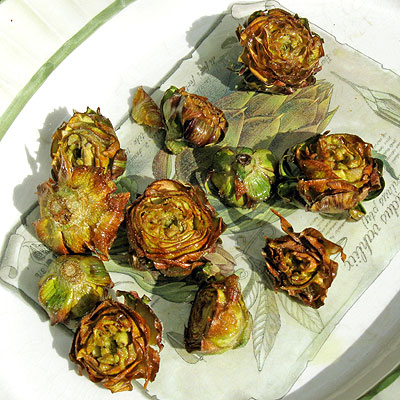 The first fry is to blanch only so heat your oil to 300 degree F oil. Dry the artichokes off well before continuing. Drop a few at time into the oil for about 2 minutes. Remove them to a paper towel lined plate to drain (upside down). Work in batches so that you do not crowd the fryer.

Drain them well and give them a good sprinkle of excellent salt and a bit of pepper. A little spritz of lemon juice is good too. But you MUST eat them hot to fully enjoy their textures! 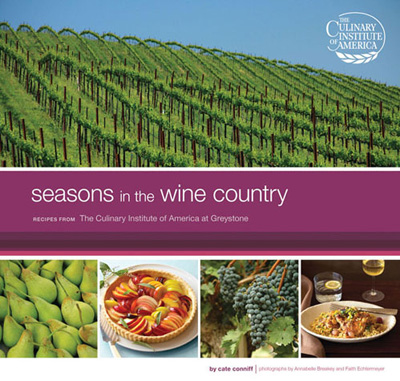 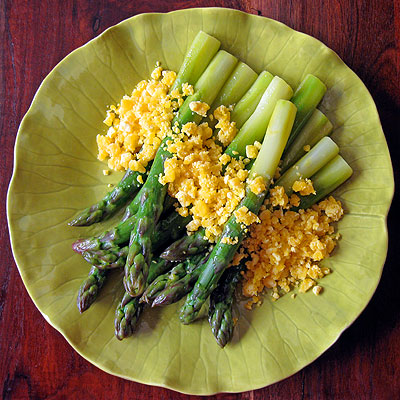