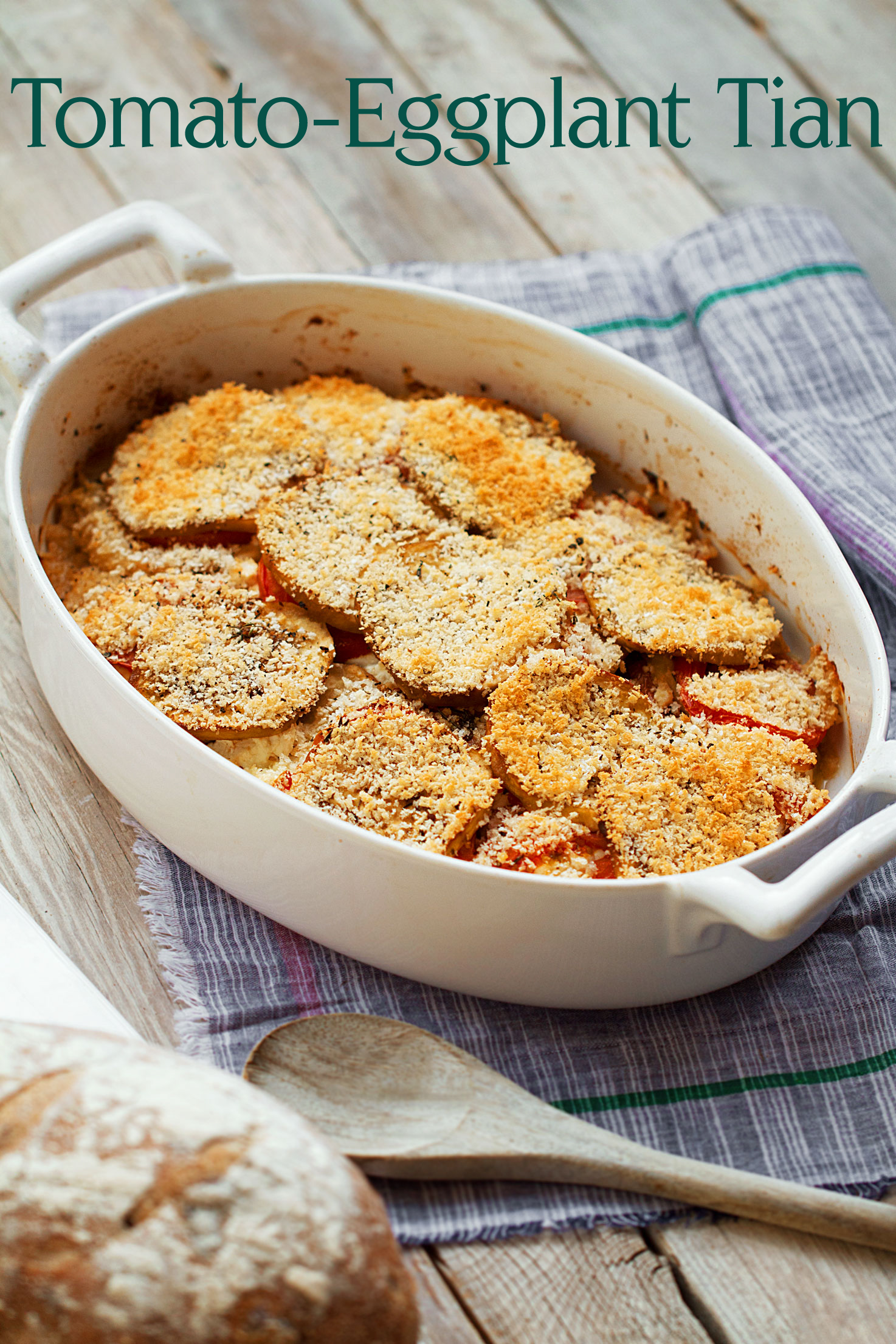 Summer always seems far too short. But this year, more than ever, I’m not ready to let it go just yet. I live in Los Angeles so I know we’ll have more sunshine. Still, I can feel the nip in the air despite the golden glow of summer’s last light. There will be more dinners outside and I’m sure to dangle my feet in the pool a few more times. However, the lure of sweaters and soup is just around the corner. So for now, I’m hell‑bent on keeping summer going as long as I can with this Tian Provençal.

Originating in sunny Provence, tian is a French word that describes a shallow ceramic casserole dish as well as the food it contains. Traditionally it features a variety of vegetables, herbs and cheeses layered and baked – much like a gratin (or even a casserole). You’ll often see the ingredients carefully constructed with beautiful rounds lined up in a repeating pattern (à la Thomas Keller in the movie Ratatouille). Which is an arrangement that very much appeals to the artist in me. However, the vegetables in my Tomato-Eggplant Tian Provençal are laid into the dish in a more casual manner. Which, in my opinion, has its own artful elegance well-suited to the late season glut of vegetables we’re seeing at our farmers market.

In fact, it was a bag of gnarled end-of-season tomatoes and a couple of collasal eggplants that inspired the casual approach to this tian. I served it as an open-faced sandwich on lightly toasted olive bread at what I know will be one of the last languorous meals the season. GREG 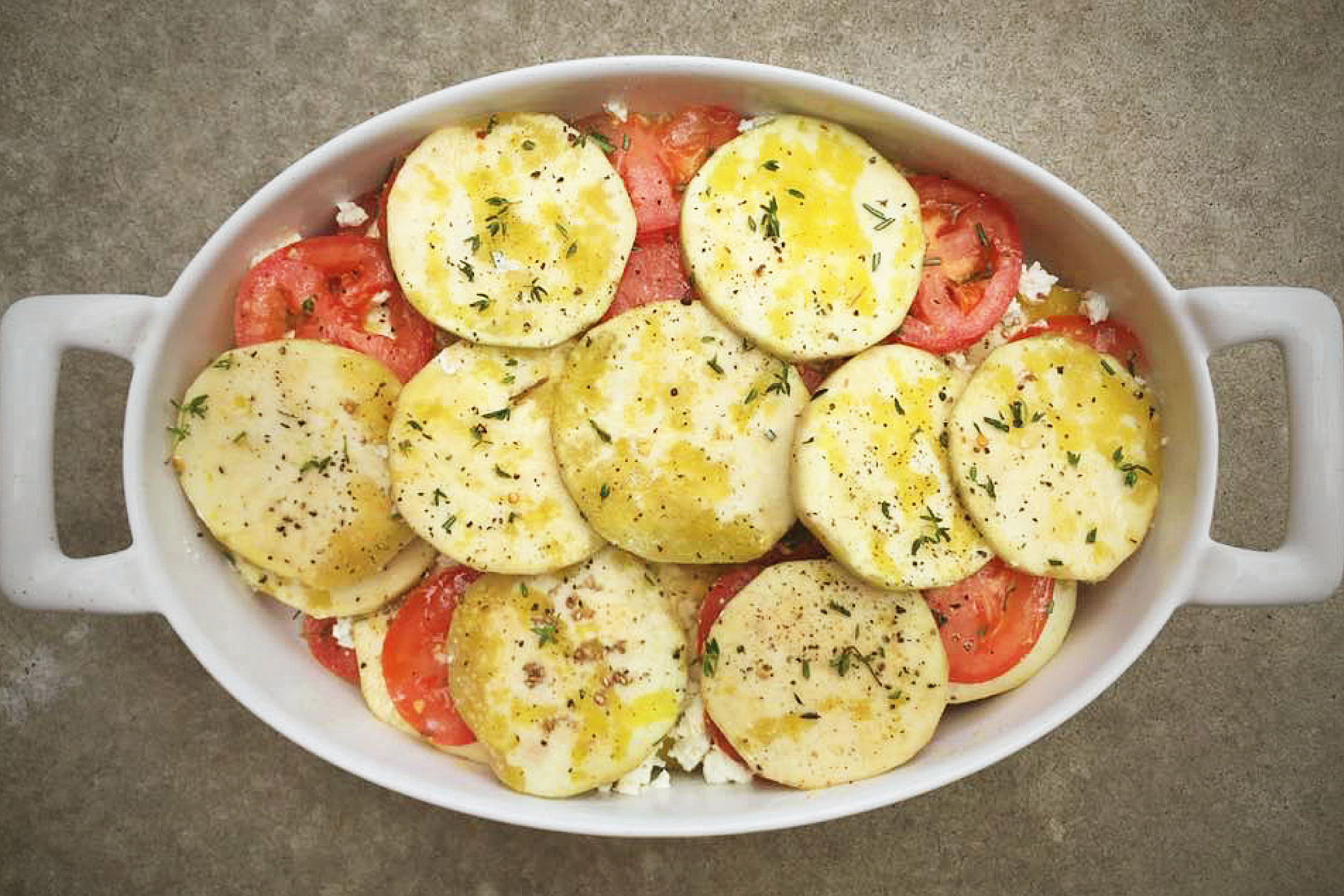 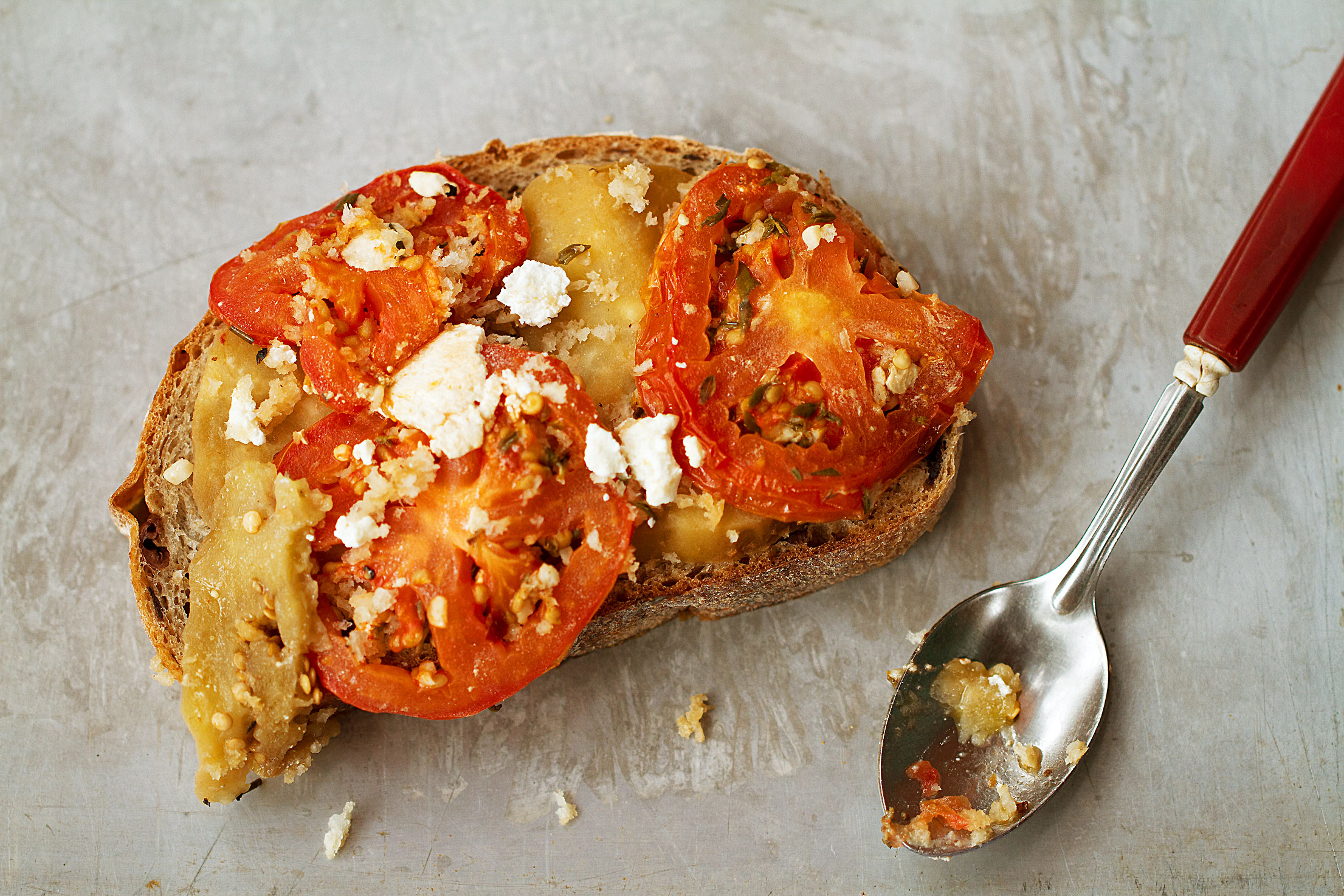 This dish is delicious served warm from the oven, but it’s even better served at room temperature the next day. 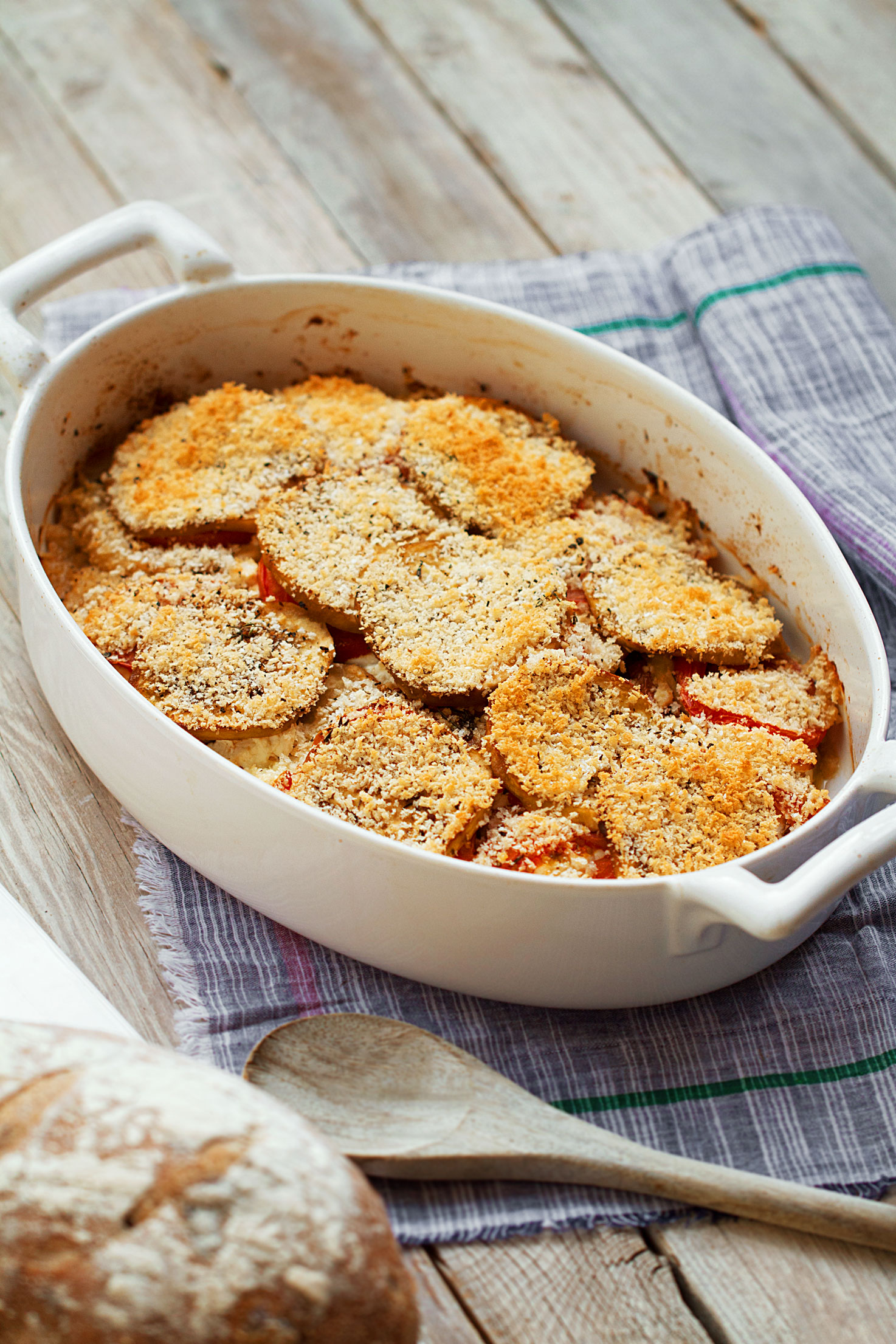 Peel the eggplant and then slice crosswise into thin rounds (about ⅓ inch thick). Place the slices into a large bowl and toss them with half the thyme leaves, rosemary leaves, garlic, 1 teaspoon salt, red pepper flakes, and ¼ cup olive oil. Set aside.

Slice off the stem end of the all the tomatoes and discard. Slice the rest of the tomatoes crosswise into thin rounds (about ⅓ inch thick). Place the slices into a large bowl and set aside.

Sprinkle the panko and remaining thyme leaves over the top evenly and then drizzle generously with additional olive oil. Season with salt and black pepper.

Transfer the dish to the oven and bake until golden and bubbly, about one hour. Serve warm or room temperature scooped on top of olive bread slices and drizzled with very good extra virgin olive oil. 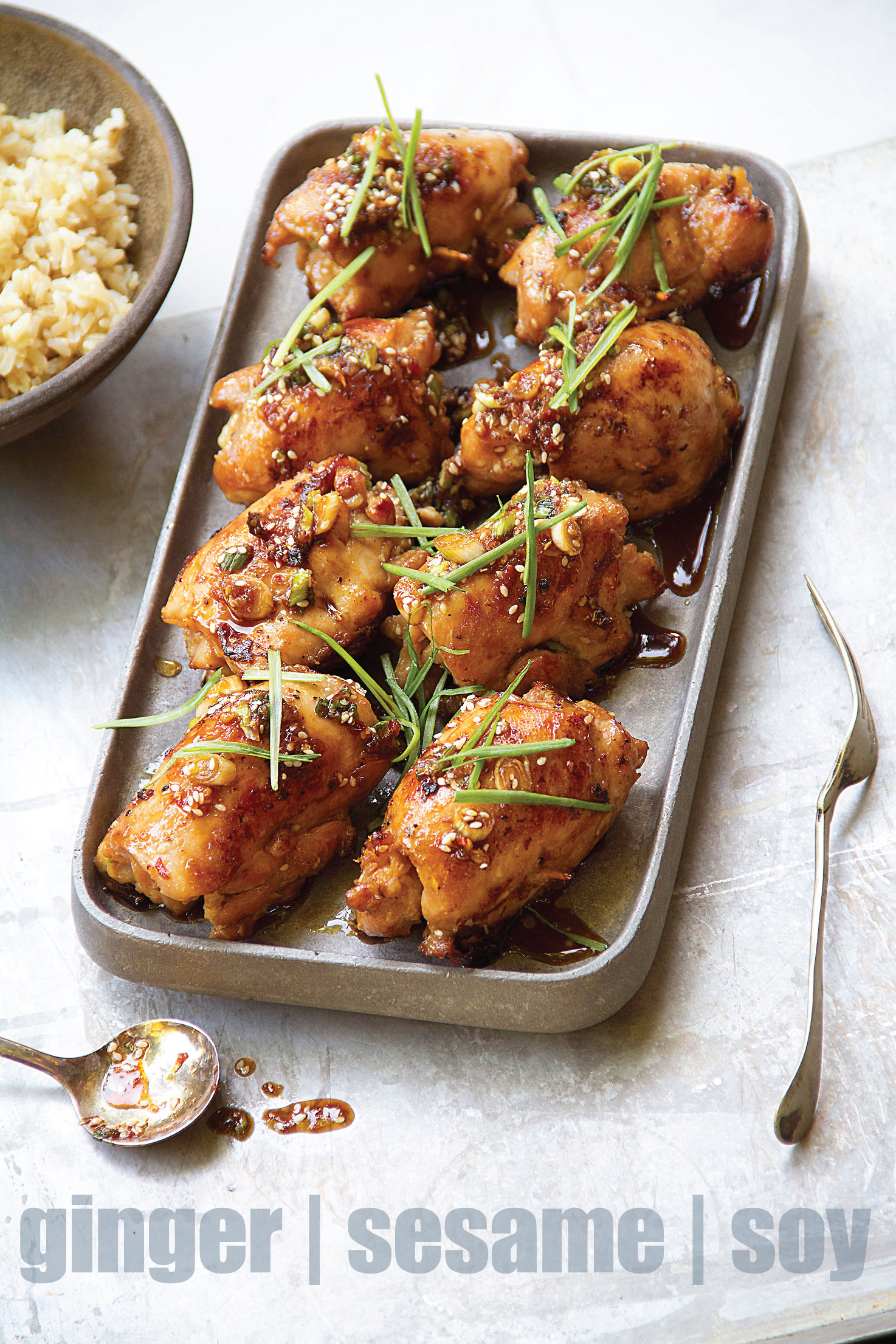