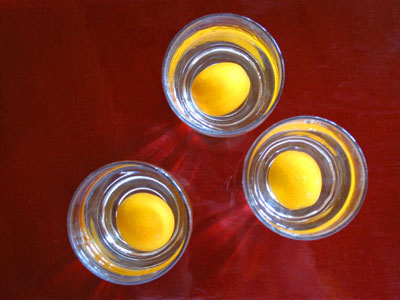 People have been asking.

So I think it is time for a taste test and an update on the status of my vodka-steeped-kumquats.

I am creating a kumquat liqueur similar to limoncello. In case you were born in a cave and are clueless about my experiment click on over to my first post on the subject. Read fast, the rest of us are waiting.

My kumquats have been steeping for 17 days. That’s a bit longer than the 2 weeks my lemon peels took to give up their entire flavor when I made limoncello (lemoncello??).

I am guessing, that using the whole kumquat (as opposed to just the yellow zest of lemons) is responsible for this difference.

Tangled Noodle inquired on the progress of this project last week. So I tasted it for her. 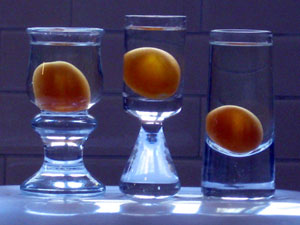 At that time I noticed a very pronounced bitter flavor. Not unlike a kumquat entirely, but very one note. Very constricted around the bitter flavors found in good kumquats.

It was not horrible. But there was none the herbal sweetness that makes the sour pucker of a kumquat work so well. I certainly felt the addition of simple syrup was going to be necessary.

Today’s test taste revealed a lot more of the real essence of a kumquat.  So I am getting excited.

The kumquats have indeed given up some of their color. They are noticeably less intense an orange color and the alcohol they are in has taken on a very slight orange blush.

The “nose” on the liquor still has the faint burn of alcohol. But I most definitely get an herbal note and the beginnings of a true citrus scent.

The real difference was in taste. I liked what I was drinking. I brought it to my office and sipped while blogging. Which has gotten me in trouble before…

But do not worry. I am not going to power down a liter and a half of kumquat-scented vodka. I can be obsessive, but I have my eyes on the real prize. So after one nice shot I put the stuff back in the cabinet to keep steeping.

The taste test revealed that the herbal citrus qualities are coming to the front. There is still that bitter element, but when paired with the sweetness it becomes a pleasant part of the experience.

The color tells me we still have a way to go. But at this stage I am feeling pretty good about the journey (hiccup).

Which brings me to the name. We have some quality contenders including:
Bonboncello & Kumquarino from Tangled Noodle
Fortuncello from Papawow
Kumquatico, Kumtreau & K‑Juice from Amanda (no url sorry)
Bomba di gusto from Anonymous (no url either)

There is still time for plenty of other suggestions. I have been calling it Kumquacello in my head. But that hardly rolls off the tongue. Which is why it stays in my head.